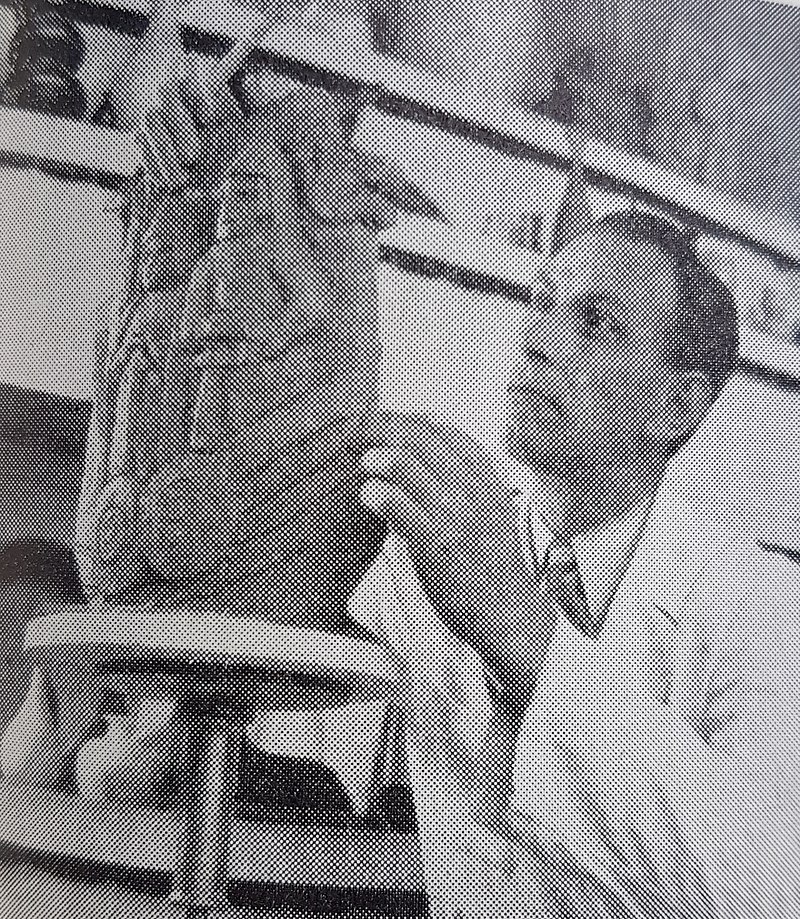 This month we are delighted to be able to offer for sale a collection of 23 ceramic pieces by Gunnar Nylund.  Nylund is one of the most important names in Scandinavian design and a pioneer in both ceramics and glass. His work helped to shape the look of these objects from the 1920s to 1970s.

Nylund was born in 1904 to a Danish mother and Swedish-Finnish father. They had to flee Finland to Denmark during the civil war in the early Twentieth Century. Both of his parents were artistic and he decided to pursue studies in architecture. Before that he also took an apprenticeship in ceramics back in Finland. While studying architecture he also worked with his father producing ceramics. His first break came they were commissioned by the Danish company Bing und Grondahl to produce some designs for the Paris Exhibition of 1925 – this was the world fair that really launched the Art Deco style internationally. Following the success of this commission in 1926 Bing und Grondahl offered Nylund a job which he took. 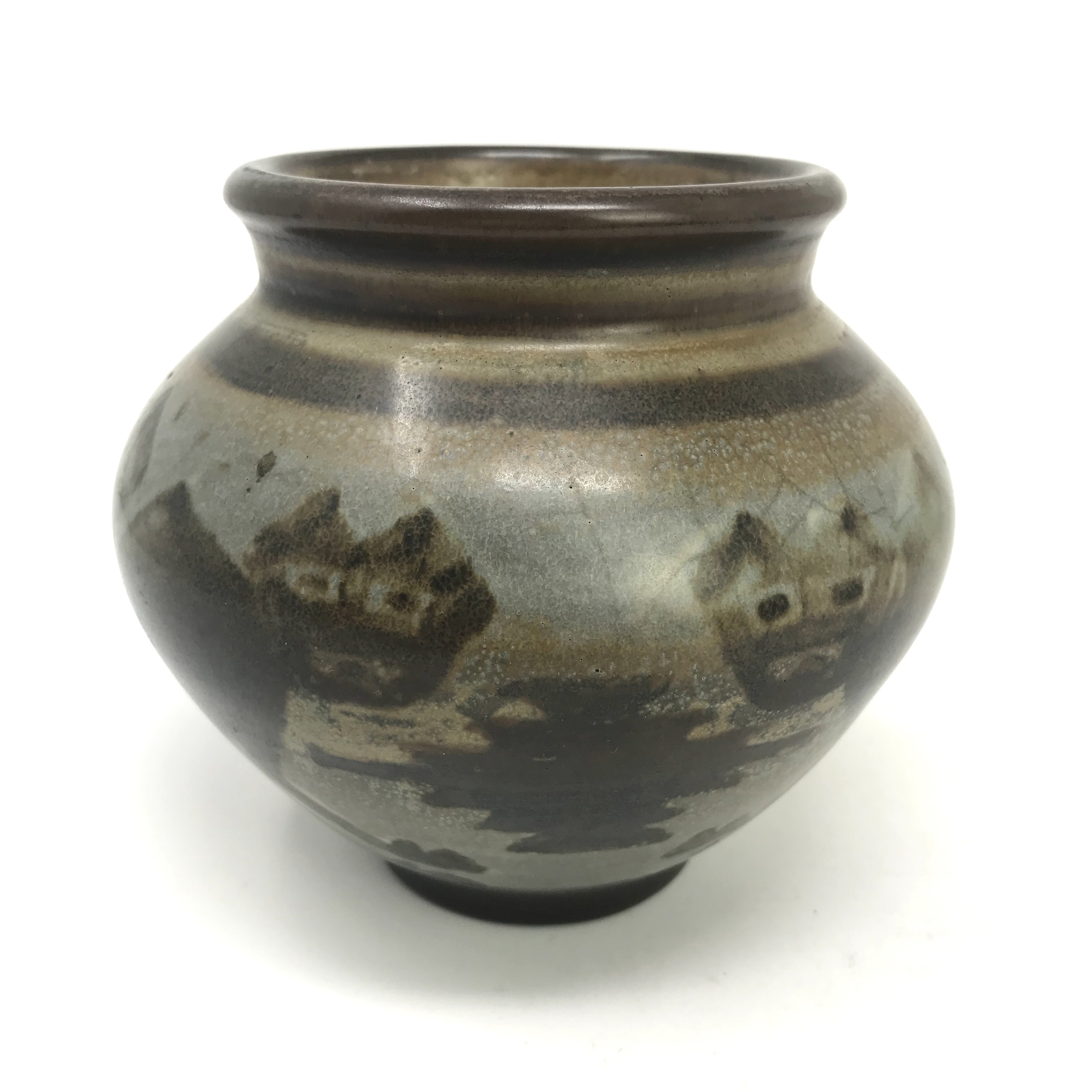 While at Bing and Grondahl Nylund worked under the supervision of Jean Rene Gauguin, son of the famous painter Paul Gauguin. Axel Salto would have worked at the factory at this time as well. In 1928, having become somewhat bored with the stylistic limitations of working at a large porcelain factory, Nylund decided to set out on a new venture. He teamed up with the chemist Natalie Krebs, who also worked for Bing und Grondahl, and they set up their own studio.

Nylund and Krebs, as the studio was originally called, was located at the former studio of pioneering Danish ceramicist Patrick Nordstrom. Nordstrom, the so-called founding father of the Scandinavian stoneware tradition, had died in 1929 and when his studio became vacant Nylund and Krebs began producing their stoneware ceramics there.  The earliest pieces were marked with their names Nylund and Krebs in 1929 but they soon decided to change that and renamed the studio Saxbo, the now famous Danish stoneware makers that ran from 1930 to 1968 when Natalie Krebs retired and famously destroyed all her glaze recipes to try and stop copies being made.

Nylund stayed at Saxbo until 1932. He then moved to become artistic director at the Rorstrand factory in Sweden. Rorstrand, along with ALP Lidkoping, had been acquired by the Finnish  Arabia factory, the parent company, in 1929. Under the leadership of Fredrik Wehje they looked to capitalise on the interest across Europe in art pottery that had grown out of the arts and crafts movement and which was attracting new middle class buyers interested in both craft made objects and modern design. Nylund was the key designer Rorstrand took on at this time and he had a high level of artistic freedom to develop the style of ceramics at the Factory.

Nylund was a great experimenter in clays, shapes and glazes and produced a wide range of designs in his 28 years at the factory until he left in 1958. His early work for them was very much in keeping with the Art-Deco style that was popular at the time. He can be seen as an important contributor and innovator in that style. His best known pieces from this period include his rough textured glazed pieces made with Chamotte clay and his highly decorated flambé wares. These included painted decoration in either geometric patterns, often with gilding, or ornate painted scenes typically either of classical or pastoral scenes. 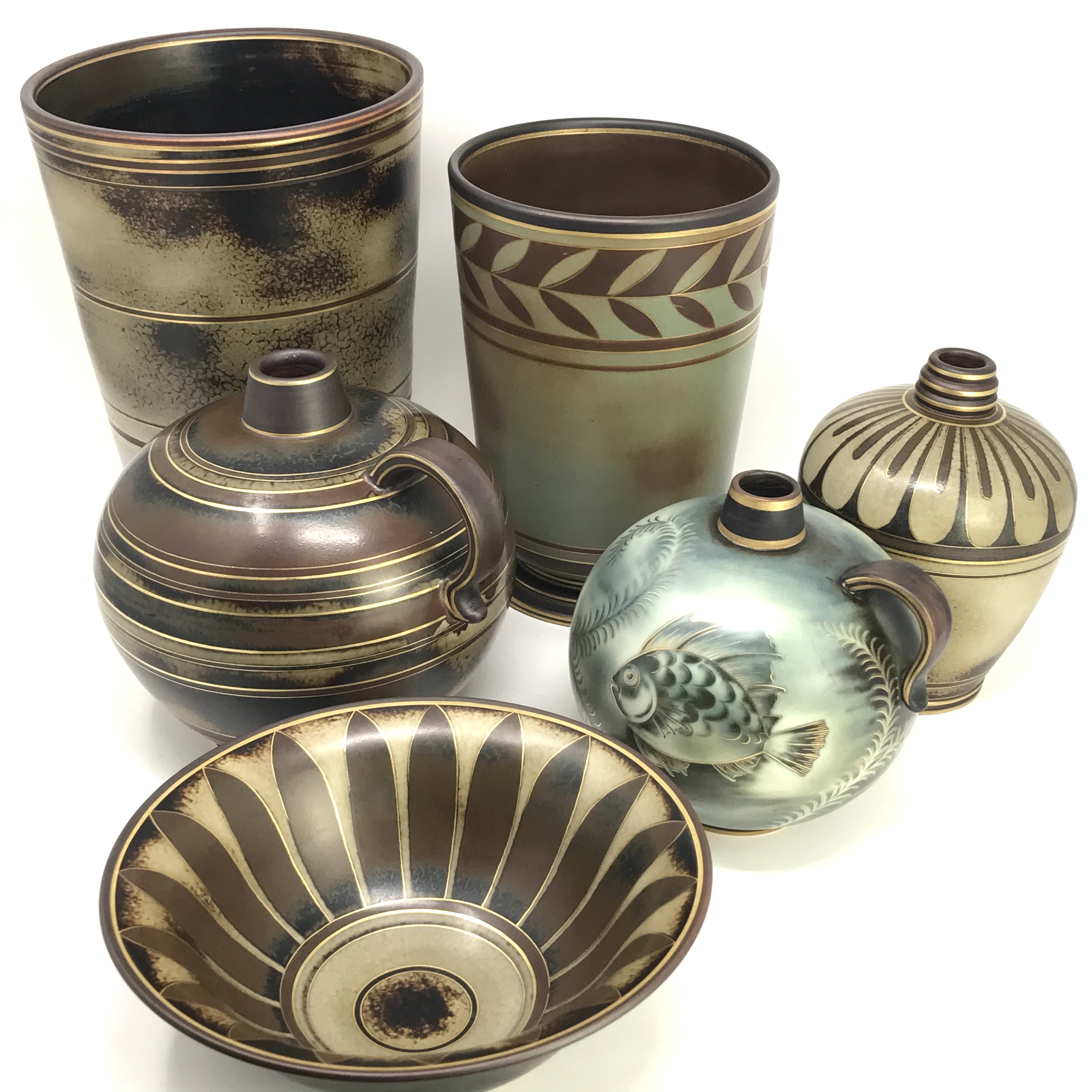 High quality designs were produced in these early years that are amongst the best ceramics from that decade. But Nylund’s pioneering style really came into its own in the 1940s. Neutral during the War, Swedish factory production was less disrupted than in other countries and designers were able to take forward new styles that had begun to tentatively emerge in the late 1930s. The move away from the angular and geometric style of art deco, while retaining its clean lines, saw the emergence of a softer, more freeform or biomorphic style. This is the epitome of Scandinavian modernism and Nylund was one of its early pioneers. 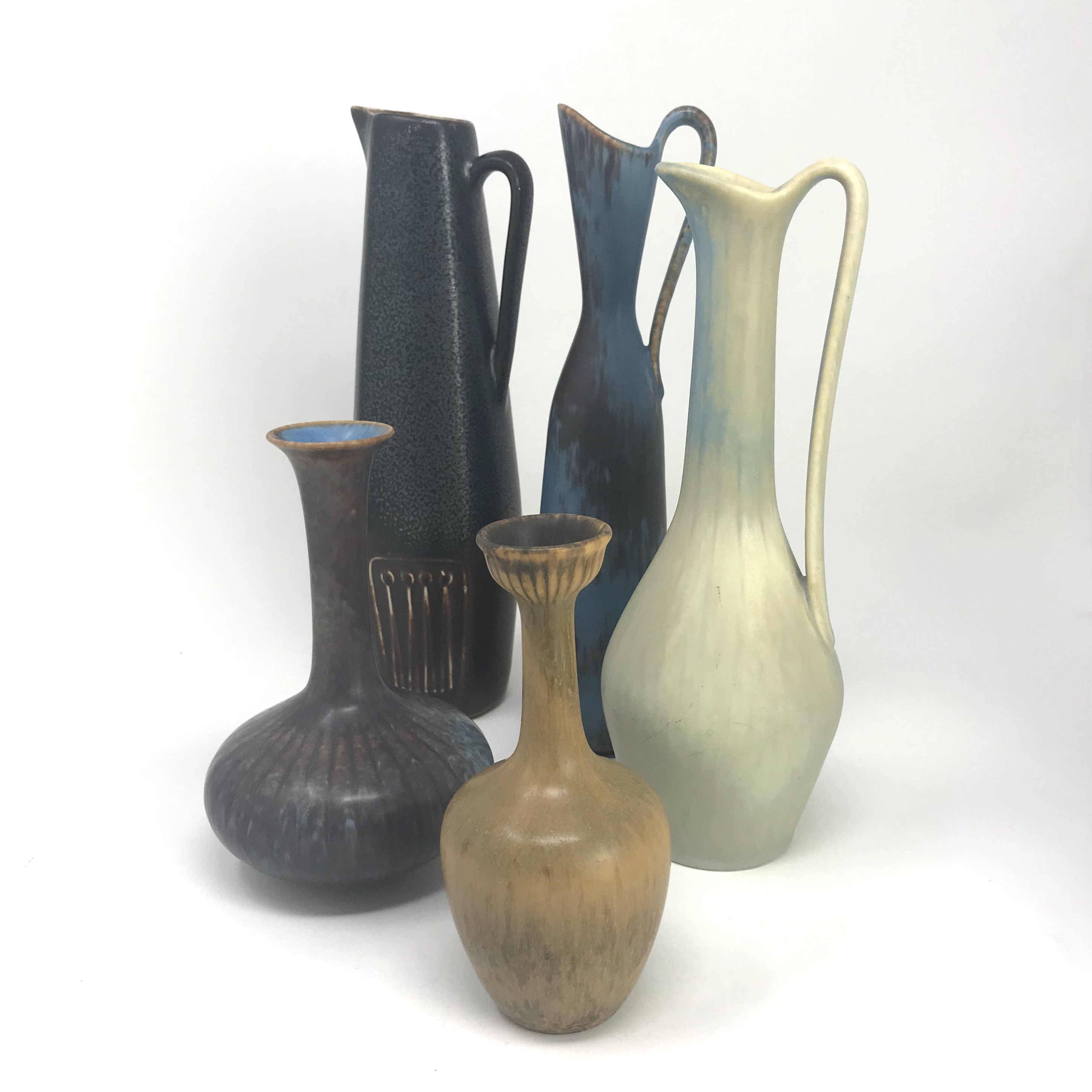 Tall, slender vases, solid looking jugs with rounded handles, hand decorated pieces that were uniquely painted, and animal sculptures, Nylund’s designs in the 1940s were a clear departure from what he and others had produced before. And it wasn’t just about experimentation in shape, he also experimented with glazes too with use of Haresfur glazes, oil spot glazes, and others all finding their place. But it was in the 1950s that the real move to biomorphic and neo-functionalism in style emerged.  But by then Nylund was no longer alone in promoting this style.  As well as designers like Berndt Friberg and Stig Lindberg at Gustavsberg, the main competitor factory, Rorstrand’s new protégé Carl-Harry Stalhane, who  had originally been taken on by Nylund in 1939 as a ceramics painter, were all starting to experiment in this new style too.

Typically they took inspiration from much earlier Chinese ceramics that used a single matt glaze on a simple shaped piece of ceramic. But these Scandinavian designers gave their pieces a modern twist with modern curves, use of asymmetrical styling and new forms inspired by nature. Nylund continued to innovate producing some beautiful shapes with subtle glazes which changed each year of production. Perhaps best known from this period are his tall ewers that seem to typify the 50s style. As that style caught on many of these art pottery styles begant to influence the introduction of commercial ranges that were sold more cheaply in department stores rather than in galleries and that approach continued into the 1960s.

Gunnar Nylund left Rorstrand in 1958 and took up several commissions including designing ceramics for the Danish company Nymolle and the Swedish glass factory Strombergshyttan. Towards the end of his career he was also commissioned to produce a significant number of public sculptures and friezes in ceramic for newly developing town and city centres. He retired in the 1970s but continued to sculpt and produce ceramics for himself right up until his death in 1997. His works are held in museums across the world.

2. An appraisal of the work of Gunnar Nylund

Nylund’s work is vast and spans a period of about 50s years. He was innovative throughout his career and can justly lay claim to being not only one of the great Scandinavian ceramicists but one of the Twentieth Century’s great ceramic pioneers. A key difference, though, from other great ceramicists of this era is that Nylund is best known designer rather than a studio potter who only hand produced his own unique pots. He did throw his own pots, especially in the early years, and glazed and decorated them too, but most of the work that carries his name was made by someone else, who worked at the factory, to one of his designs.

This was a common approach in the Scandinavian countries during the Twentieth Century and was later copied elsewhere (i.e. at Poole Pottery in the 1950s/60s). Factories like Royal Copenhagen, Arabia, Rorstrand and Gustavsberg all had art pottery sections in the factories that also mainly mass produced other things like tableware. Some of their art pottery went on to inspire mass produced ranges and other pieces were sold more exclusively in galleries and in specialist retailers as art pottery. There were small studios too, with a potter making his or her work alone, especially in Denmark, but the great innovators and popularisers of Scandinavian modernism were these art departments in the major factories.

The quality of piece that bear the name of Gunnar Nylund can be more variable than some other leading figures. For sheer potting and glazing technique Berndt Friberg is undoubtedly better overall. And both Stig Lindberg and Carl-Harry Stalhane, the new generation, were eventually to go on to greater innovations than Nylund in the post war period. While some of the glazes on Nylund pieces can be a little clumsy at times other pieces when at their best  are as subtle and sophisticated as any produced.  Some of the very finest pieces that bear the name of Gunnar Nylund, whether 30s Flambé pieces, 40s jugs and bowls with spot glazes or 1950s pieces with soft haresfur glazes can be amongst the very finest pottery produced by anyone in the Nordic countries during that time.

We include 23 pieces in our selling exhibition across the period from the 1920s-60s. We have not yet been able to track down a Nylund and Krebs piece to sell, these are very rare and highly sought after. We do, though, have a very early unique bulbous vase with a design of two cats for Bing and Grondahl made in about 1926. This has the Nylund monogram in use on those pieces and the letter u on the base. Whether the u is for unik/unique or part of an alphabet numbering we are not sure. Other pieces from this time, all very rare, usually carry an individual number. We think this is probably one of the first pieces he made after joining the factory in 1926. 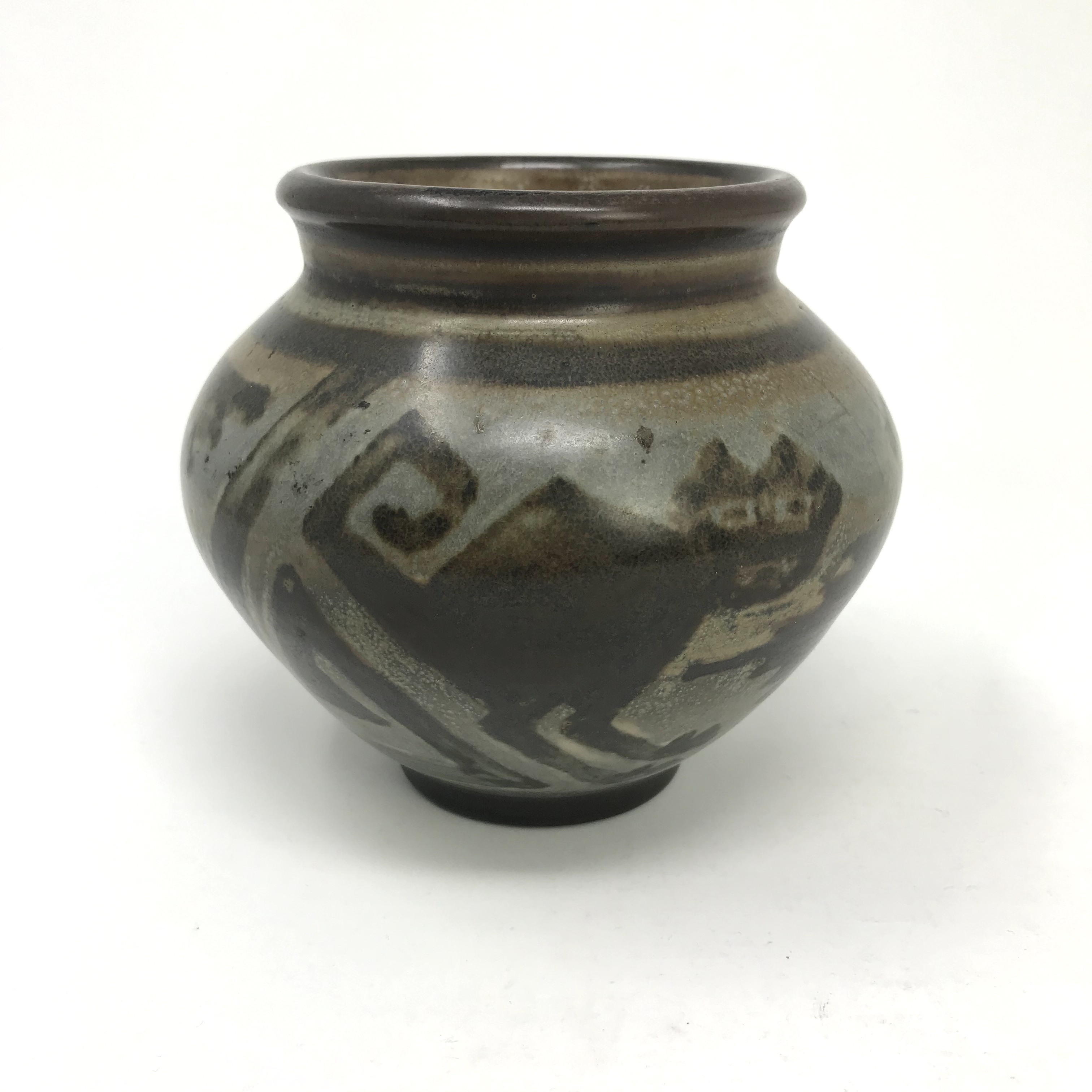 Another view of the Bing and Grondahl pot from c1926

The other Bing and Grondahl piece we have, a very tall vase with a green and brown glazes marked model Nylund is a little later from 1937/38 after he had left the factory but designed while he was still working there a decade before. 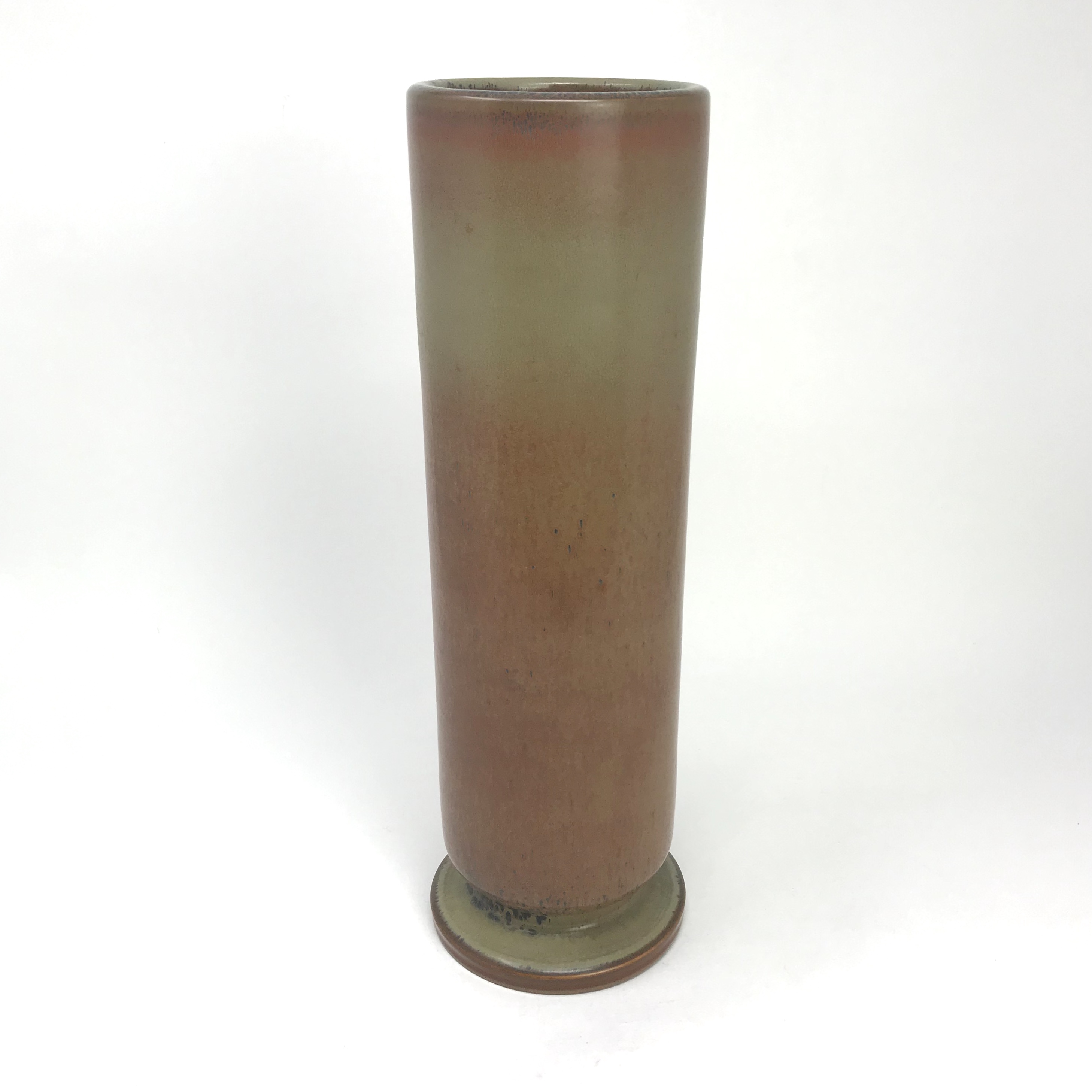 We have a good selection of flambé pieces made throughout the 1930s, most have stylish geometric patterns and there is also one with a pastoral harvest scene and another with a superb fish pattern. 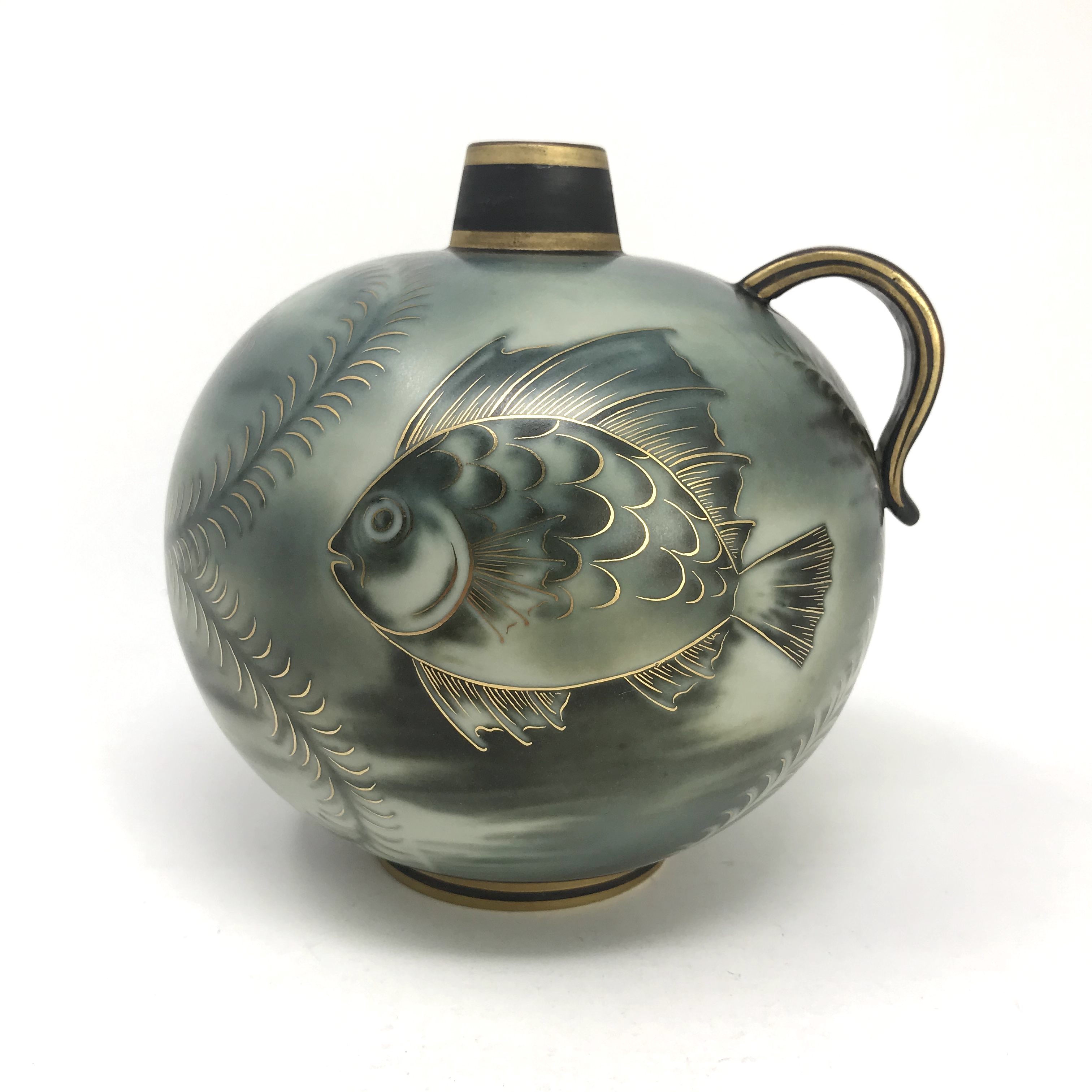 Our collection includes a number of other pieces from the 1930s and 40s including a unique bowl probably made by Nylund himself. And the 1950s are well represented with some beautiful ewers, jugs, bowls and vases. We also have a piece from the 1960s and a small Nymolle pot. Finally there are a couple of ewes from his more commercial Farina range.

Included here are some pictures of the marks found on Nylund pieces. The flambé pieces are particularly complex as some are marked for ALP Lidkoping some for that factory and Rorstrand and some just for Rorstrand. All but one of the pieces in out exhibition are factory first pieces. A factory second at Rorstrand is easy to identify by a line scratched through the R after production to suggest that it was good enough to sell but not of first quality. While this is not an exhaustive list it should serve as a useful guide. 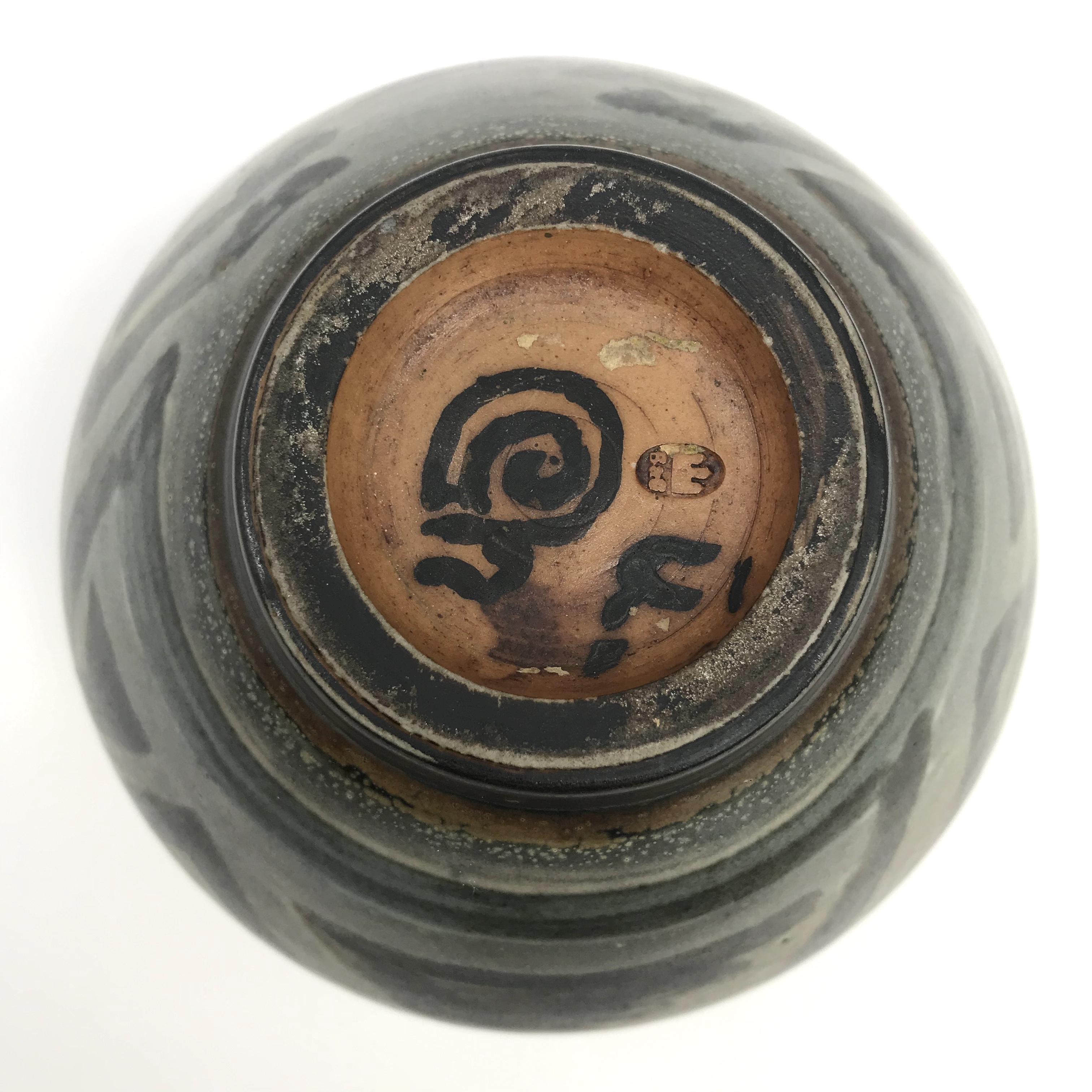 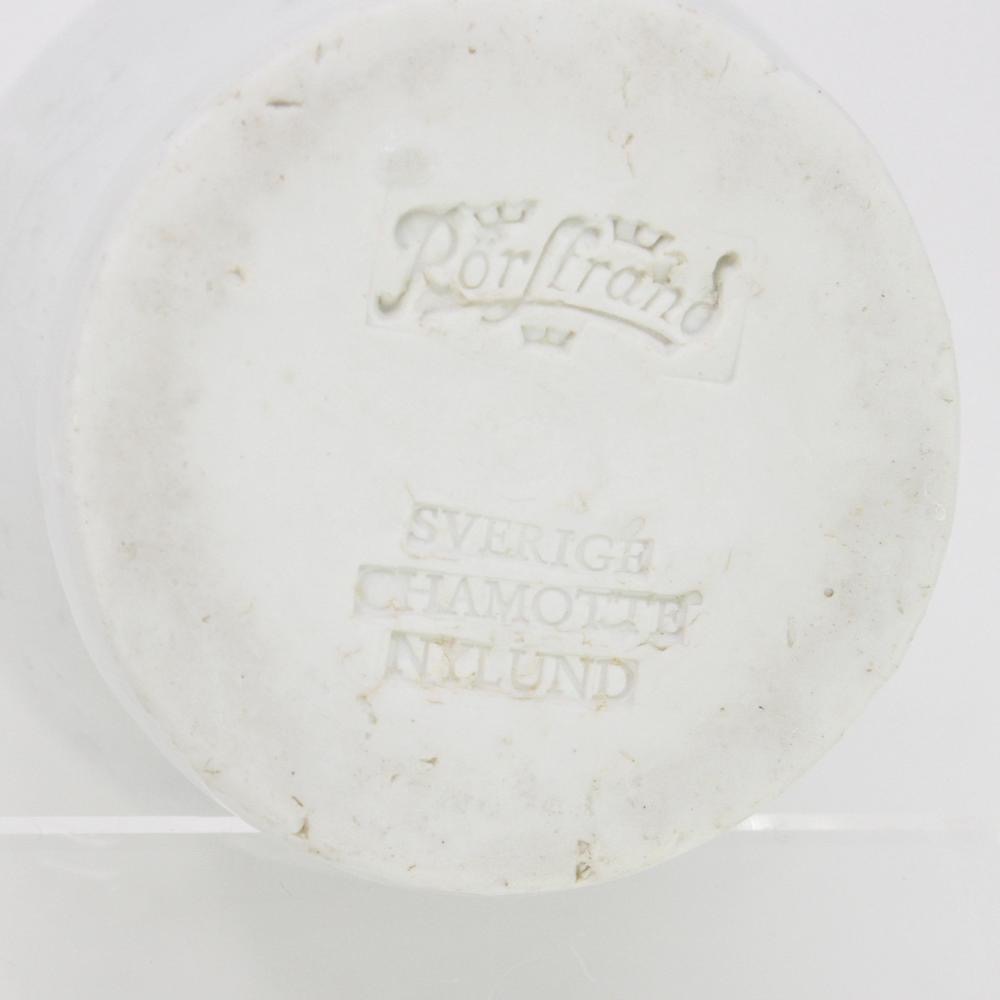 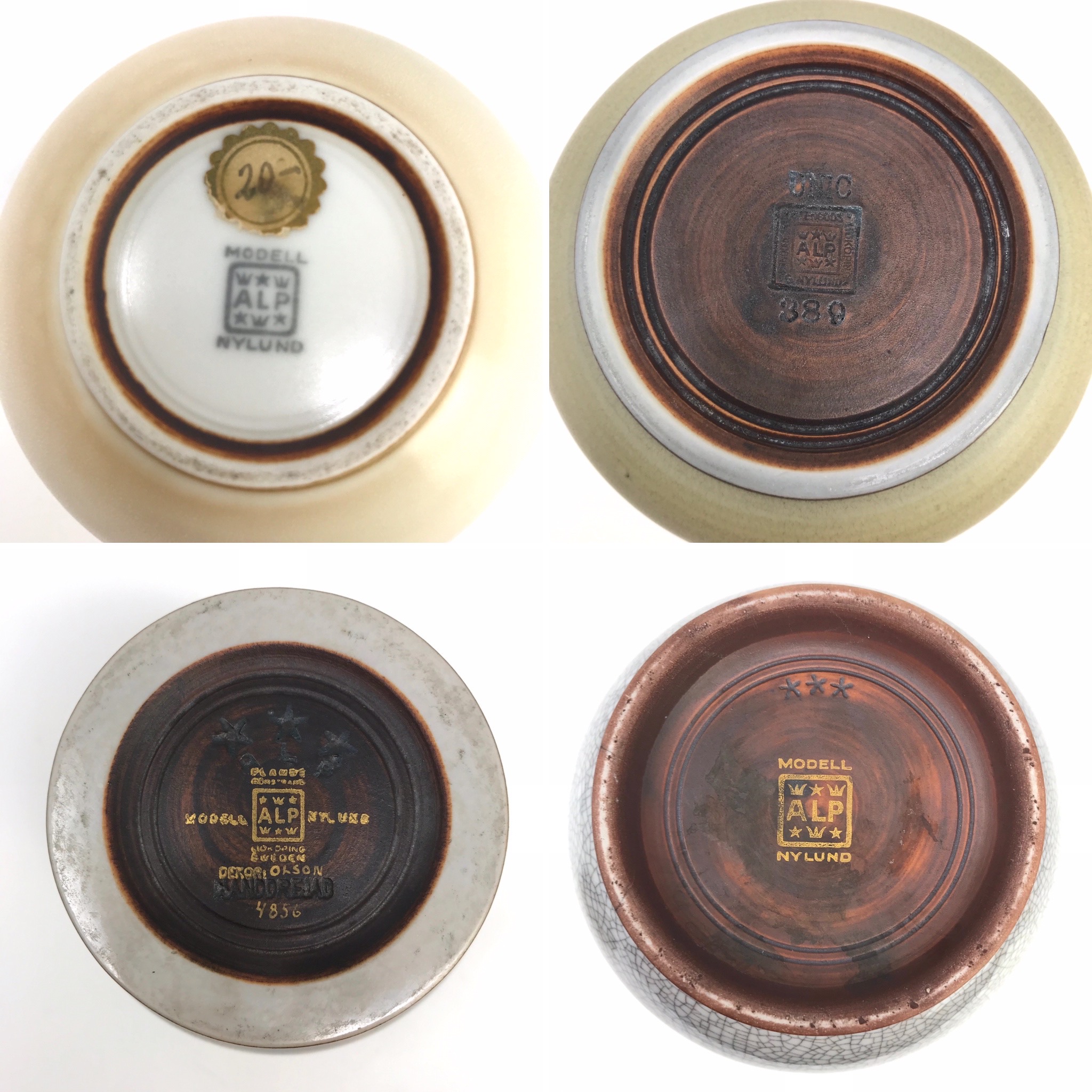 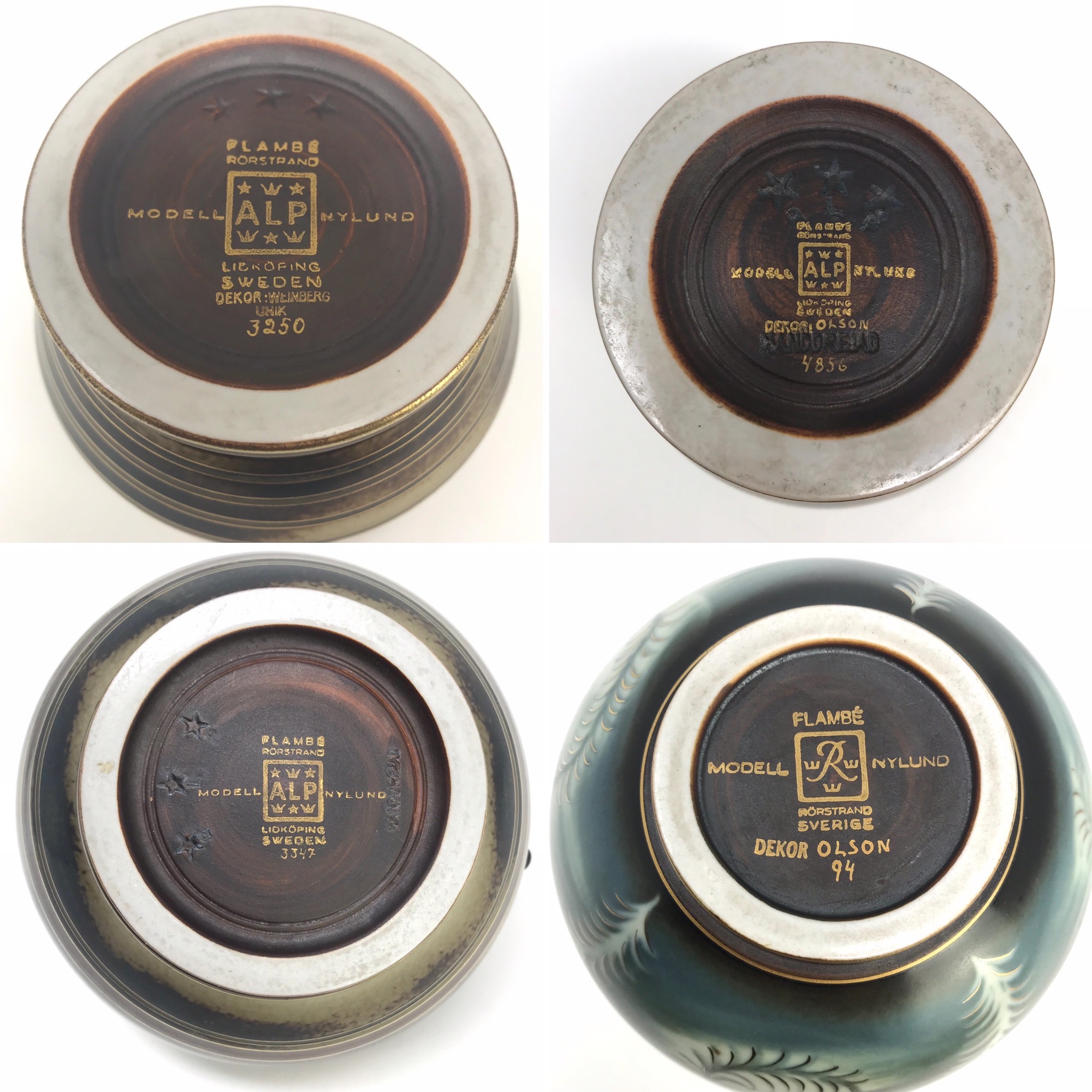 ALP Lidköping/Rörstrand marks late 1930s The former was dropped from the 1940s onwards. 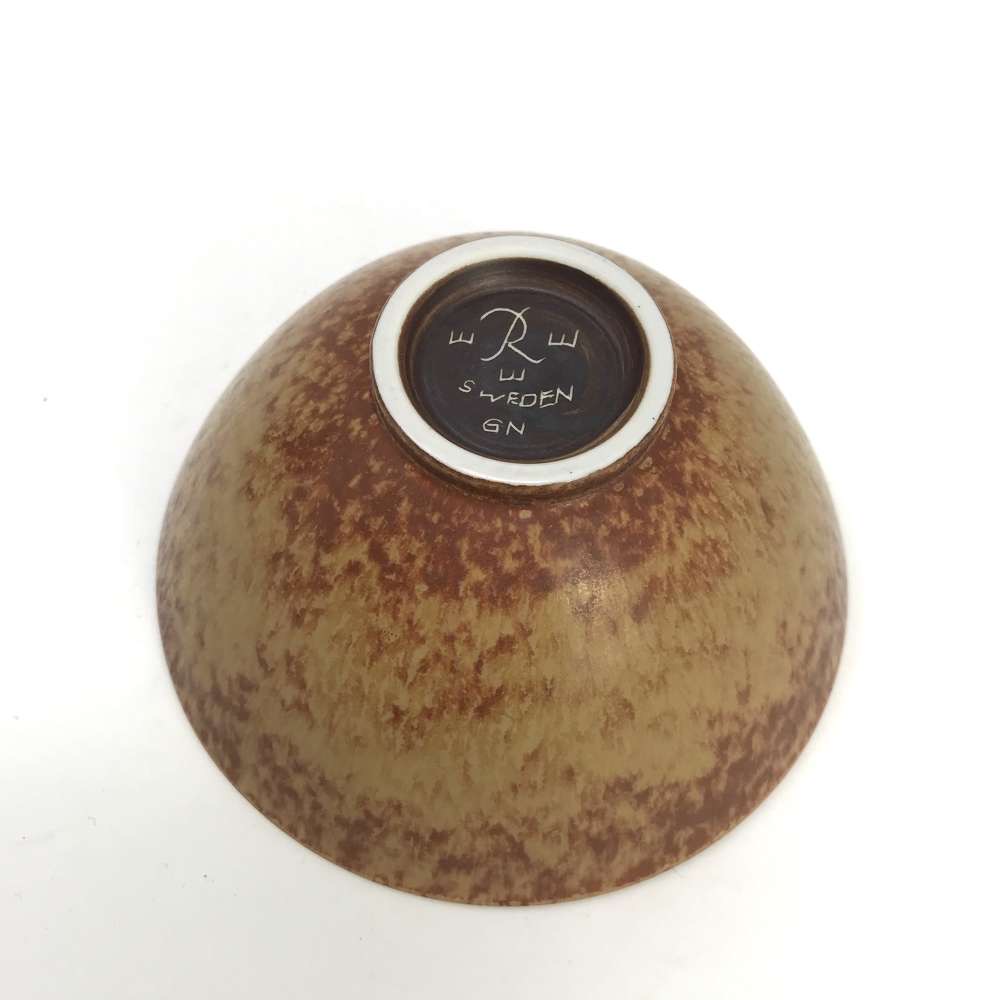 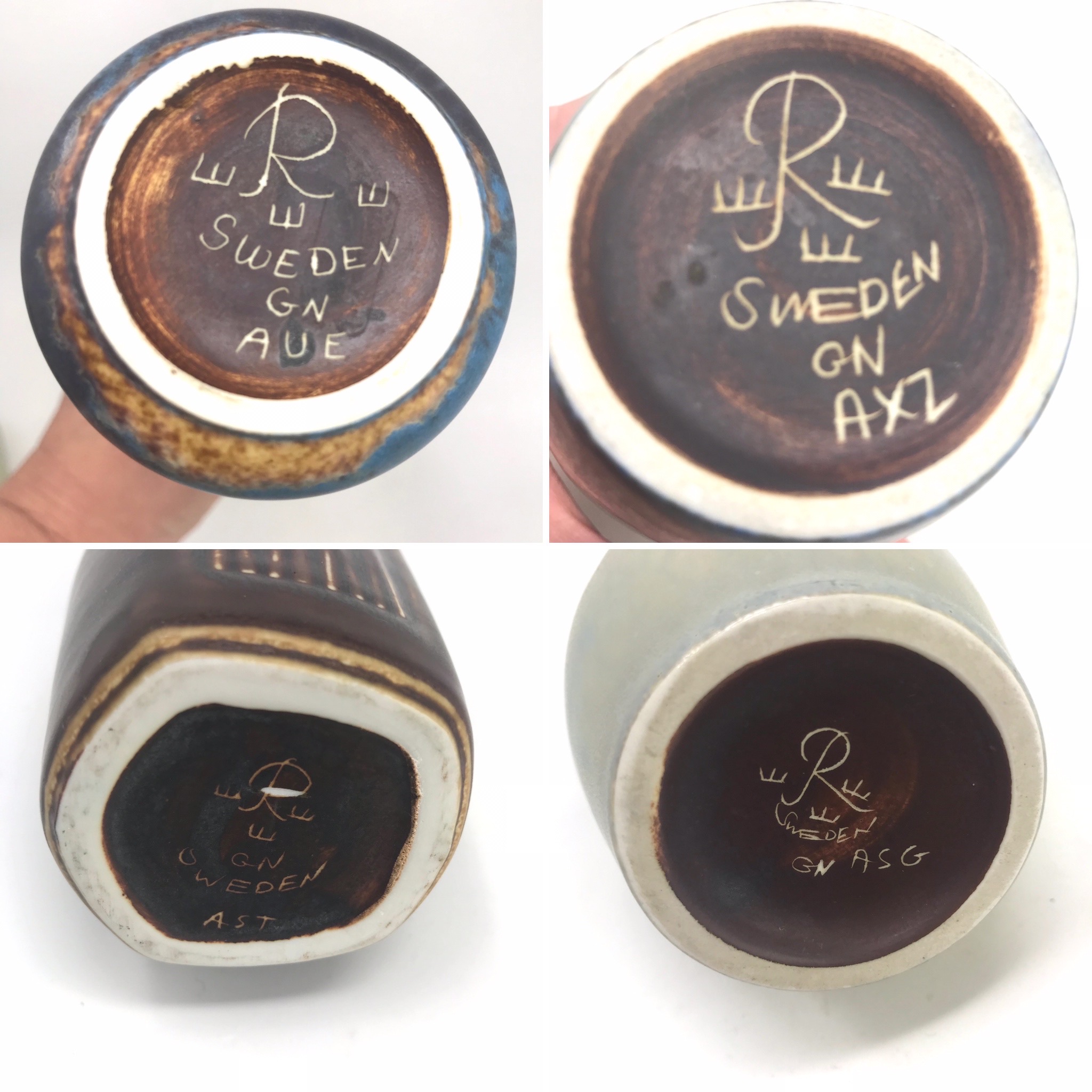 Rörstrand Marks 1950s. The 3 letter code is a model number. The scratched line on bottom left denotes a factory second. 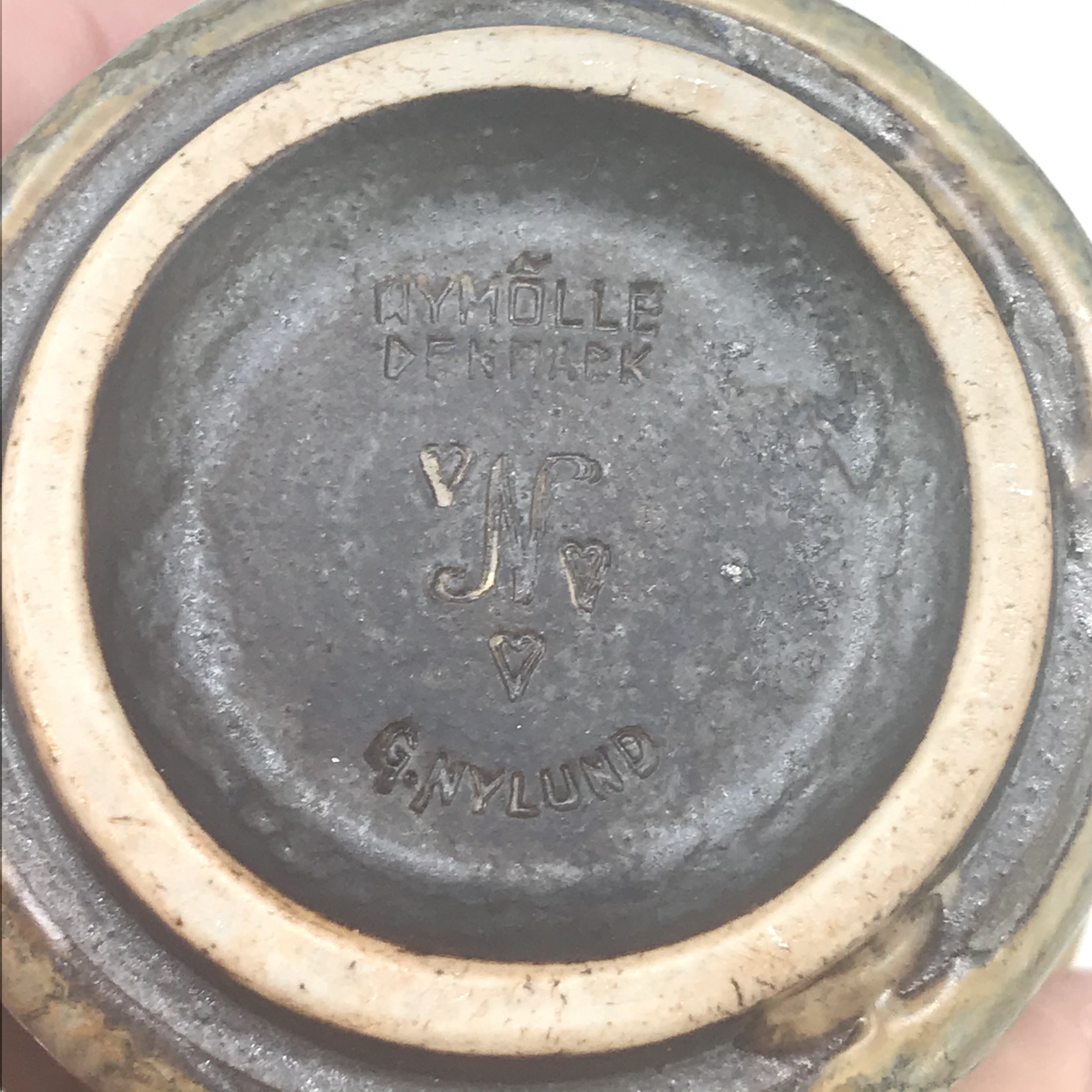 © Haresfur.co.uk please do not reproduce without permission