This month we have listed twelve pieces of glass by Swedish designer Ingeborg Lundin. Here we provide a brief introduction to her work and highlight the pieces of hers that we have. 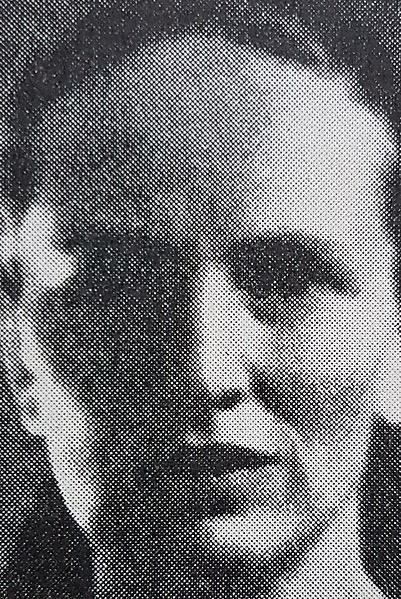 Ingeborg Lundin (1921-92) was a glass designer who worked in Sweden in the post-War years. She studied at the National College of Art Craft and Design in Stockholm. He first and only job was at the Orrefors glass factory that she joined in 1947. Lundin was their first woman designer and joined a team still led by some of the great pre-War designers such as Edvin Ohrstom, Nils Landberg and Sven Palmqvist. She quickly made a name for herself with her distinctive and novel designs in a wide range of types of glass that are quite different to her peers. She produced art-glass objects such as Ariel and Graal pieces, highly accomplished and very distinctive etched glass as well as a wide range of sculptural glass pieces more akin to sculpture. She also produced a number of successful table ware designs. All of her designs have a lightness to them and bring an element of novelty even though the different techniques she was using were well established. 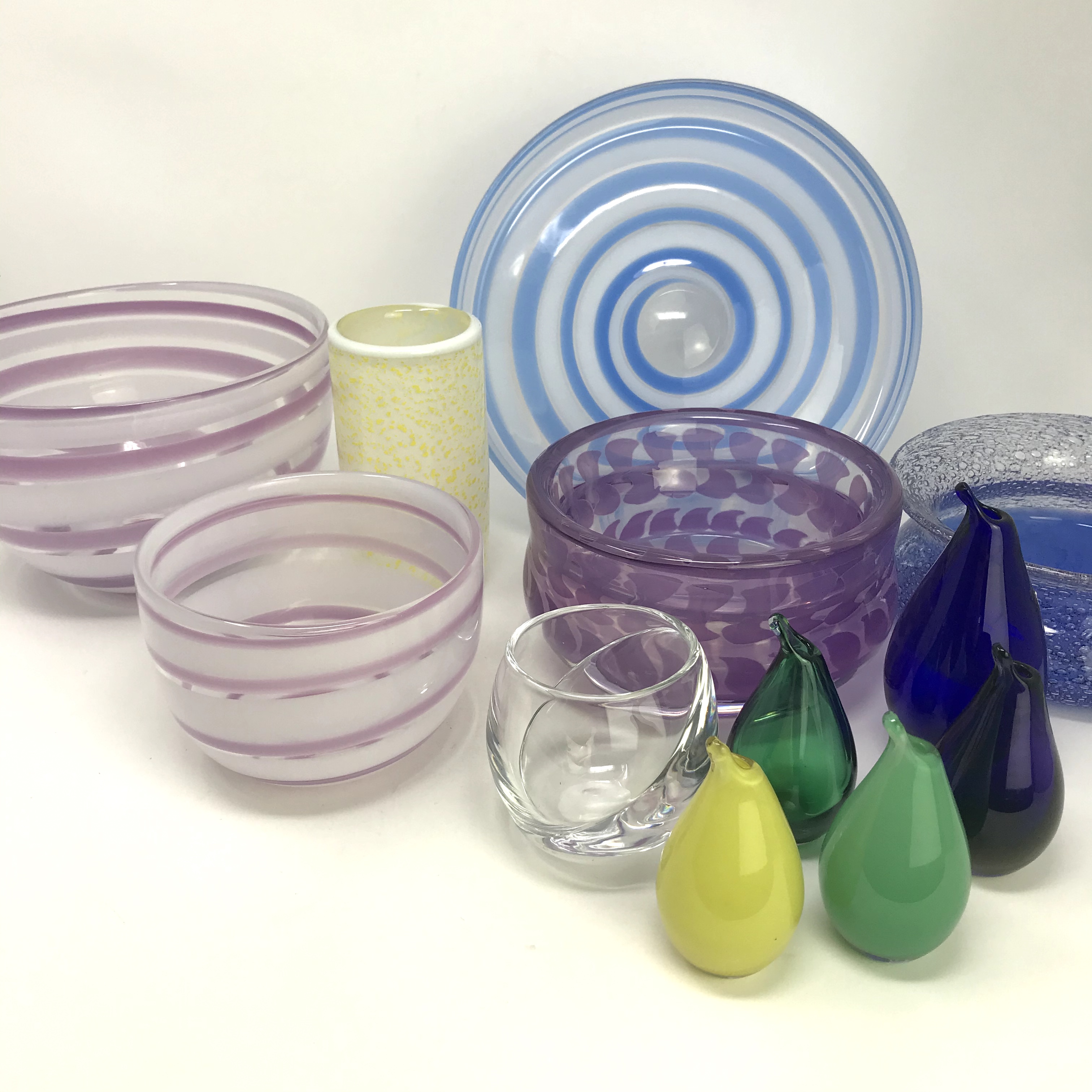 A group of Ingeborg Lundin glass for Orrefors.

Two of her best known designs are the sculptural hour glass vase and in 1955 the 47cm high Applet or Apple vase, which was made in a range of colours. In recognition of her work and her contrubution to glass design she won the prestigious Lunning prize in 1954. This prize ran from 1951-70 and was awarded each year to two up and coming Scandinavian designers.

Her Apple vase is one of the most iconic pieces of Scandinavian glass ever made. It features on the cover of Lesley Jackson's book The New Look: Design in the Fifties. An example was made for the Milan Triennale in 1957 where it was awarded a gold medal which helped to secure her reputation as one of the great glass designers.

She had a reputation for innovation and distnctive designs in her first decade of work. Her etched glass drew influences from Surrealism and was in marked contract to the Classicism typical of that glass medium established at Orrefors before the war. Her designs are often light and playful but exhibit great skill and innovation. She was happy to used both figurative and abstract designs in her work.

Lundin approached the new decade of the 1960s as an established figure in Swedish glass. Her pieces from the 1960s drew influence from the pop art culture of that decade, with a sense of modernity and strong use of bold colours and simple lines.

In 1971 Lundin retired from Orrefors and from glass design though she made a brief return in the early 1990s shortly before her death producing a number of designs for Maleras Glassworks.

During her career she helped to transform the style of glass made at Orrefors after the war. Her engraved glass, glass objects, Graal and Ariel pieces are all amongst the finest pieces of post-War glass design.  Her work is represented in the National Museum in Stockholm, The British Museum, Victoria and Albert Museum, and at many museums worldwide. In many respects her work epitomises the post war Scandinavian design in glass and stands as some the finest glass made during that era. As the years pass her reputation is only set to grow.

Our pieces for sale are illustrated below. These are listed in both our Glass and Women Designers sections with dimensions and prices and are all avaiable for sale. Any that sell will subsequently show in our sold section if you want a closer look. 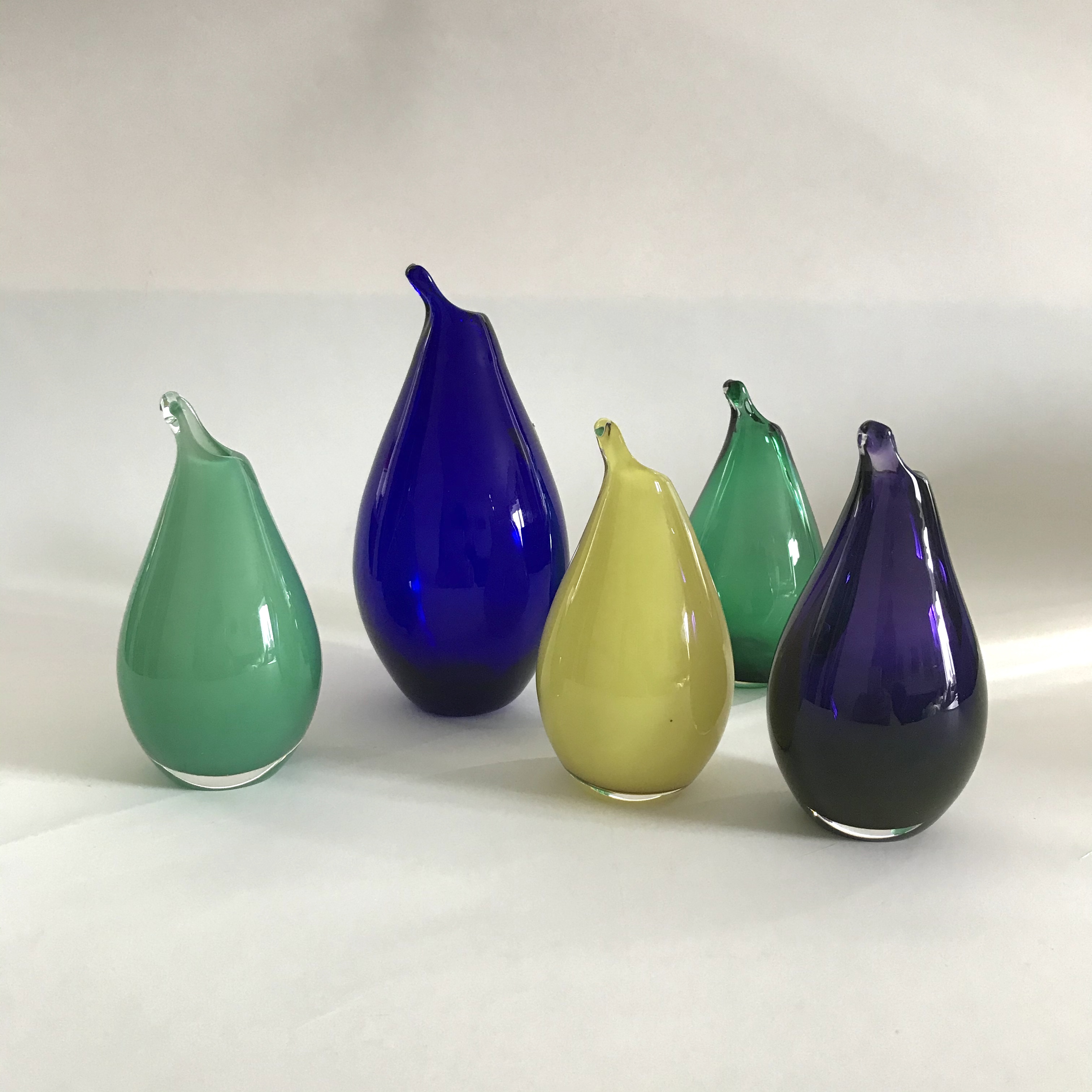 Five beak vases designed by Ingeborg Lundin for Orrefors in the 1950s. Unsigned. 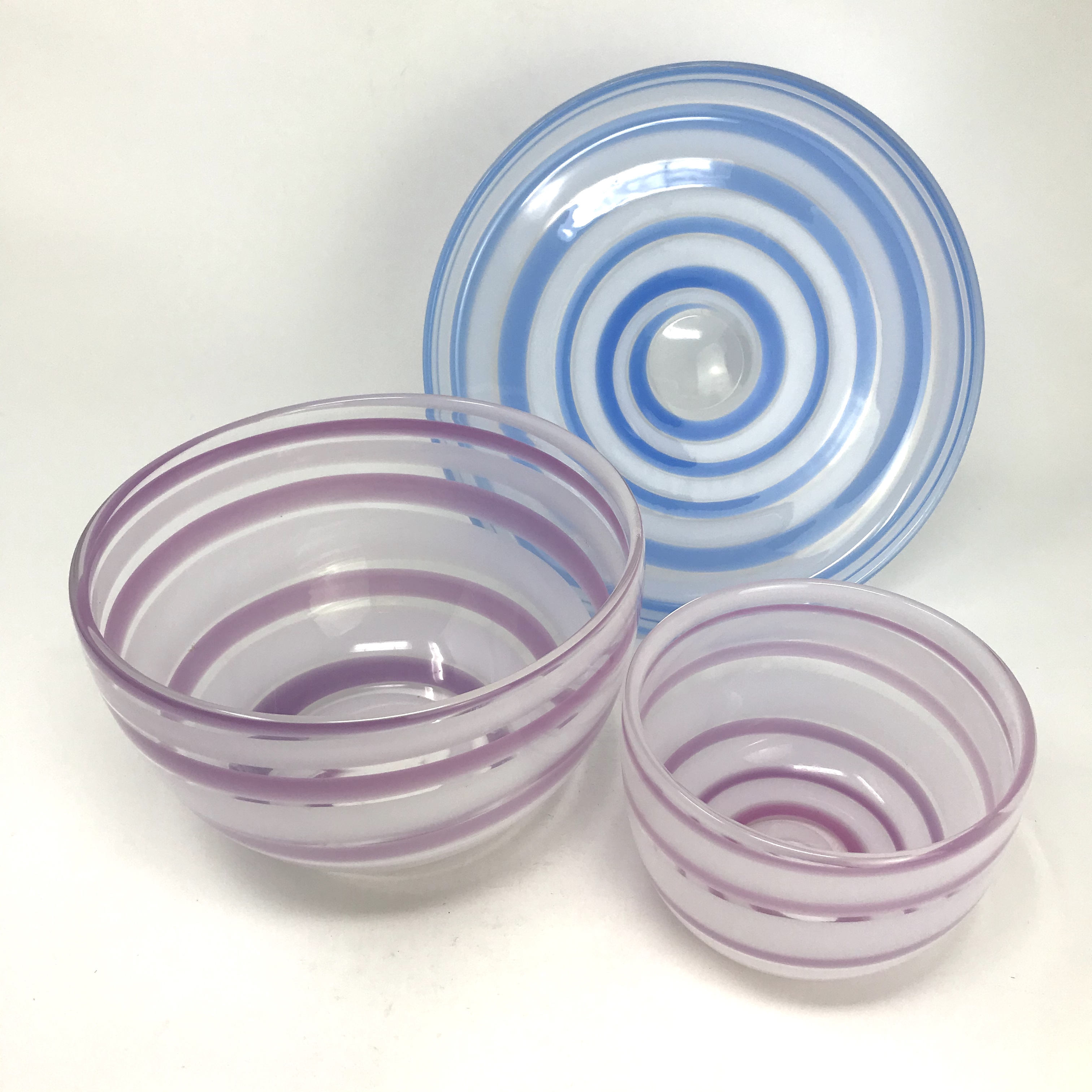 Three glass bowls and dishes by Lundin for Orrefors from the 1960s. The use of bold swirls of colour typifies design in glass in that decade. Signed D. 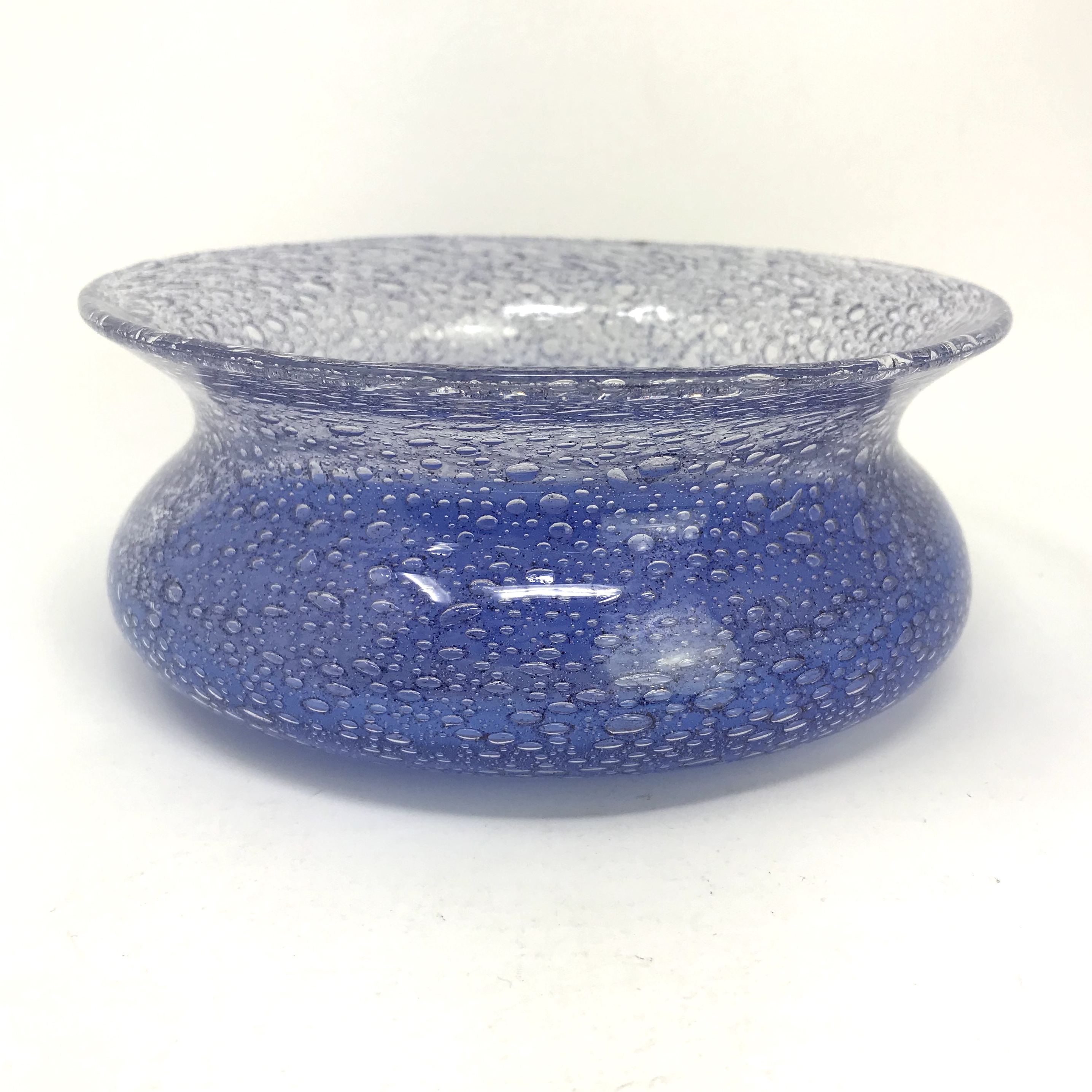 Ingeborg Lundin vase with bubbles for Orrefors. A great creative use of bubbles in the design.

Lundin's work for Orrefors is either signed with a full signature on the important pieces such as Ariel, Graal or exhibition pieces. Others, like this one, are denoted as being by her with the letter D before the model number as in lun"D"in. She wouldn't have been able to use the letter L for "L"undin as that had already been used in the earlier work of Vicke Lindstrand and would have caused confusion. 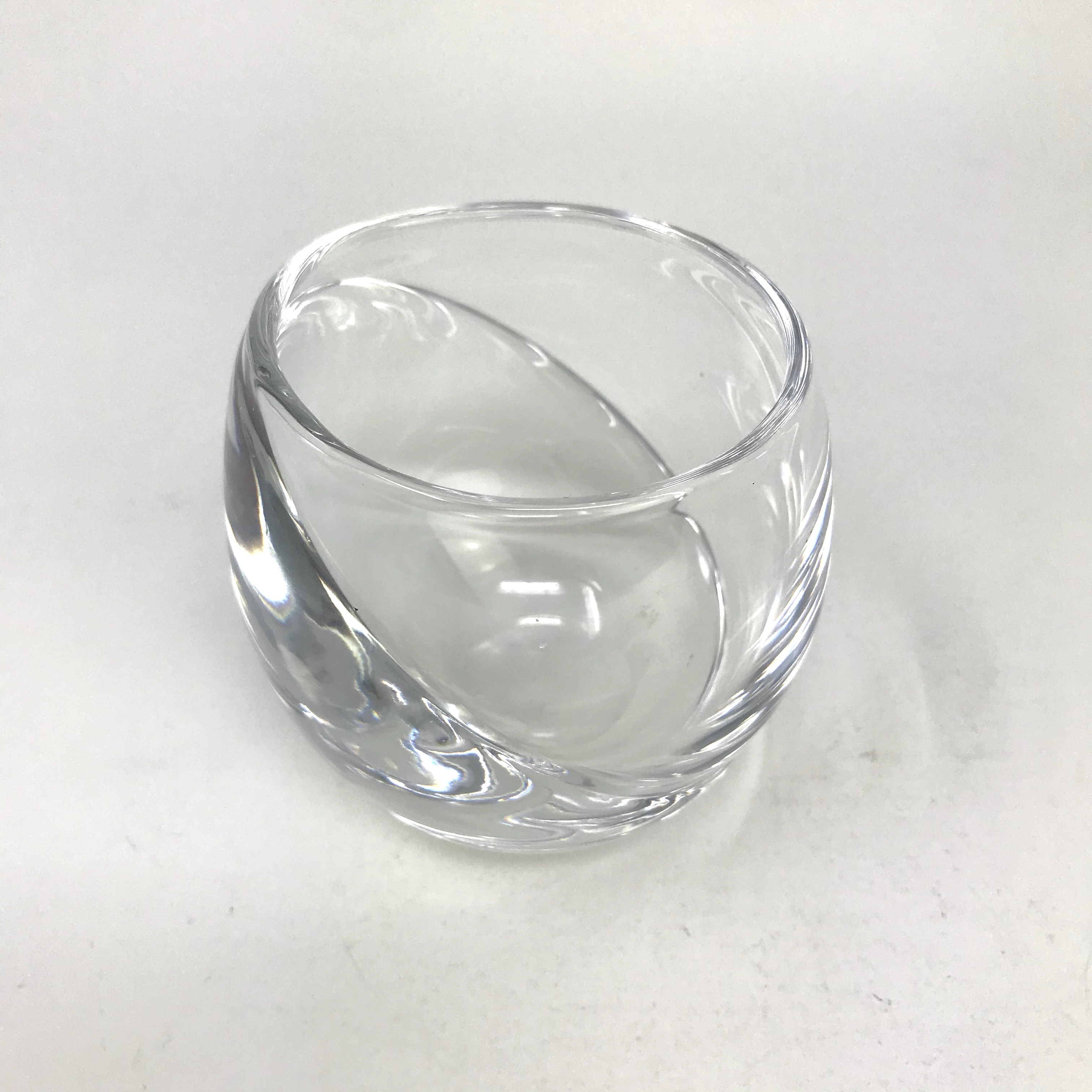 A small bowl by Ingeborg Lundin for Orrefors as part of the eclipse range that was introduced in 1957. The fusion of two pieces of glass gives the illusion of it being partially full of liquid but at an improbable angle! 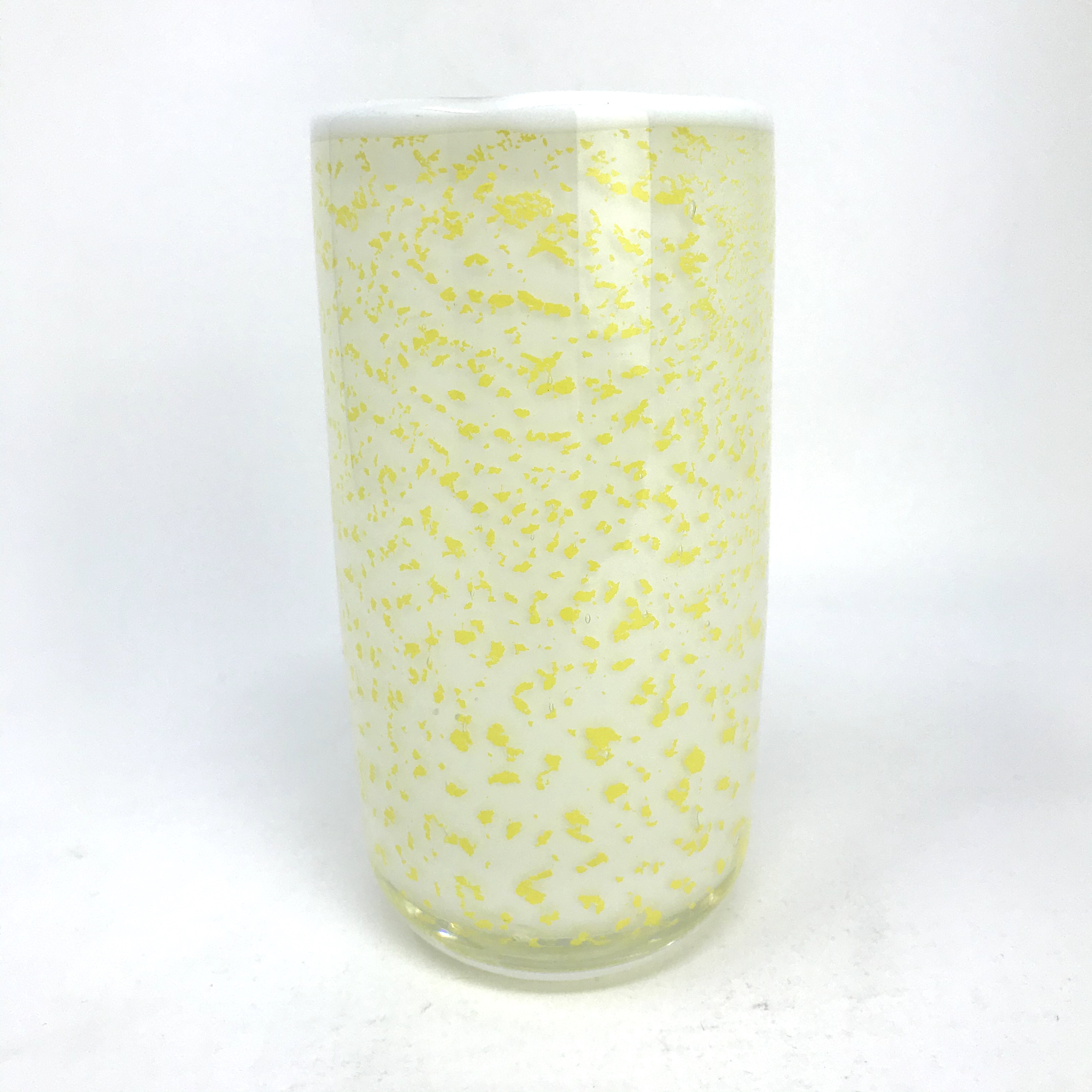 A rare exhibition or "expo" piece by Ingeborg Lundin for Orrefors, signed and dated 1968.

It was common for glass factories such as Orrefors to show a range of new designs by their leading designers at big exhibitions and world fairs each year. Many of these were made in very small numbers as trial pieces or prototypes simply to be shown to the judges, the press and the public who attended. A few really successful designs would subsequently go into production but most never did. Like this one, they are great rarities and are highly sought after by collectors. 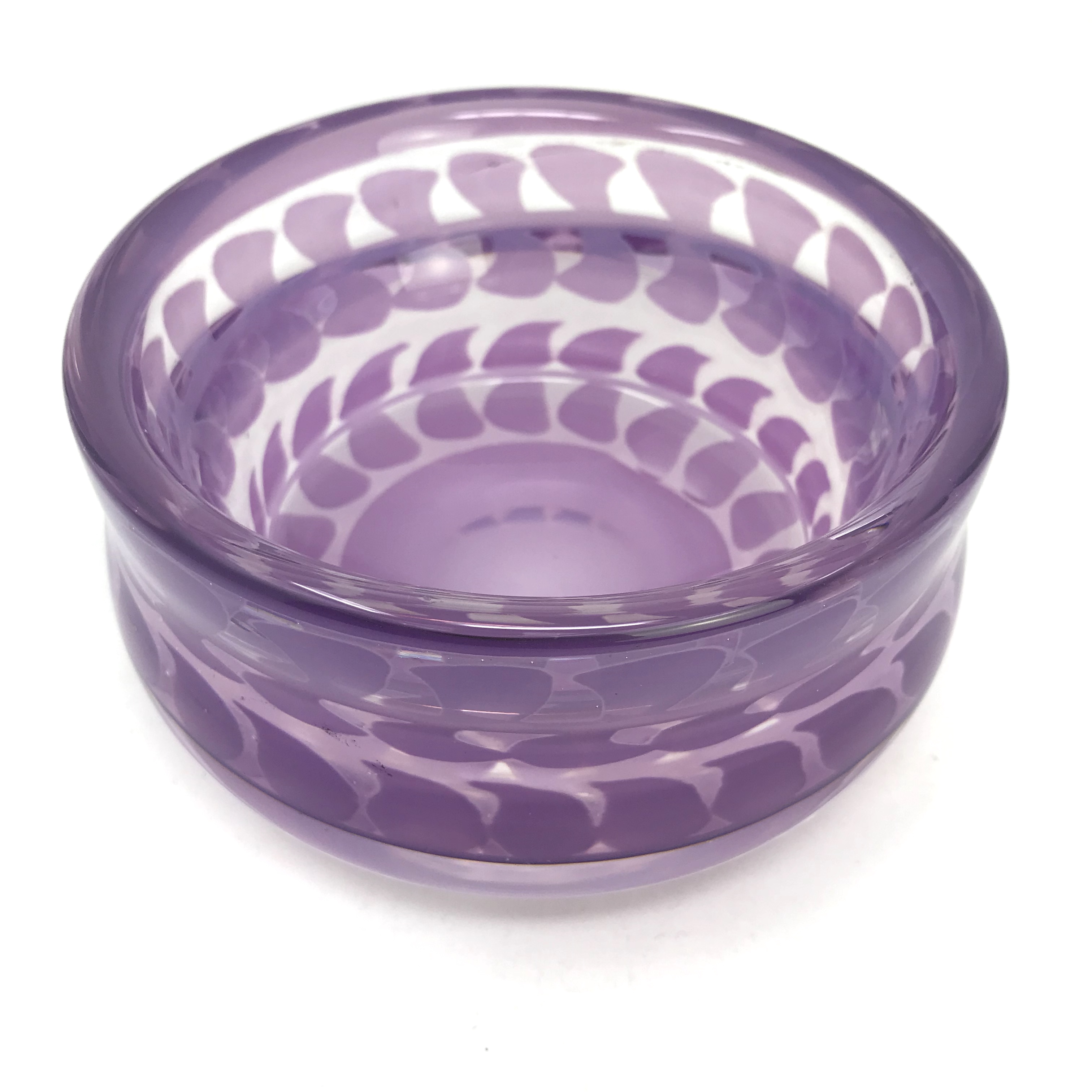 The star piece in our exhibition, a rare Graal bowl by Ingeborg Lundin for Orrefors, signed and dated 1967.

(C) Haresfur.co.uk please do not reprint without permission.