We have just updated our website with new stock items for December. Starting with jewellery, we recently acquired a small collection of silver and bronze jewellery from Finland. This includes pieces by the designers Pentti Sarpaneva, Hannu Ikonen and Jorma Laine. We also have pieces from the Kultaseppa Salovaara and Kalevala Koru studios. Away from Finland there are brooches from Georg Jensen and Niels Erik From in Denmark and a Swedish bronze bangle from SSA. There are some very affordable pieces here that would make great Christmas presents. 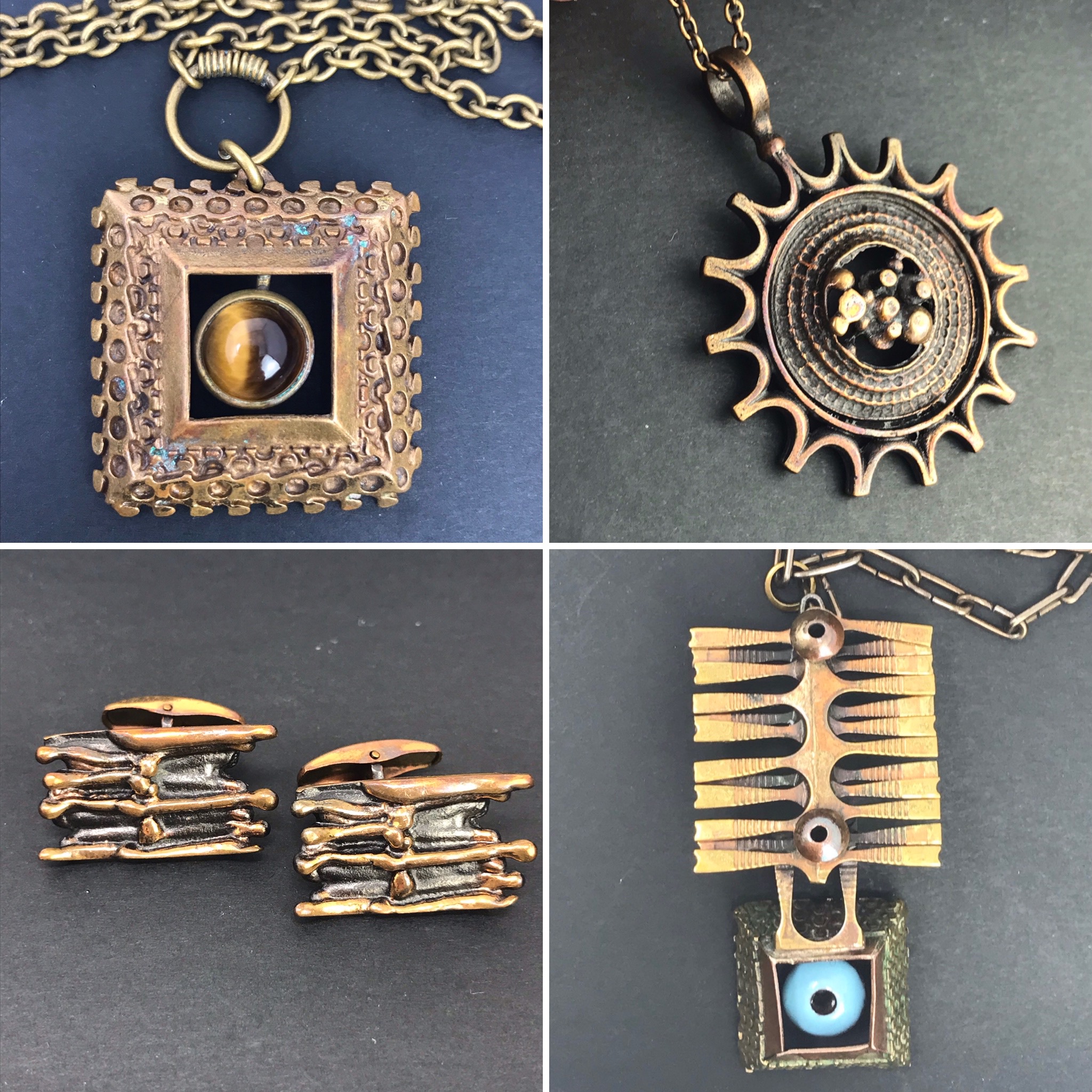 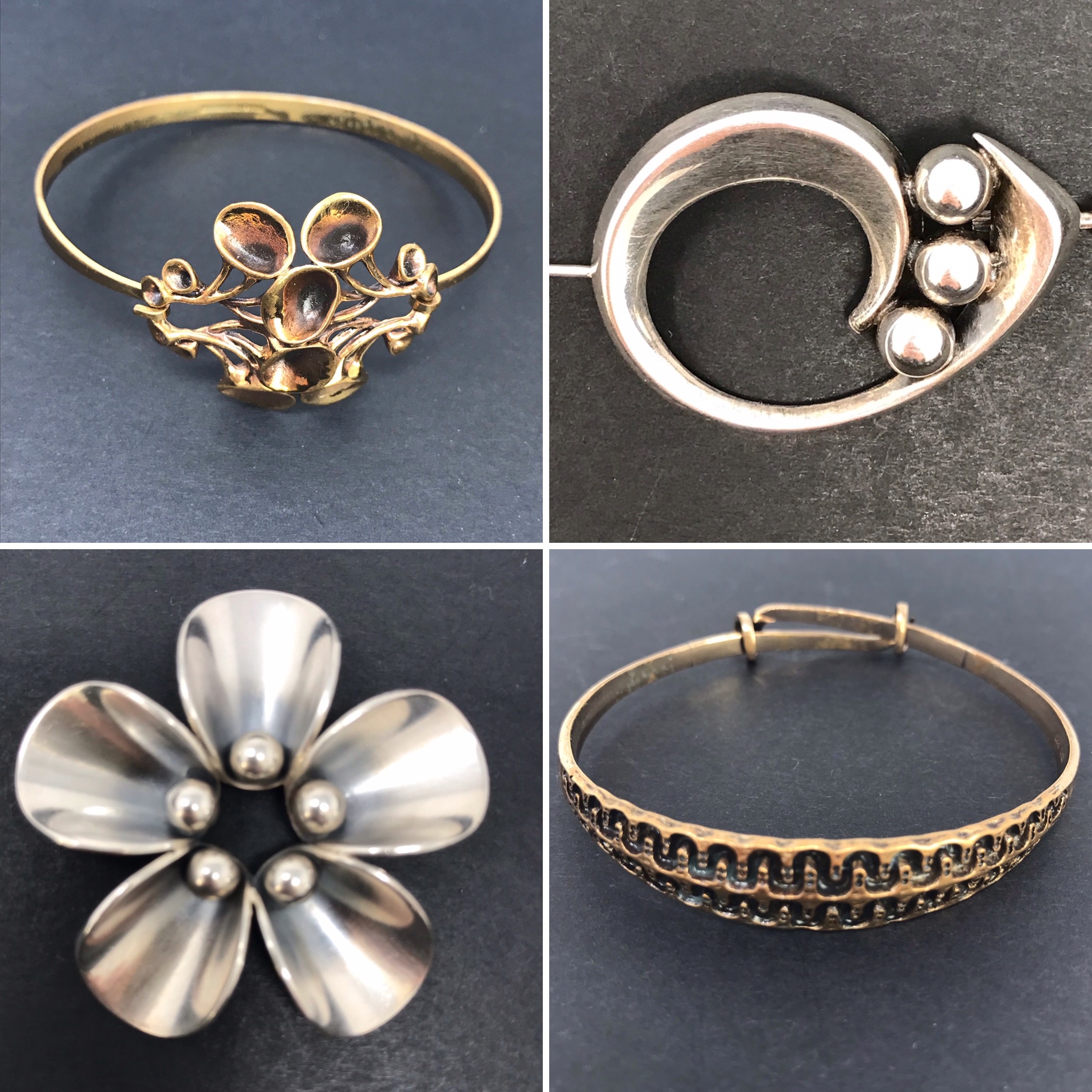 Our selection of textiles includes our first clothing item, a women’s cotton opera coat in large size, designed by Cressida Bell c1984. Bell has strong connections to the Bloomsbury Group from earlier in the Twentieth Century as her grandmother was the leading Bloomsbury artist Vanessa Bell and her great aunt was the novelist Virginia Wolff. She continues as a designer today based in London and takes inspiration from these family connections. We also have a beautiful addition to our selection of Swedish rya rugs with one called Glöd designed by Birgitta Salenus for NIAB in the 1960s. There are also two hand-made wall tapestries showing forest scenes by the Finnish artist Pekka Saukko. 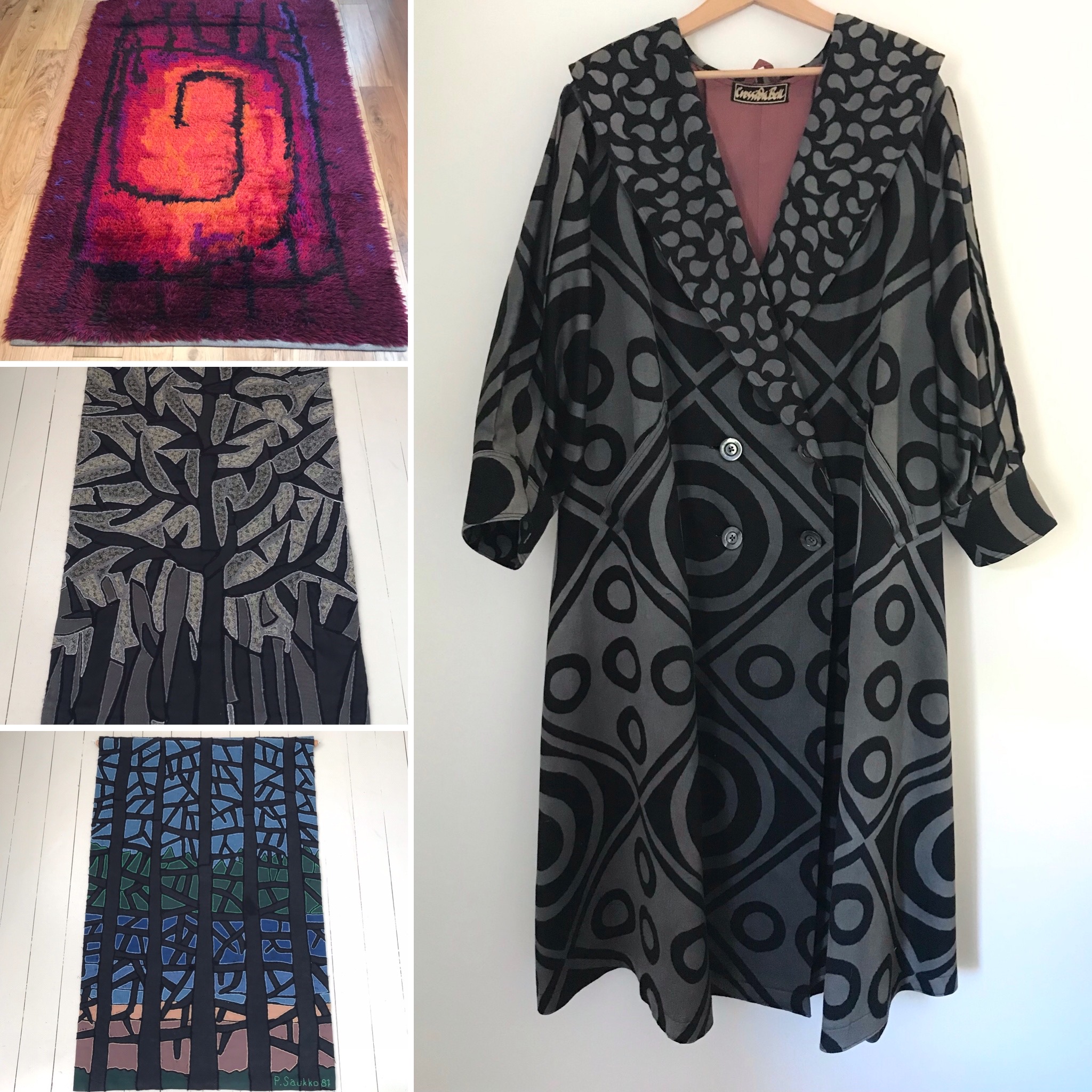 In art we have an oil painting of a coastal landscape by the British artist Nommie Durell from c1950 which we think shows the influence of Graham Sutherland in its style. There is also a small surrealist beach scene in tempera on board by the Swedish artist Eric Cederberg, several of whose works we have sold before. This one is dated to 1969. There is also a rare poster designed by leading British artist John Piper for the Tate Gallery from 1979. 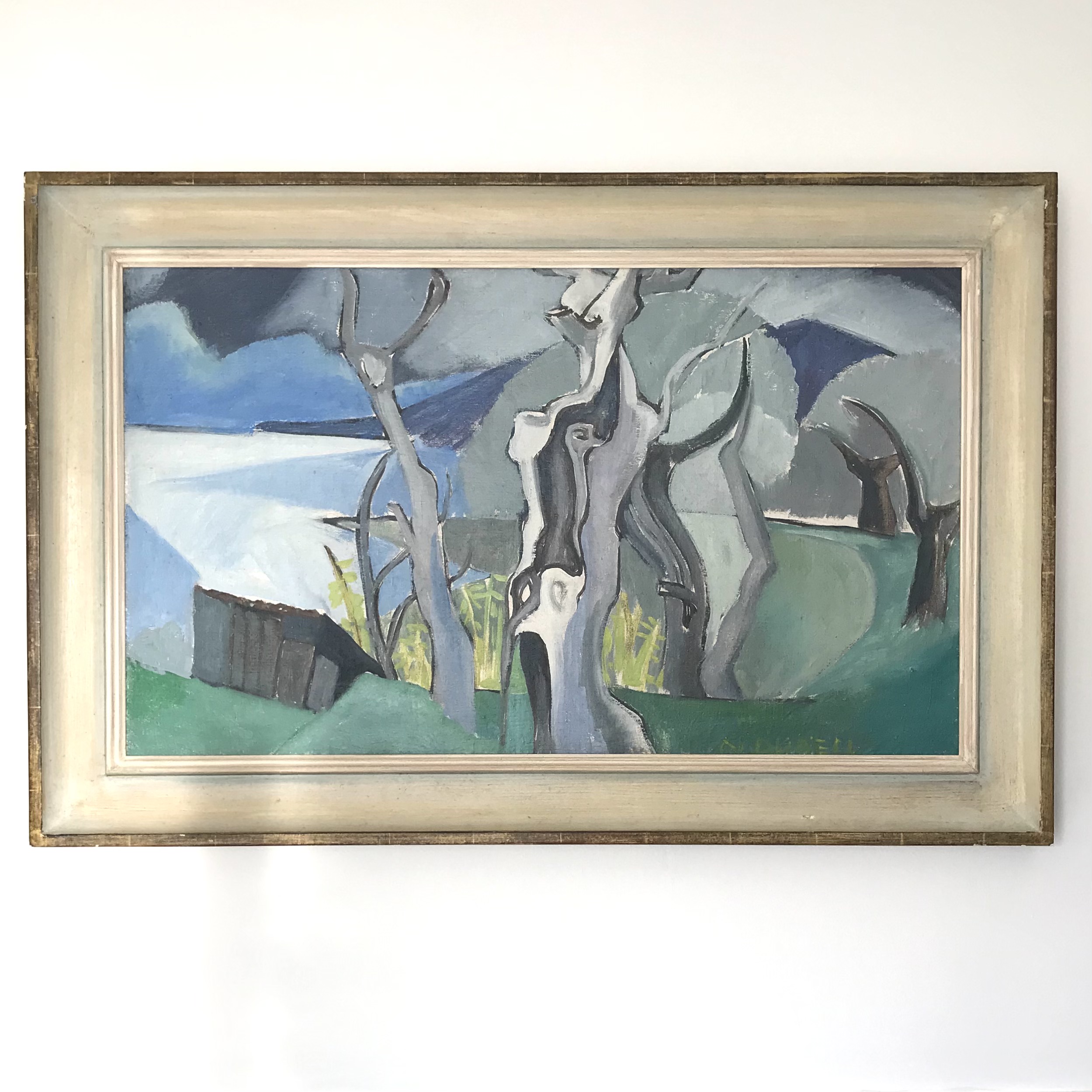 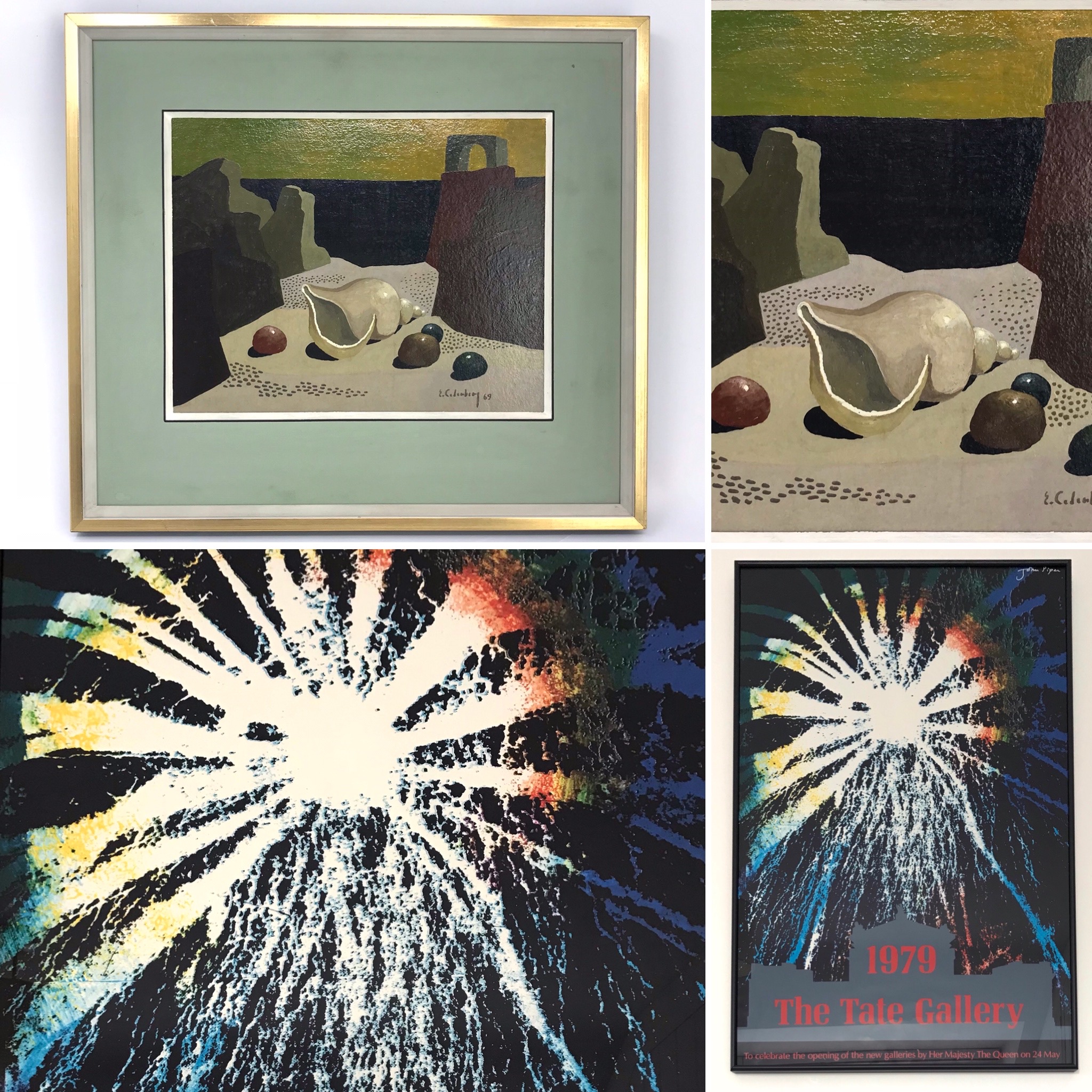 Our ceramics selection includes one of our most important additions to the website this year, a small stoneware budding bowl by world famous ceramicist Axel Salto for Royal Copenhagen. Axel Salto (1889-1961) is without doubt the most important figure in Danish ceramics whose work in that medium is now recognised as amongst the most significant and influential made during the Twentieth Century. He started out as an artist and was influential in early debates on modernist art in Denmark in the 1910s after meeting Picasso and Matisse in Paris. He turned to ceramics in the mid-1920s and produced some highly acclaimed pieces for Bing and Grøndahl for the Paris World Fair of 1925. He went on to produce some extraordinary pieces with novel shapes and glazes with Carl Halier, then at Saxbo and finally at Royal Copenhagen studios. He produced ceramics in three organic shapes: budding, fluted and sprouting. These were richly glazed with solfatara, sung, celadon or olivin glazes.  He is now recognised as one of the great modernists of the last century. His work now appears in top salerooms and is held in the most important museum collections worldwide. 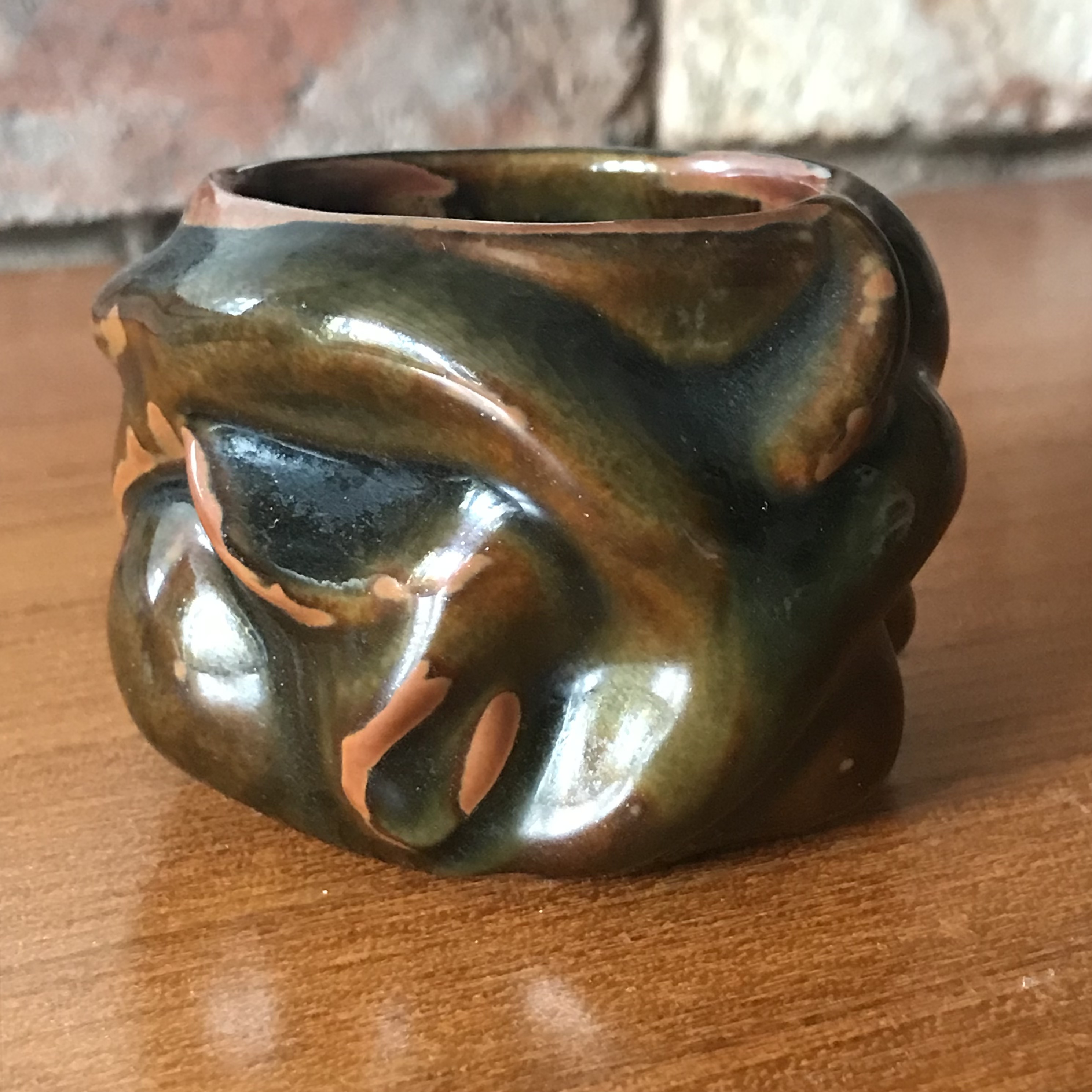 Other ceramics from the Nordic countries this month focus on three pieces by Gunnar Nylund for Rörstrand and a large Chamotte vase by Per Linnemann-Schmidt for Palshus, Denmark from the 1960s. We also have four little spoon rests with the Hans Christian Andersen patterns on them by Bjorn Wiinblad for Nymølle, Denmark. 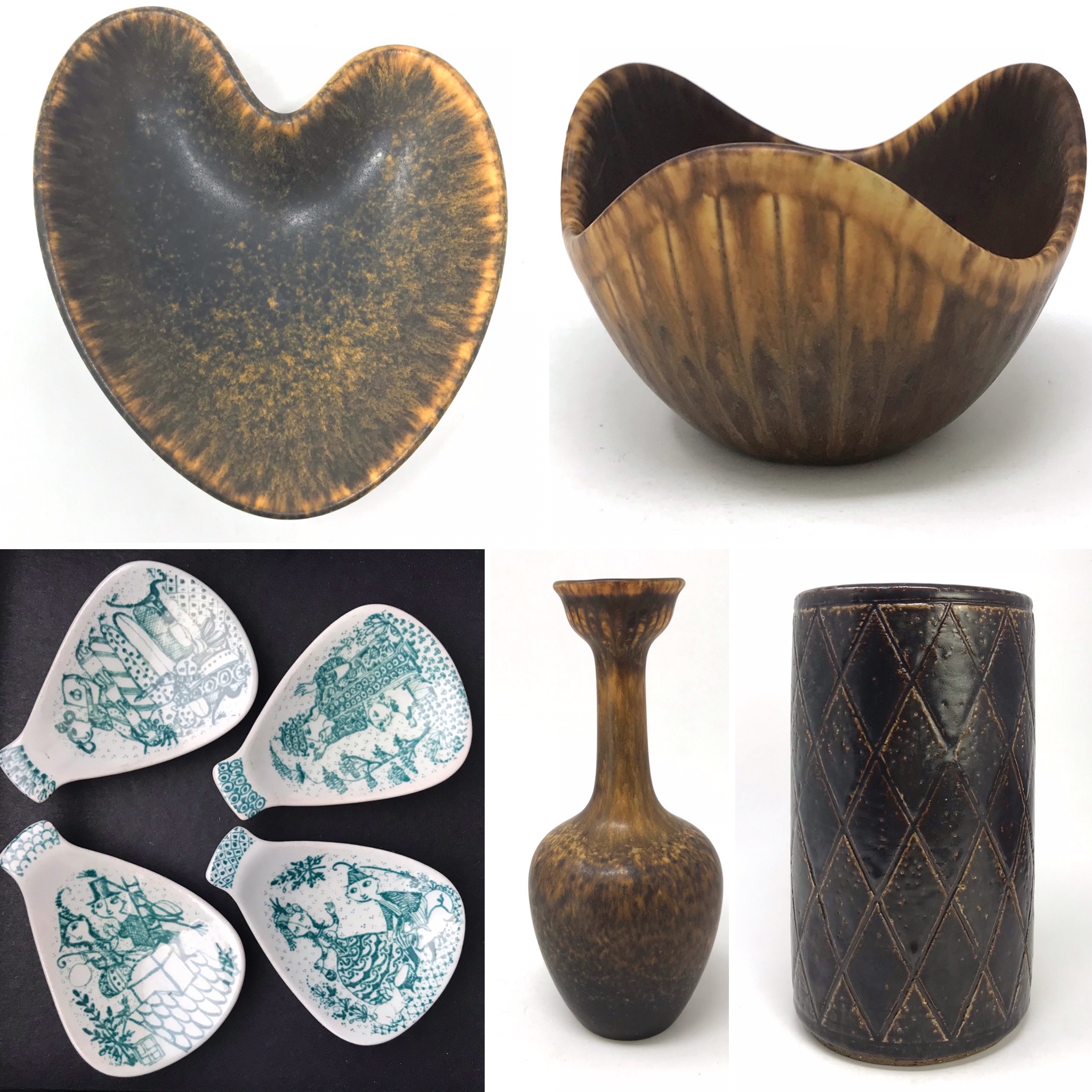 We also have three German studio ceramics to add to our international ceramics selection. These all focus on beautiful glazing techniques and include a jug by Wendelin Stahl and two vases by Margarete Schott. 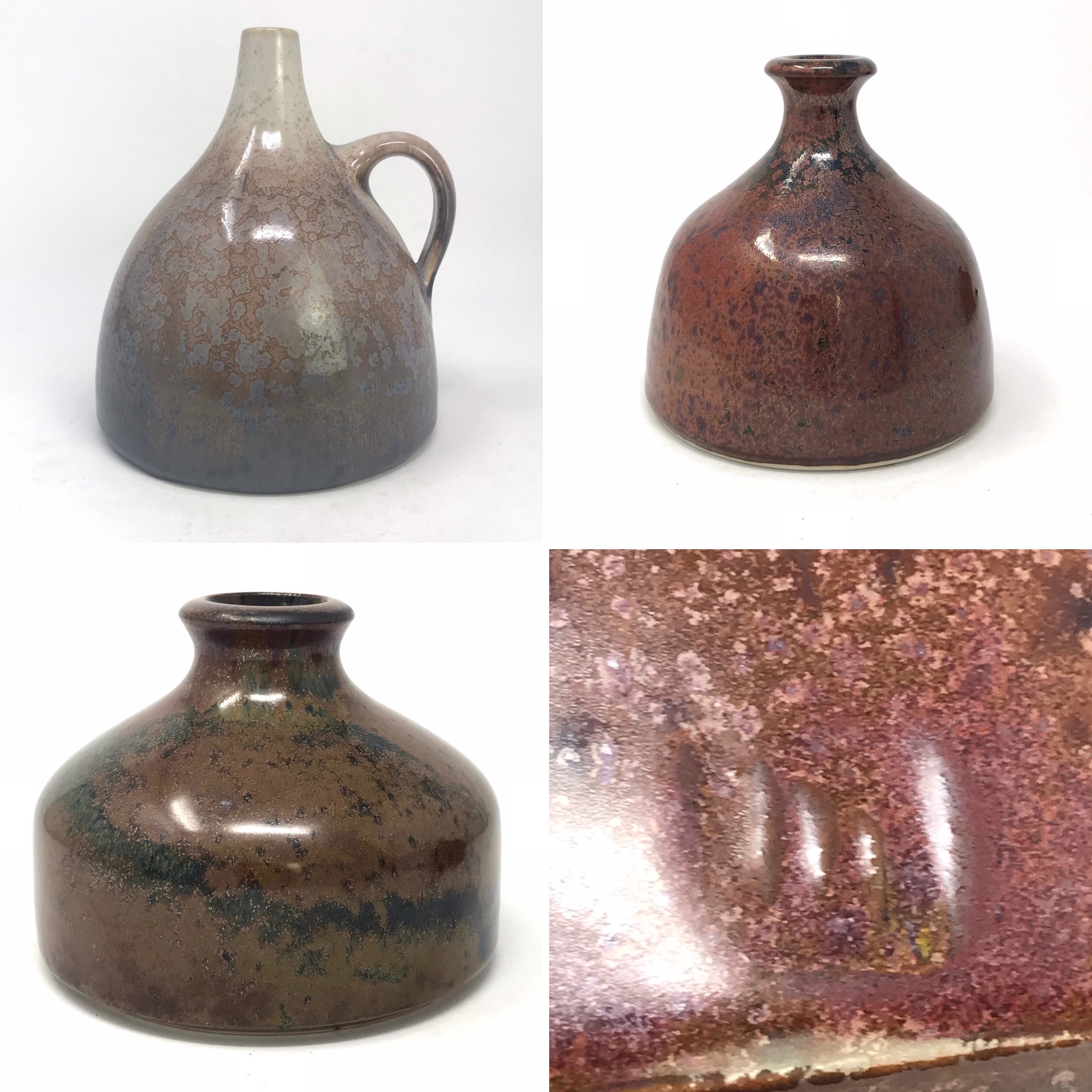 In glass, we include two more pieces from the Orrefors Gallery series from the 1980s by Olle Alberius. These are two tall vases in blue and yellow that we are selling together. There is also an amber Sputnik bowl by Lars Hellsten for Orrefors and a late footed bowl for Strömbershyttan by Erik Höglund. There is also a swirl pattern bowl by Vicke Lindtrand for Kosta from the 1960s. This is a larger version of one already listed on our website. 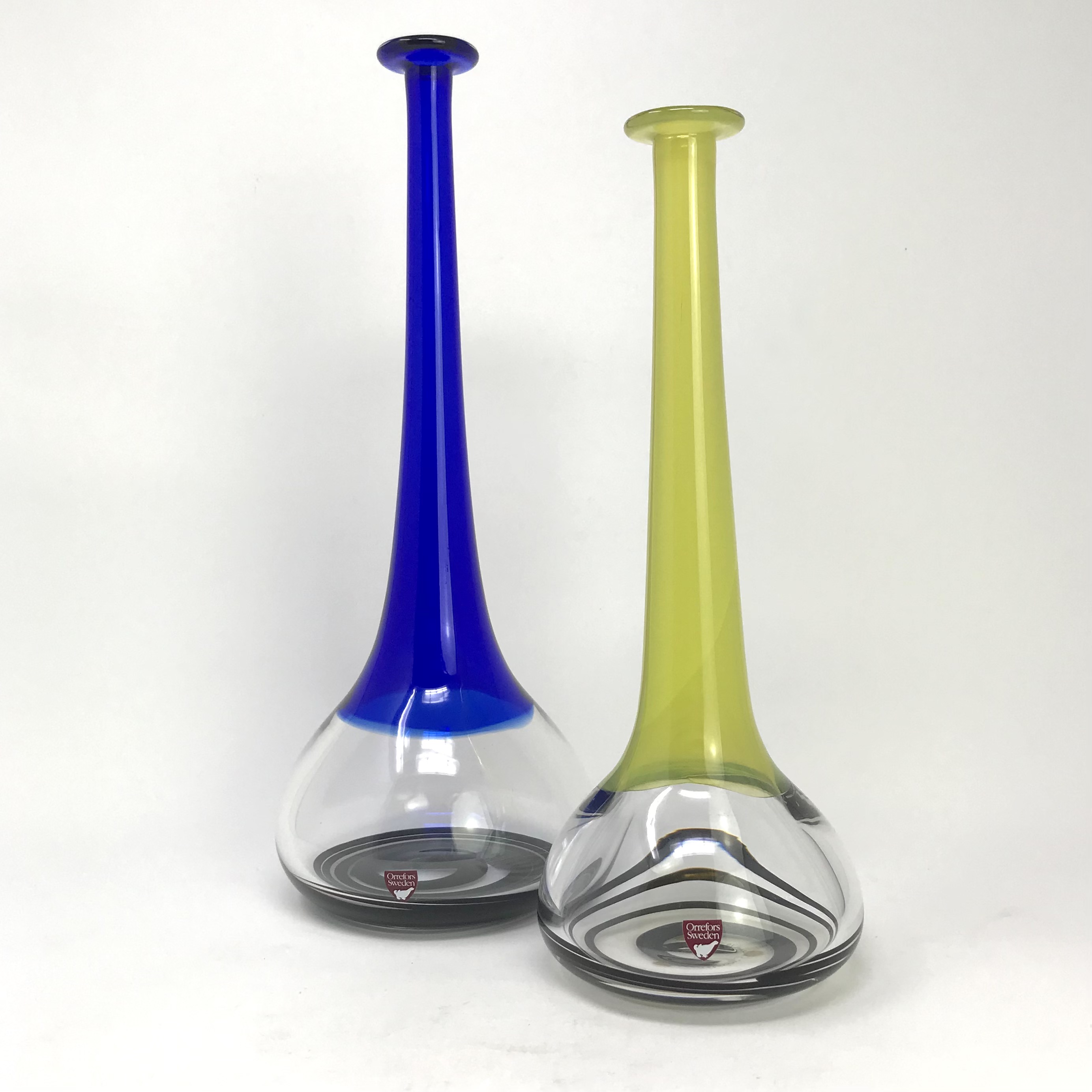 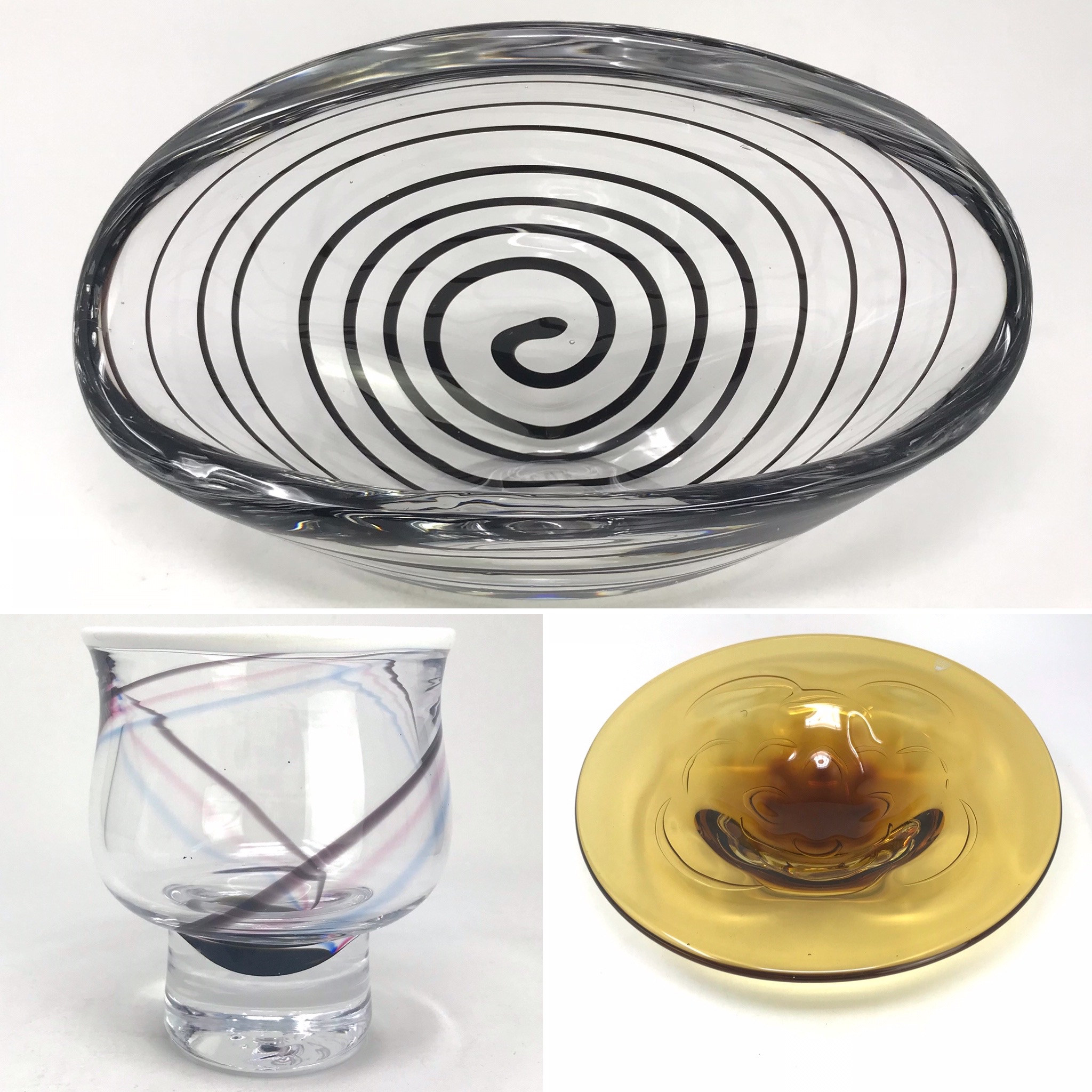 Our final piece this month is a large, hammered, shallow copper fruit bowl in the Amsterdam School style by Karl J Gellings from c1930. Gellings ran a metal work studio in Rotterdam and also designed some notable Art-Deco ceramics. He also had strong connections to the Dutch De Stijl art movement as his workshop produced a large number of metal fittings for the Architect J. J. P. Oud, co-founder of the De Stijl movement with Theo van Doesberg. 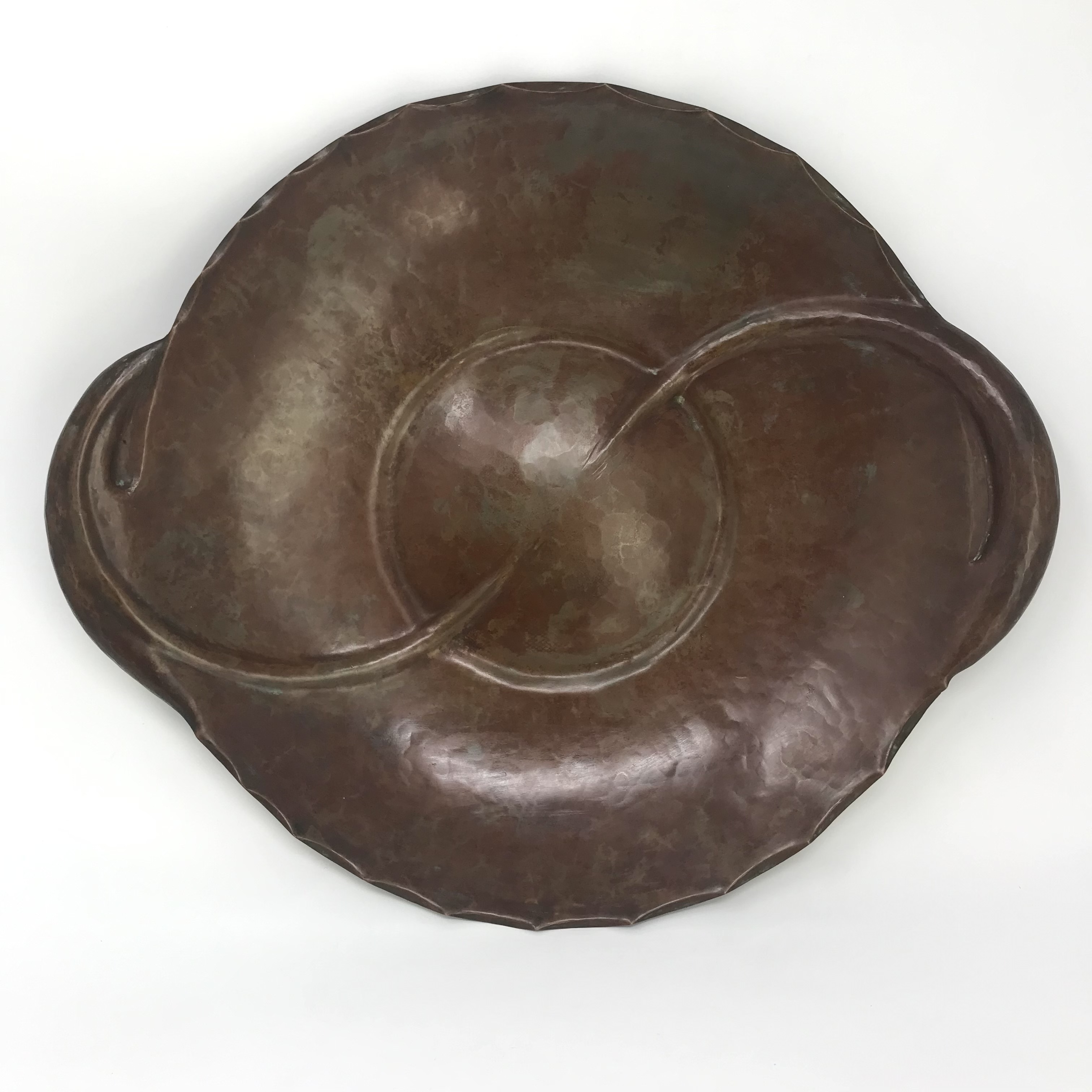