For our new stock for November we begin with two very special rya rugs. We were featured in an article on Swedish rya rugs in the August issue of Homes and Antiques and it is something we plan to sell more of in future as we’ve seen a growing interest in this style of vintage long pile rug. We start with two rugs by arguably the greatest designer of the Swedish rya style.

Marianne Richter (1916-2010) worked for the Märta Måås Fjetteström studio alongside her mentor, Barbro Nilsson, from the 1940s designing some of the finest hand woven rugs ever made. She also designed a 200 square metre tapestry that hung in the United Nations building in New York from 1952-68. This was sadly destroyed by the combined effects of use of an untested fire retardant chemical and sunlight in the late 1960s and only a few scraps of it remain. It is now regarded as one of the great lost modernist works of the Twentieth Century. She also took on commissions with other textile companies to produce machine woven rugs that could be accessible to a wider public. Leading amongst these was AB Wahlbecks who produced about 22 of her designs for Rya rugs from 1955-72. Both of our rugs come from the designs she did for them. 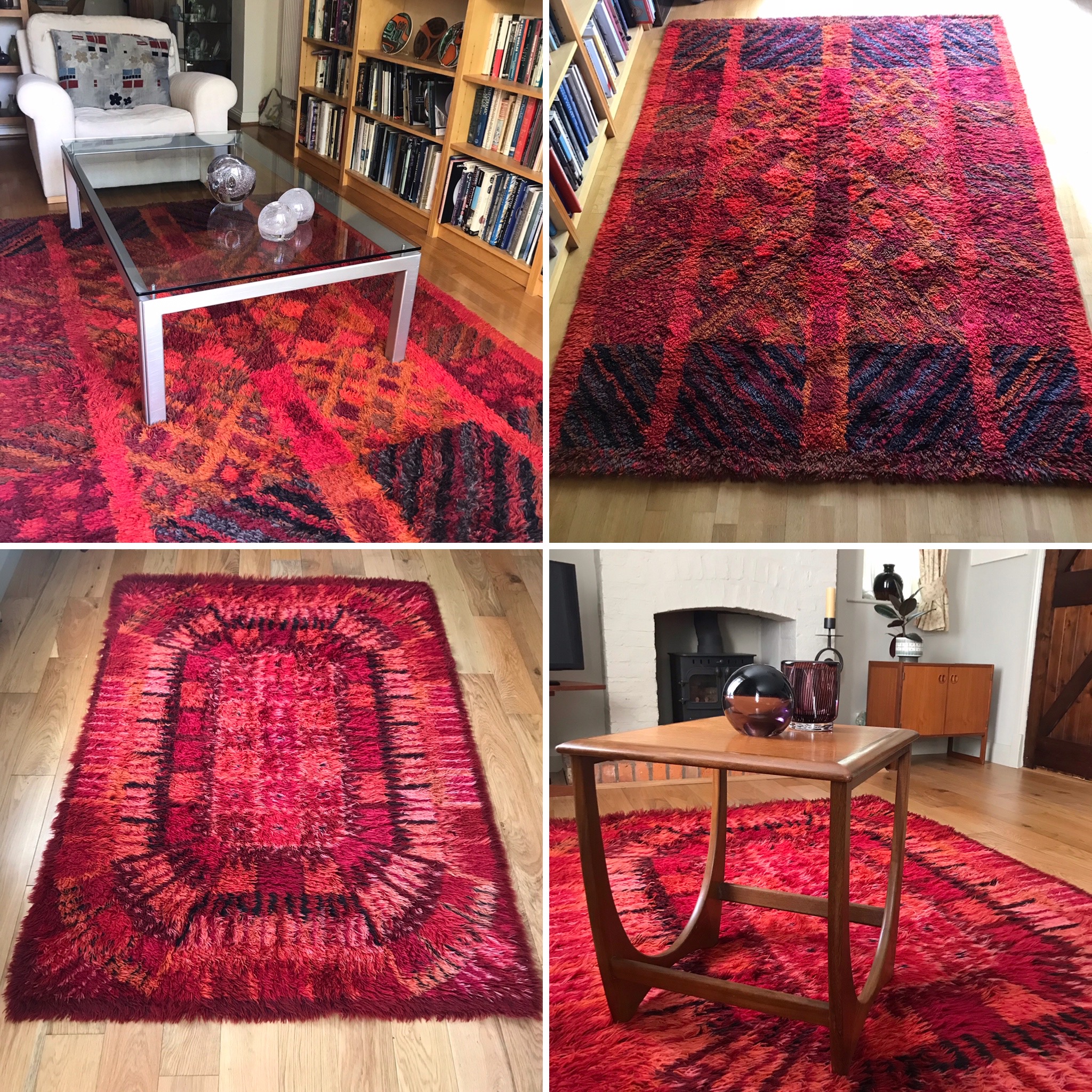 In art, we are delighted to be able to offer two important works by noted modernist artists. The first of these is a gouache by American artist George L. K. Morris. Morris (1905-75) was a significant figure in the history of Twentieth Century American art. Born into a wealthy and prominent East Coast family he graduated from Yale before going on to study art in New York. From there he travelled to Paris in 1929 where he studied with Fernand Léger. While in Paris he became friends with the important abstract artist Jean Hélion and was influenced by his work. On returning to the US he developed his own style of hard-edged abstract art drawing on both Native American motifs and European modernism. As well as exhibiting his work he was influential as the patron and editor of The Partisan Review from 1937-43. As its art critic he championed abstract art. He was also the president of the American Abstract Artists group during the 1940s. His work is held in various museums including The Smithsonian. 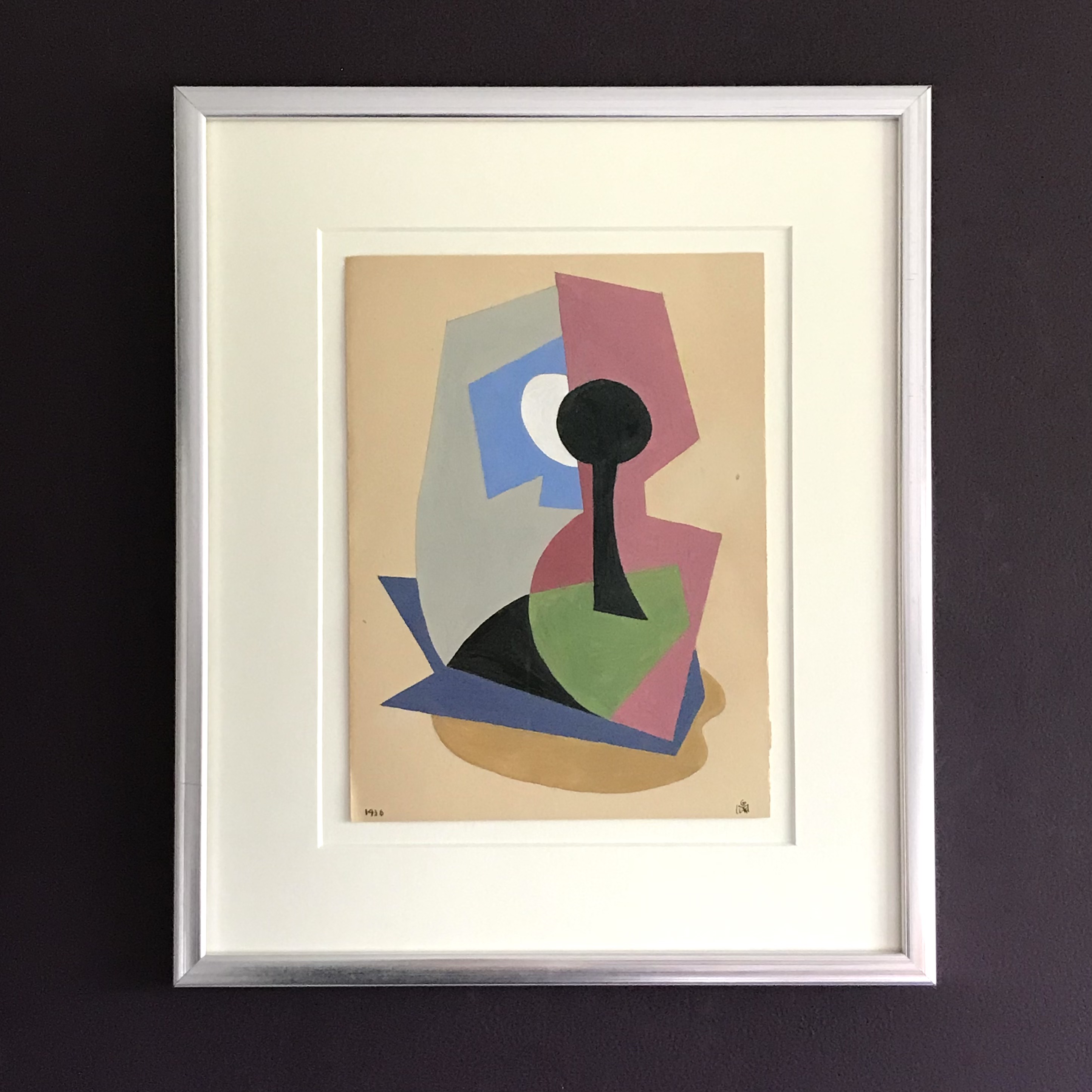 The second is a watercolour by Henri Pfeiffer. Pfeiffer (1907-94) began his studies in art at the University of Bonn. In 1924 he enrolled as an apprentice at the Bauhaus where he was taught by Paul Klee and Wasilly Kandinsky, two of the giants of European modernism. After the Bauhaus closed in Weimar he went on to study at the University of Cologne and continued to paint. He resumed his studies at the Bauhaus in 1929 after it relocated to Dessau. He continued his association with Klee after the closure of the Bauhaus but in 1933, after the Nazis had seized power, he was forbidden by the authorities from producing any more art as his work was deemed by them as degenerate. After the war he took on French citizenship and lived in France until his death in 1994. Exhibitions of his early watercolours associated with his time at the Bauhaus were held in Paris in 1959 and 61. This is likely to be one of those and appears in the catalogue raissoné of his work as number 99. 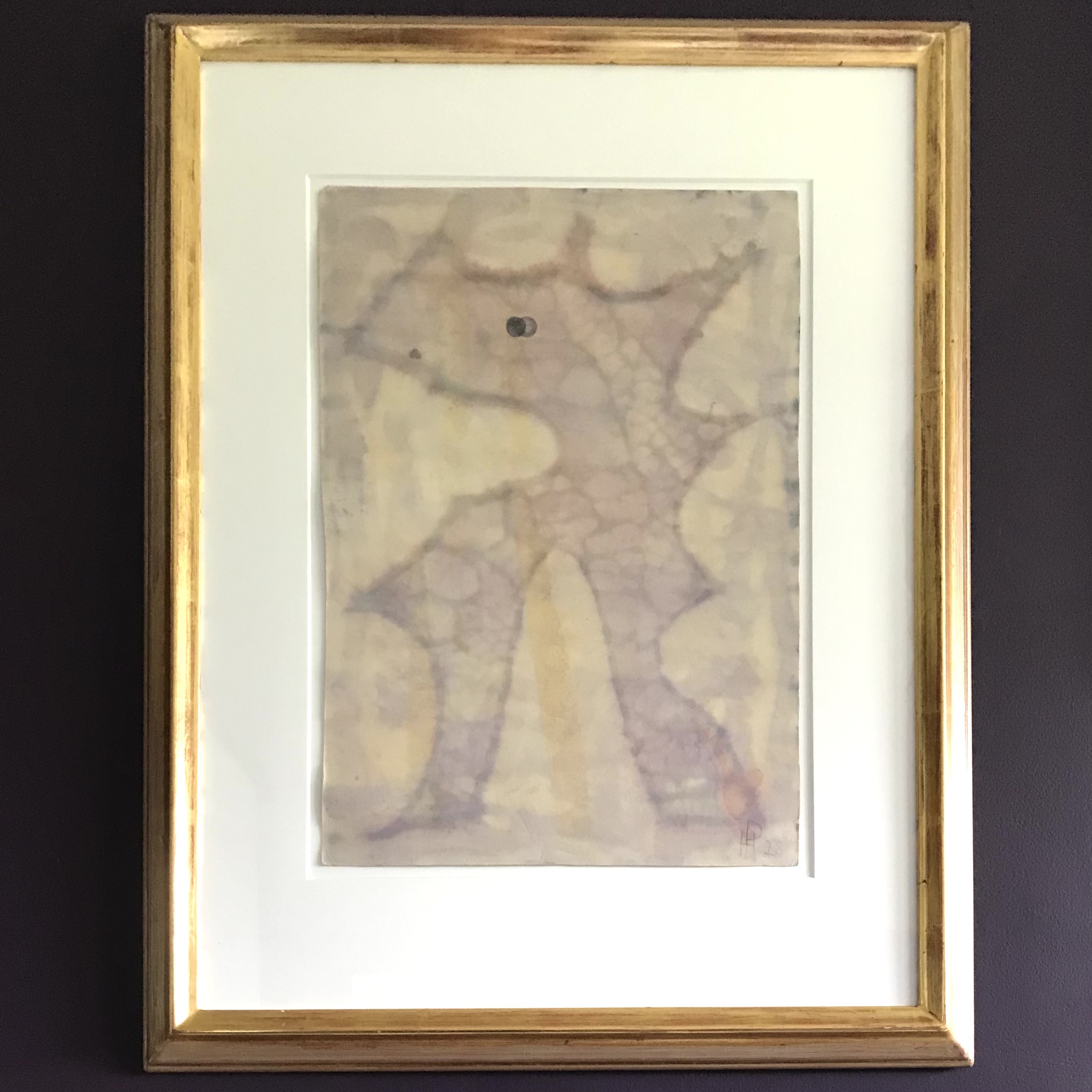 We also have a further four artworks listed this month. The first is a framed fabric design by leading British textile designer Robert Stewart called Patron Saints. This was produced by Libertys of London for the Festival of Britain in 1951. It is nice to be able to mark the 70th anniversary of that event with something that was made for it. Two further works included are by Swedish artists. The first is a self-portrait in enamel on metal by Nalle Werner from 1976 and the second an abstract mixed media work by Carin Lindegren from the 1980s. The last example is a bronze sculpture of a ballerina for the Swedish design company R+R designs which dates from the 1990s. 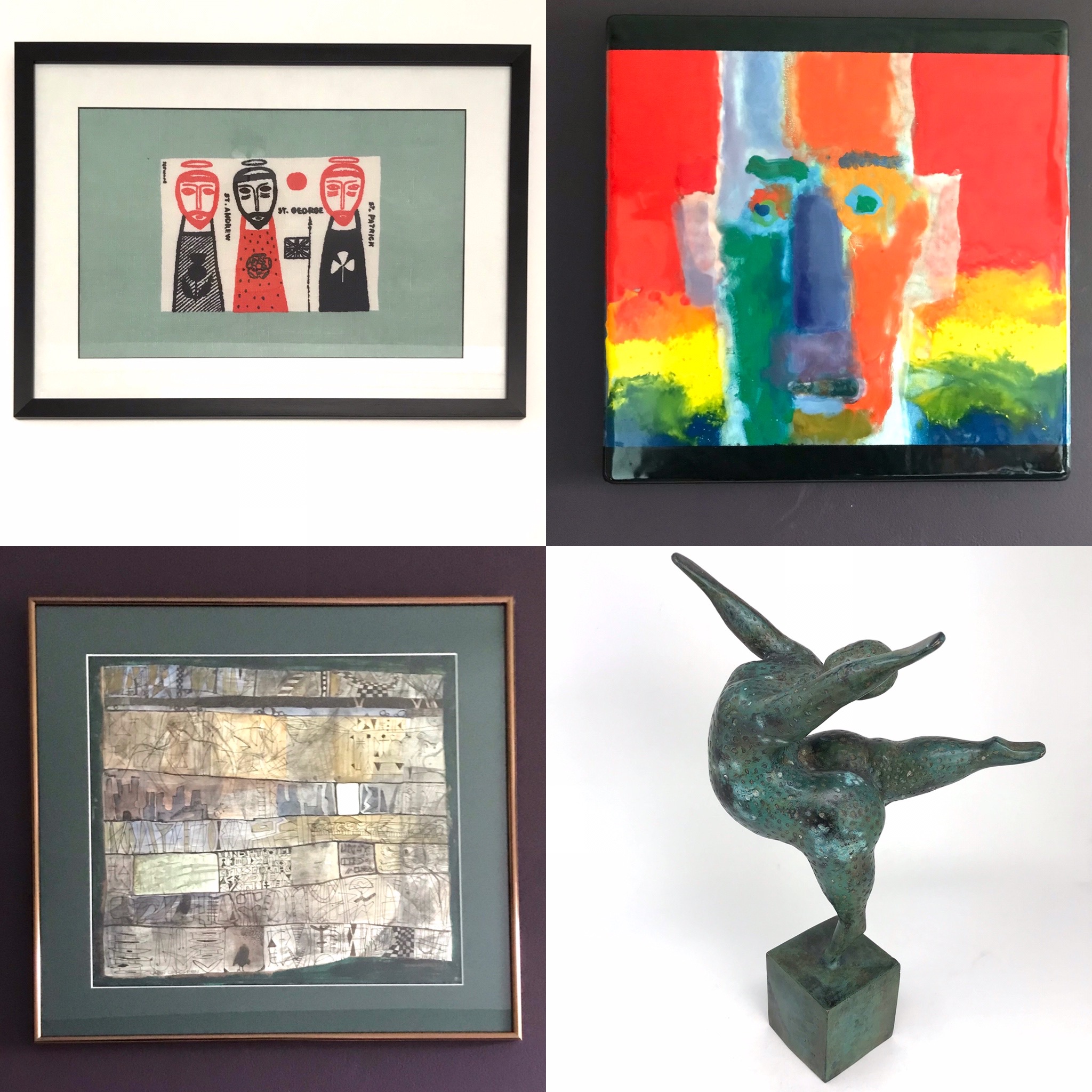 In glass, we have a range of pieces to offer including two designed by Olle Alberius for the Orrefors Gallery series from the 1980s. The first is a rare charger with the tree of life design from 1983 and the second is his well-known and sought after Astrakan Ariel vase from 1987. 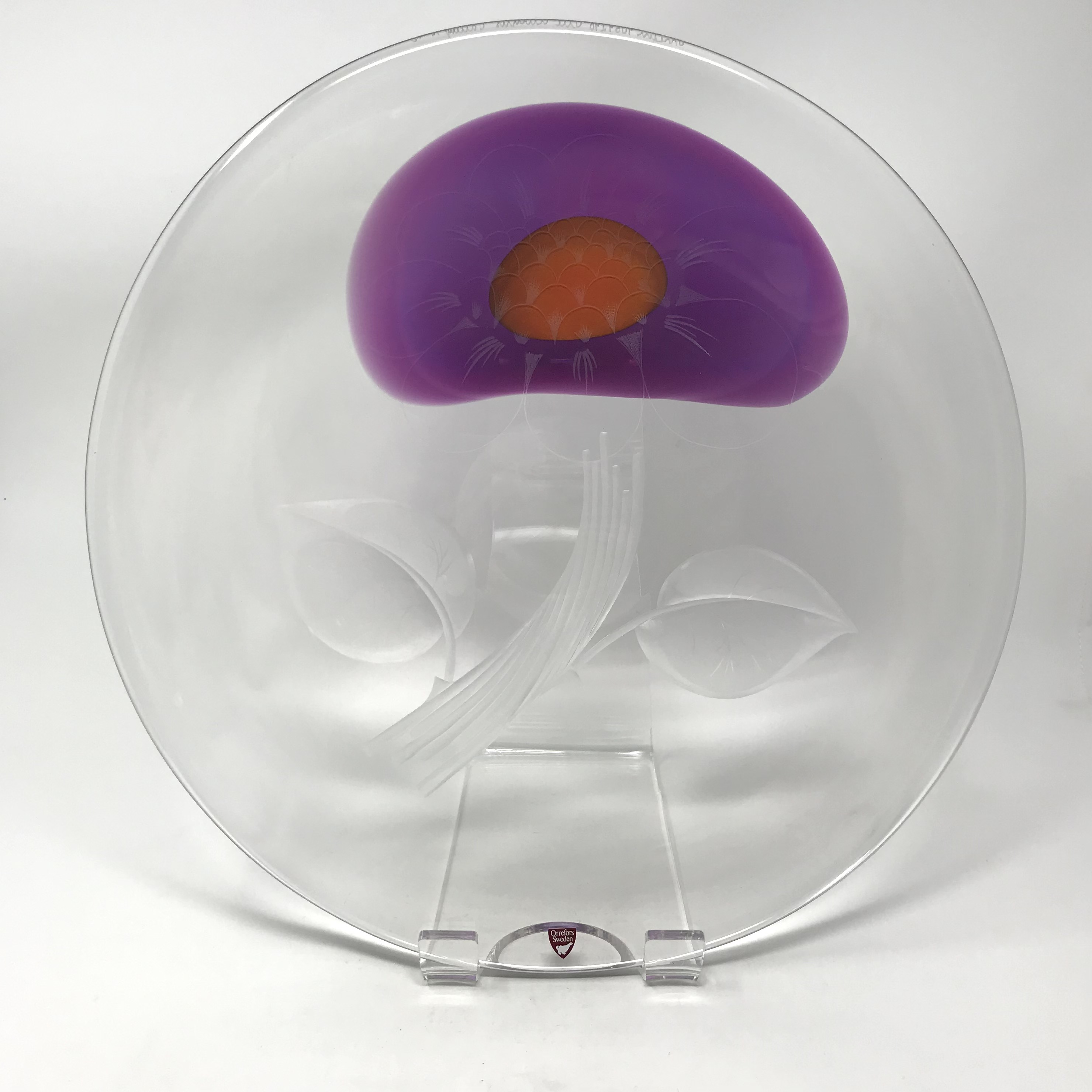 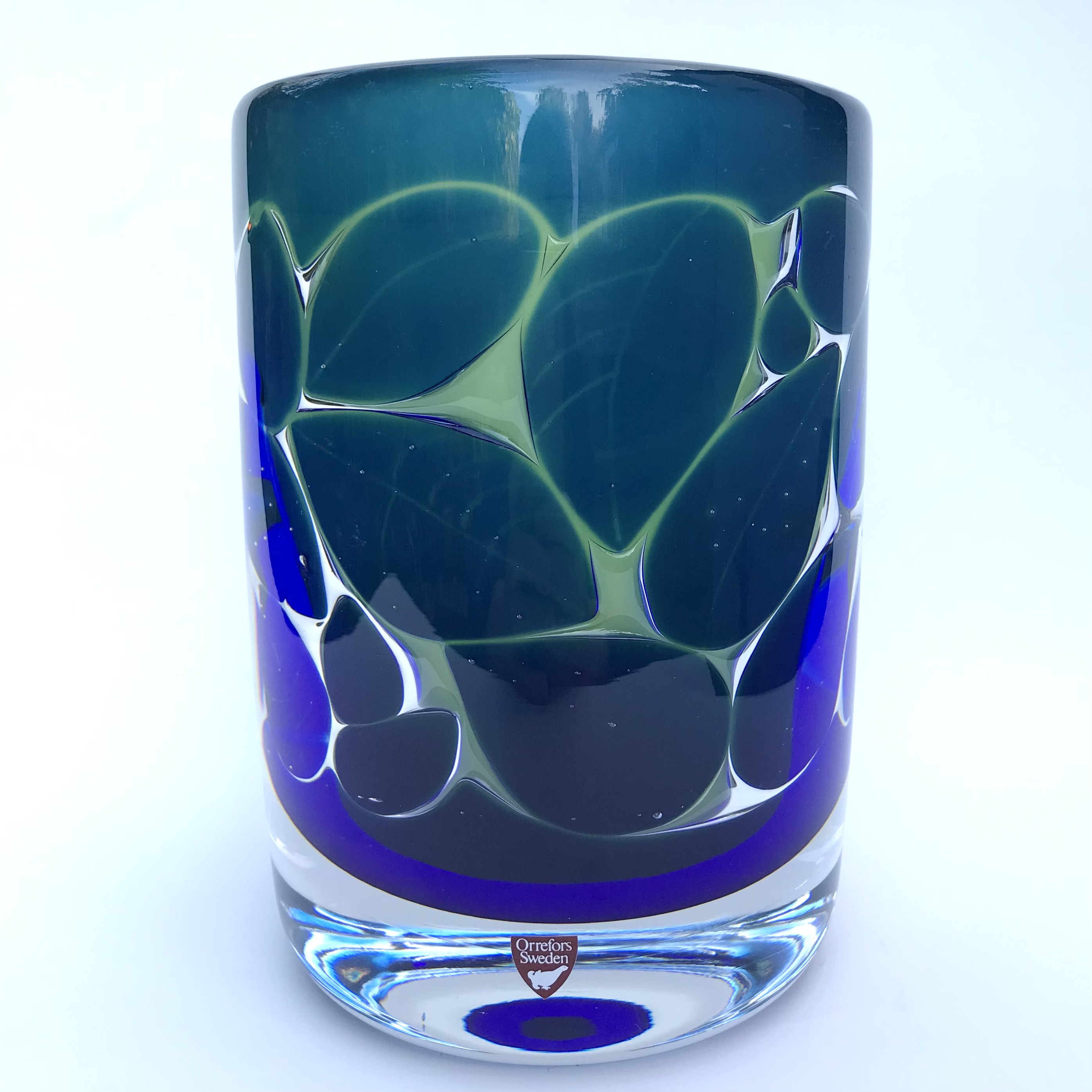 We also include five other pieces of Scandinavian glass. The first is a small Kraka vase for Orrefors by Sven Palmqvist from the 1950s. There is also an Aristocrat decanter and set of six matching glasses by Per Lutken for Holmegaard, Denmark and a small grey Sommerso bowl by Nils Landberg for Orrefors. We also have two later pieces for Kosta, the first is an iridescent bowl by Bertil Vallien as part of his artists’ collection series and the second a large Atoll bowl by Anna Ehrner – not to be confused with the often seen and smaller tea light holder. 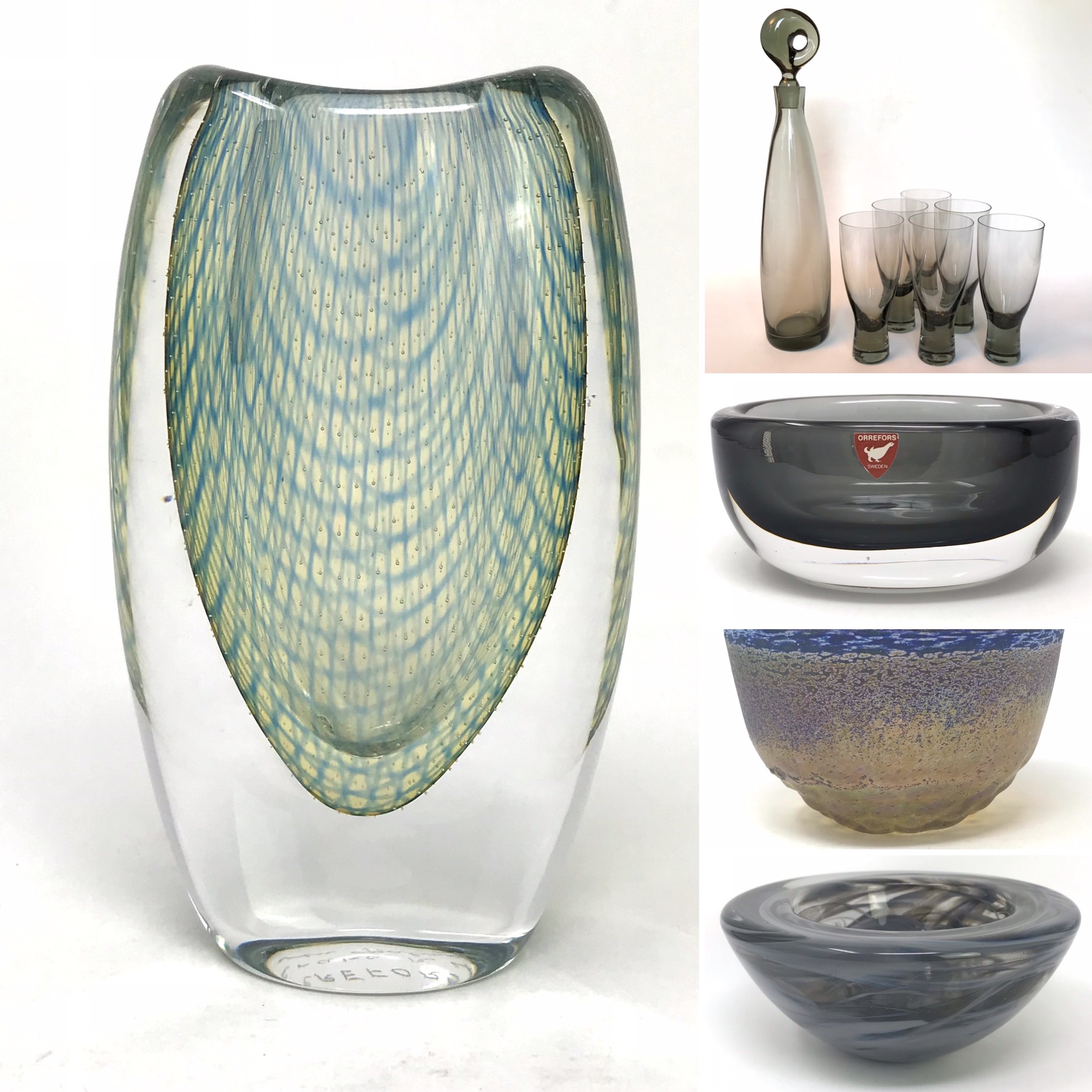 Jewellery includes two pieces from Georg Jensen. The first is his tulip bracelet which was designed in the 1930s by the man himself. This example has the post 1945 hallmarks. The second are a pair of tulip earrings. These were also originally designed by Georg Jensen in the 1930s. Our pair we re-issued as part of their Heritage Collection in 1999. From Sweden there is a very stylish Art-Deco brooch by Stigbert from 1941 and a starburst pendant designed by Knud V Andersen for Anton Michelsen in the 1970s. We also include our first piece of German jewellery, a kinetic pendant by Theodor Klotz c1960s/70s. 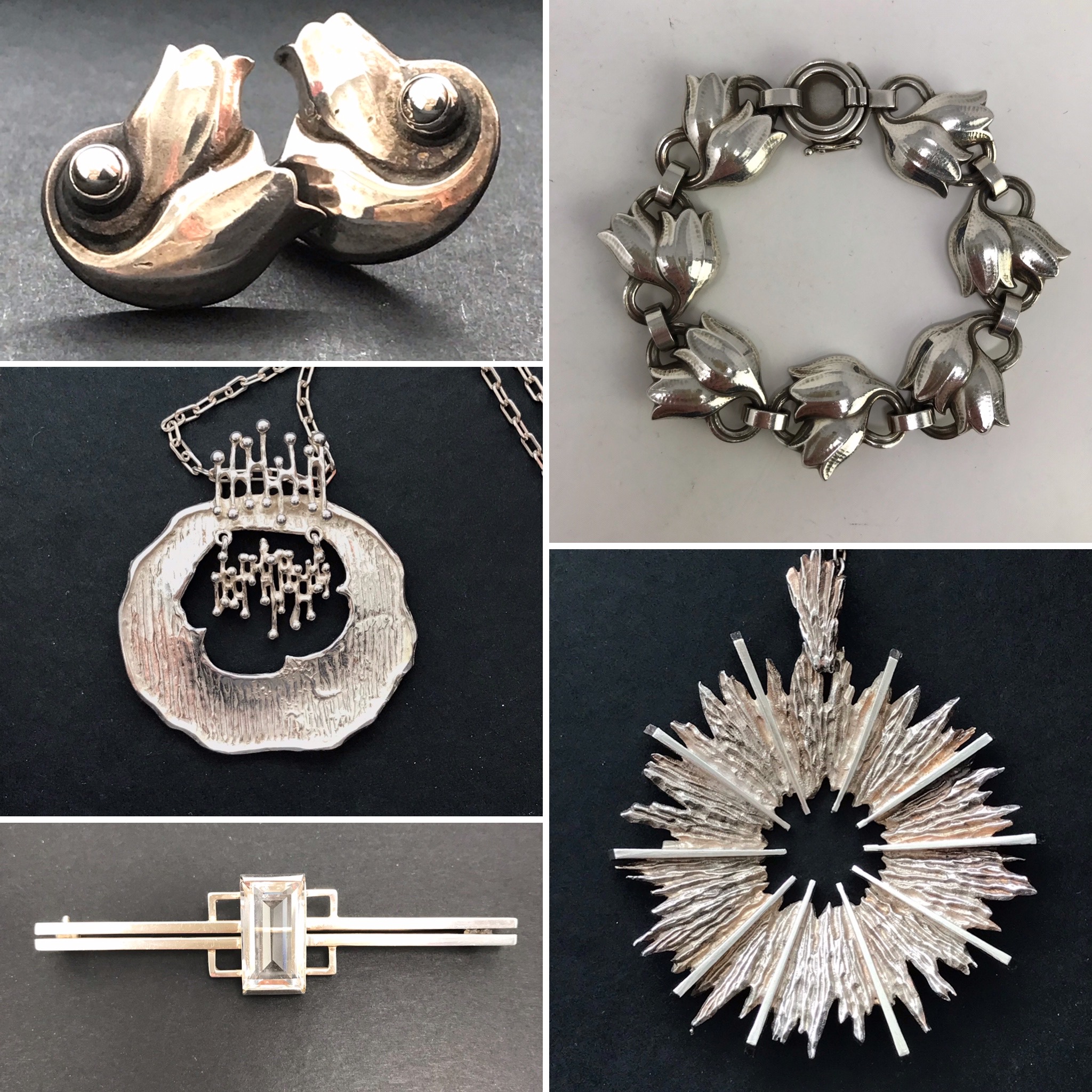 The ceramics selection includes two flambé pieces designed by Gunnar Nylund for Rörstrand in the 1930s. The first of these is a large, unique vase showing a scene of Bedouin on camels in front of the pyramids, the second an abstract dish. We also have a bowl with a beautiful chocolate brown glaze by Carl-Harry Stålhane for Rörstrand from the 1950s. There is also a unique shallow studio bowl by Olle Maving that dates from some time after the 1960s and shows an abstract fossil design beneath the glaze. 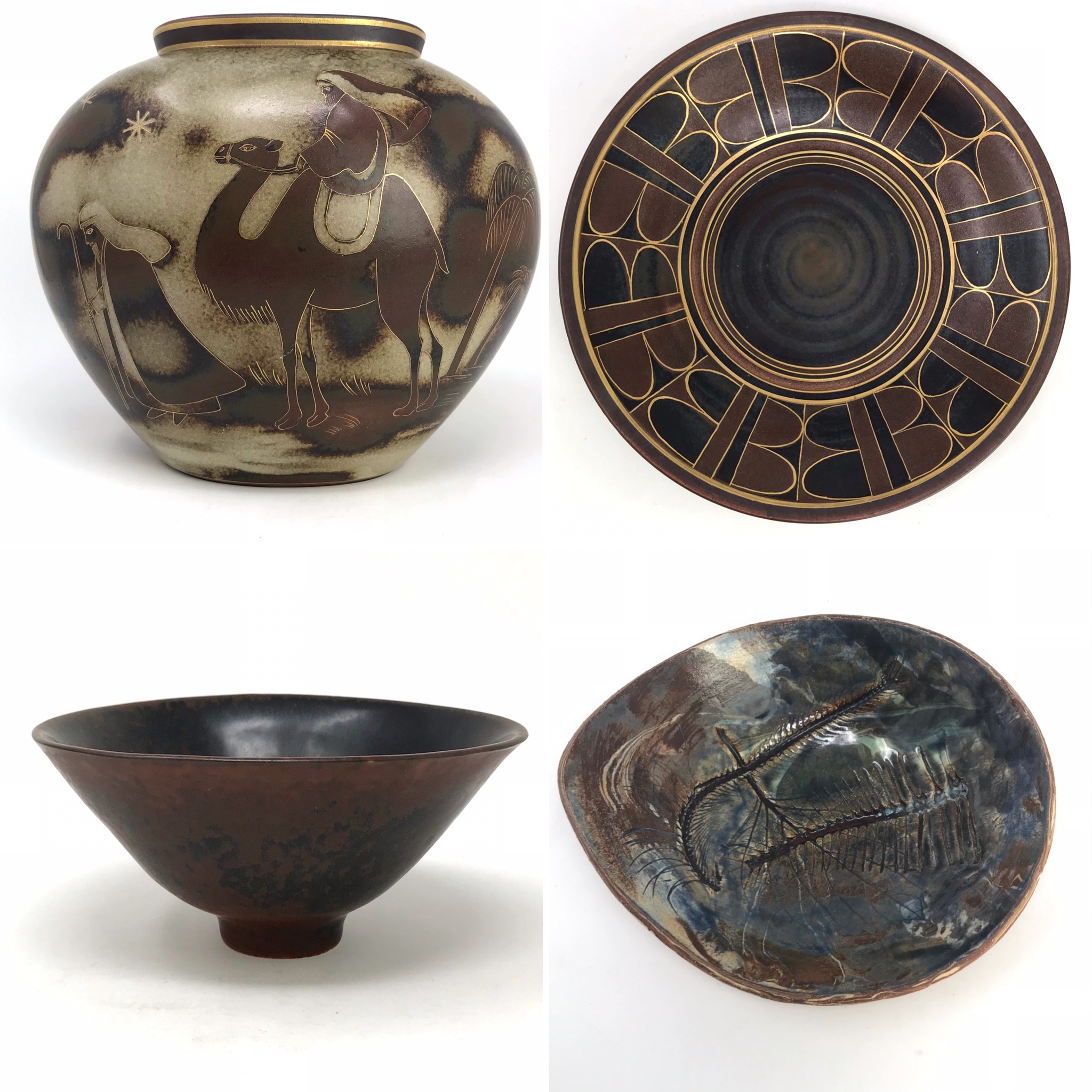 Away from Sweden we have two early pieces of Delphis from Poole Pottery. These were both painted by Shirley Campbell some time in 1968-9. While the Delphis range divides opinion we have always liked the early pieces of it made before about 1970.

Finally, it is a while since we have listed any bronze items. This month we have two Art-Deco pieces, a wall-hanging plaque with a mythological scene by GAB from the 1930s, and a patinated bronze King vase from Ystad, Sweden also from that decade. 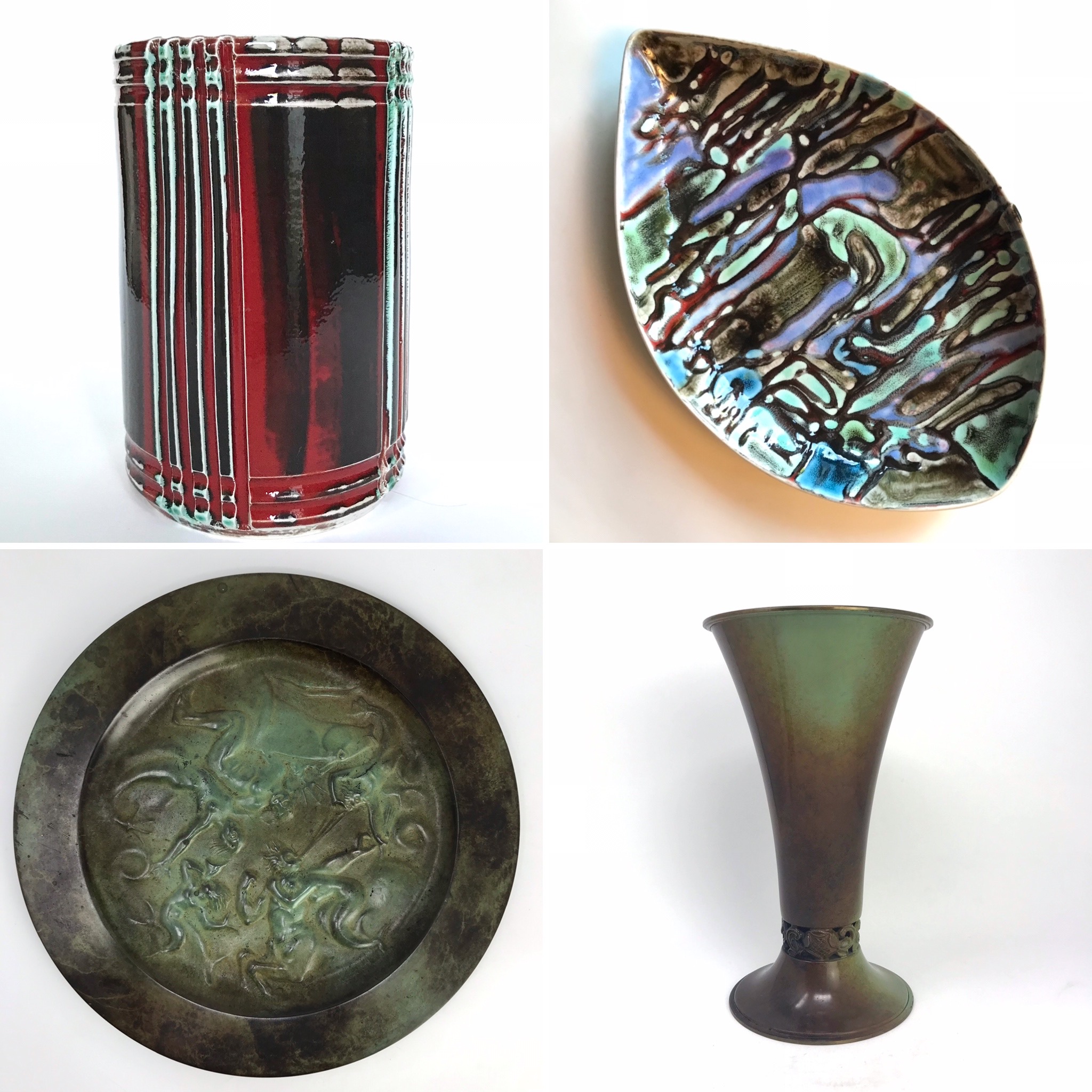