This month we offer a wide selection of new stock items. There is a fine harbour scene oil painting by Kai Christensen and two abstracts by Dan Nygård and Christer Stromhölm. We are particularly excited by gouache we have by the latter as Stromhölm is a world renowned photographer. He was part of the Fotoform group in the 1940s/50s and is best known for his scenes of Parisian life in the 1950s. 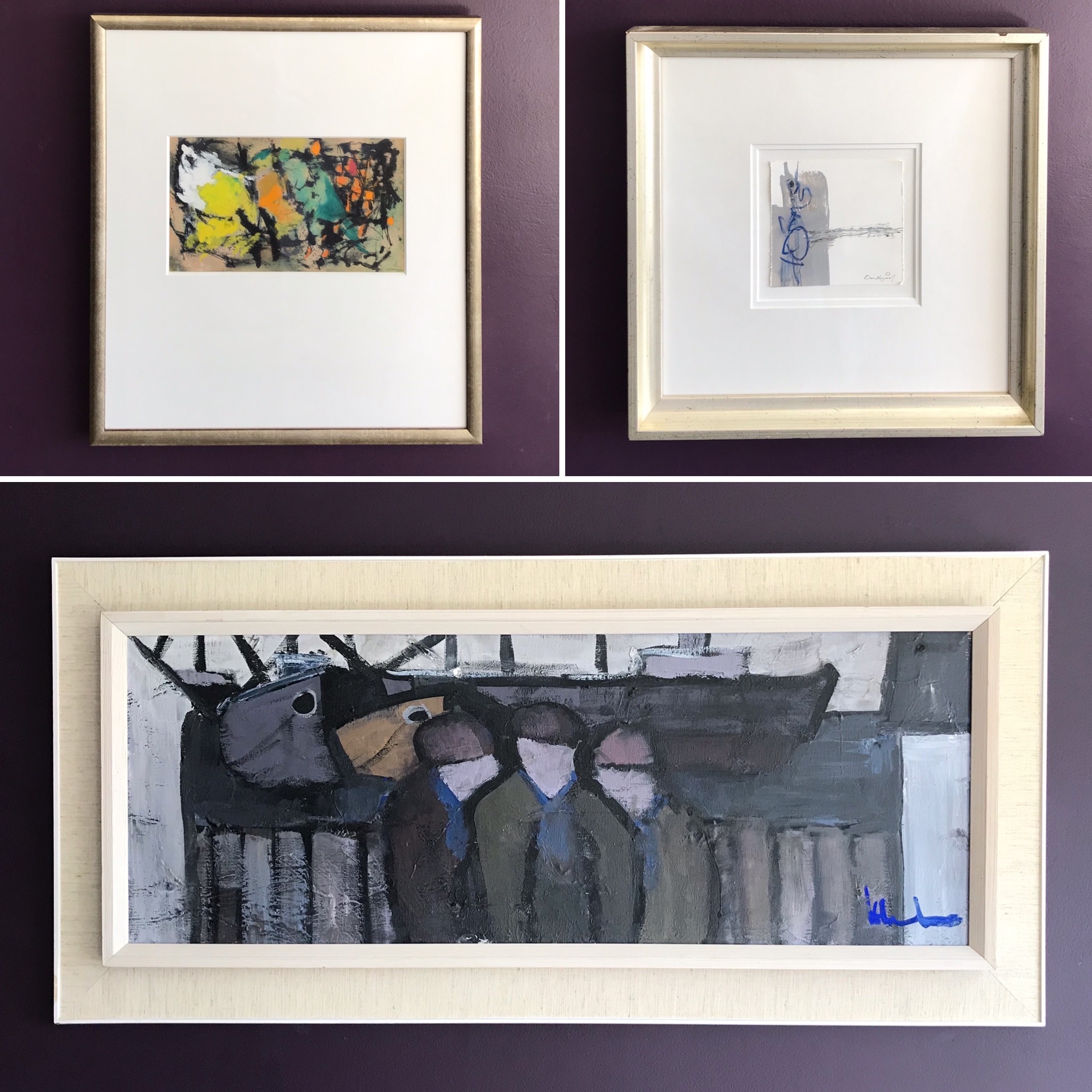 In our prints section there is a contemporary work by Curt Fors in bold colours. We have also included for the first time some art ephemera. We have recently acquired a small collection of private invitation cards to gallery exhibitions by very famous artists. This month we include invites to shows of works by Andy Warhol, Jasper Johns, Cy Twombly, and Roy Lichtenstein. These would originally have been issued to customers of the gallery as well as the press and other important people in the art world. Collectable in their own right as they provide a connection to the work of these leading artists, they contain images of artworks and so could be framed and put on display too. 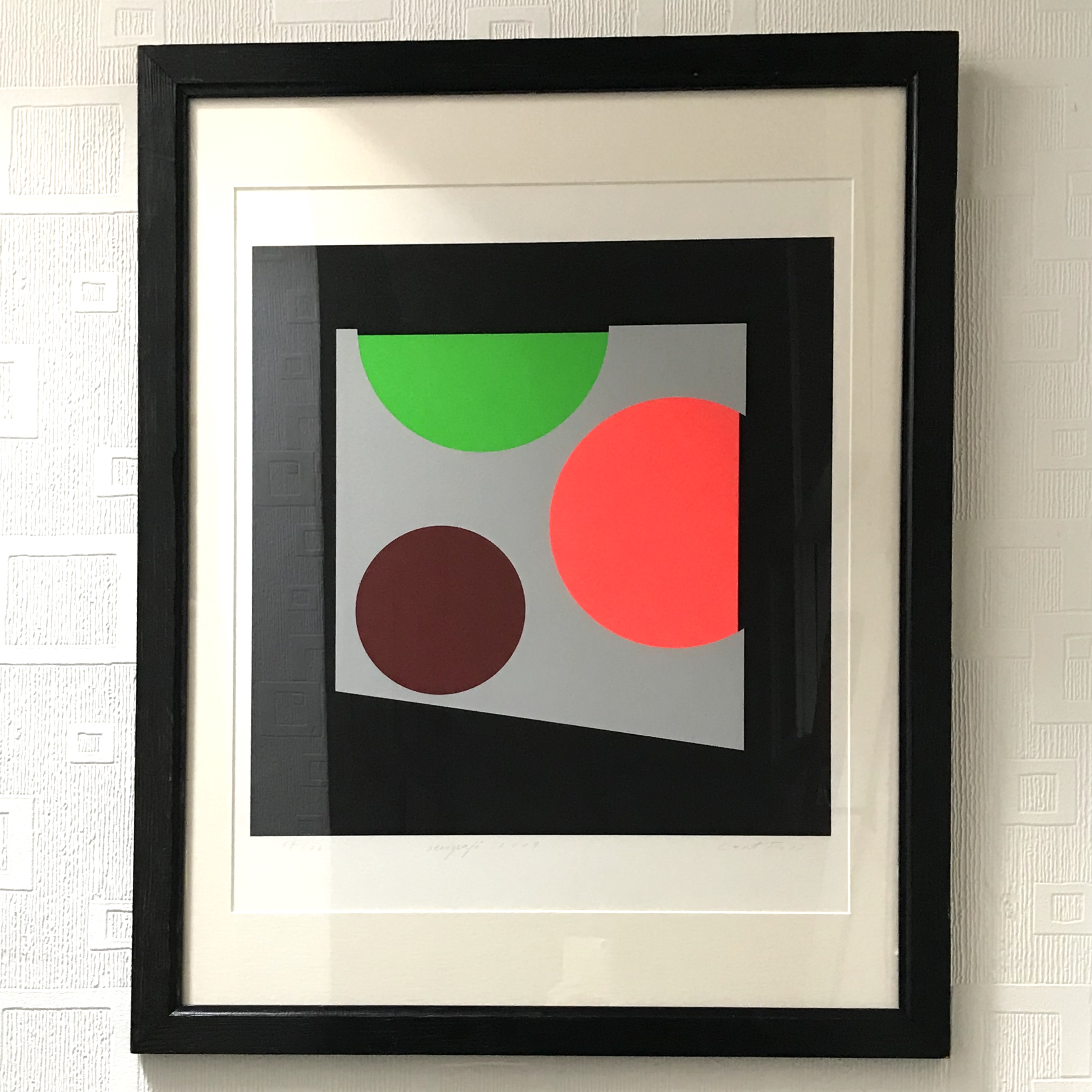 Jewellery this month included two Danish pieces by N E From, a pendant and a ring both with polished black onyx. We also have a pendant called Chilled Champagne that was designed by Matti J Hyvarinen in Finland in the 1970s. 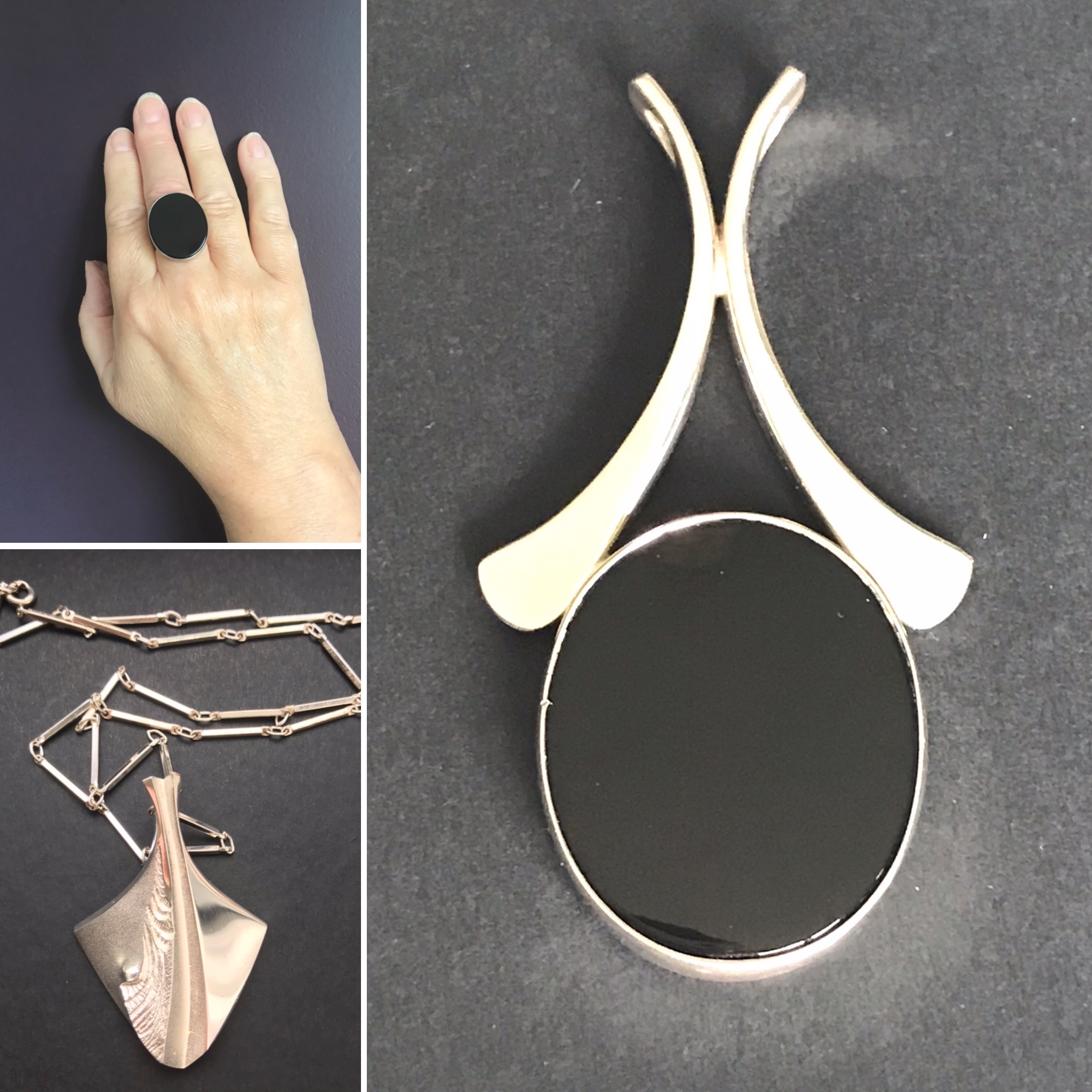 Our ceramics include a fine selection of Danish and Swedish pieces including a unique bowl by Bode Willumsen and an early vase by Carl-Harry Stalhane from c1948. 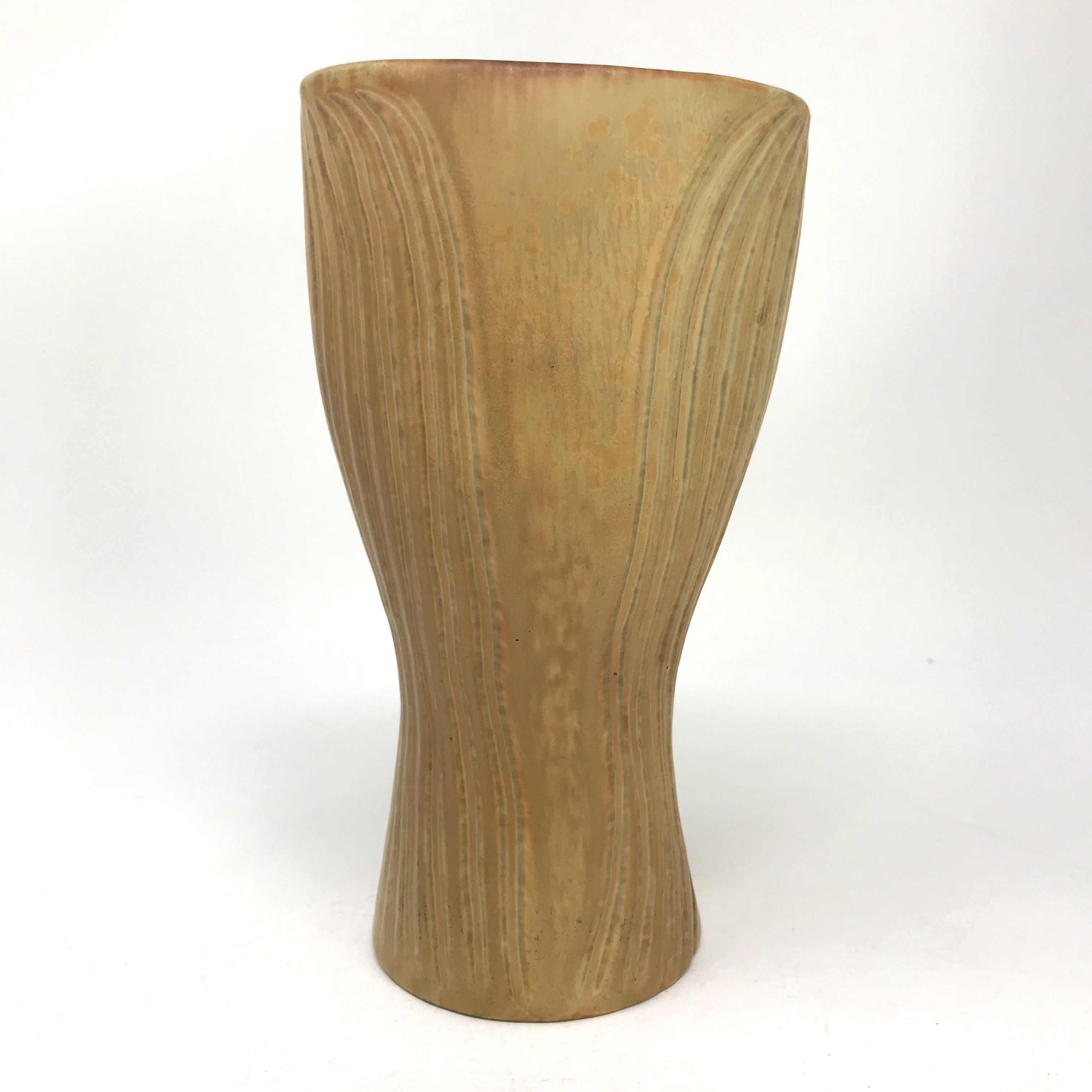 The highlight, though, is a rare piece by the Italian ceramicist Guido Gambone. Gambone is one of the great names in Twentieth Century ceramics. His combination of primitivism with modernist art in clay makes his work reminiscent of Picasso’s ceramics in their playful re-interpretation of the art of ceramics. What is really significant, though, is that Gambone started to develop this style of pottery about a decade before Picasso ever decorated or threw a pot! Our piece is for the Ceramiche Artistiche Solimene studio and dates to the 1940s. 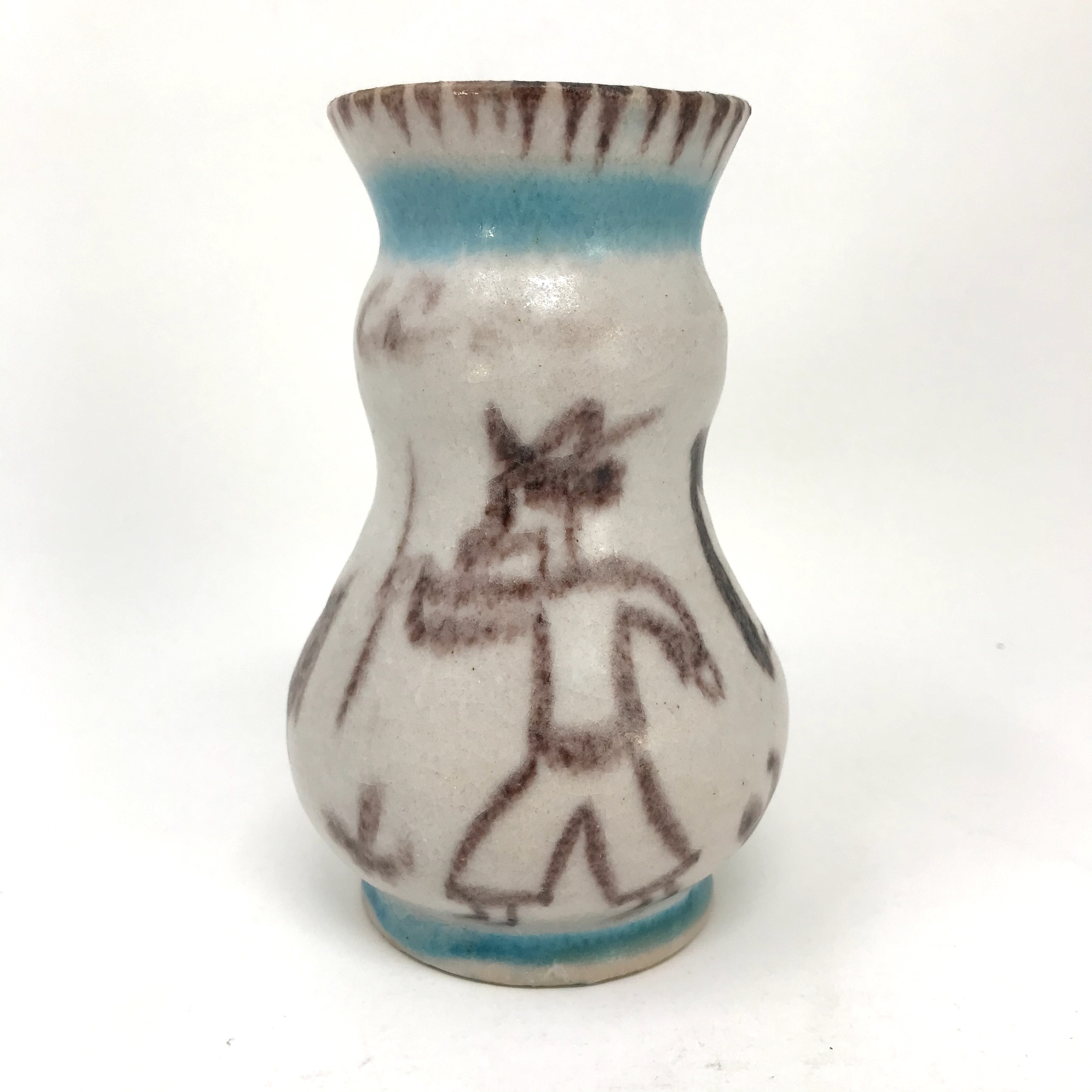 In glass we have a 1990s lidded pot by Eric Hoglund, leading Swedish glass designer, for the Czech glass studio Novy Bor, a fine, large centrepiece dish by Edvin Öhrström  and a unique glass sculpture from c2003 by contemporary Swedish glass designer Robert Oldergaarden in the form of a gourd. 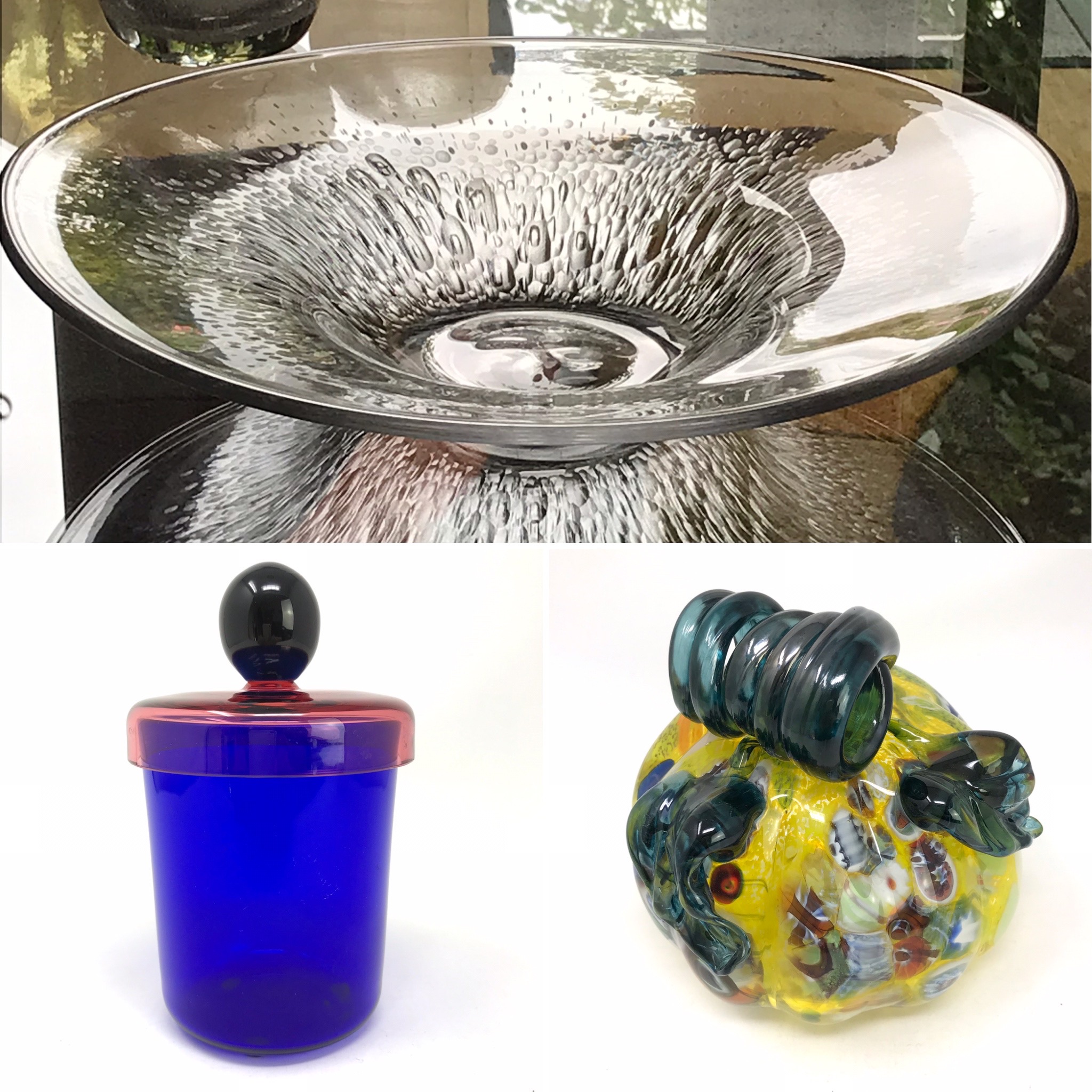 Other highlights include some newly made cushion covers from vintage 1960s fabric designed by Tibor Reich, a superb Bodum teak and metal cruet and tray set by Georg Fontana and a lovely lidded silver pot with a turquoise cabochon by MGAB from 1953. 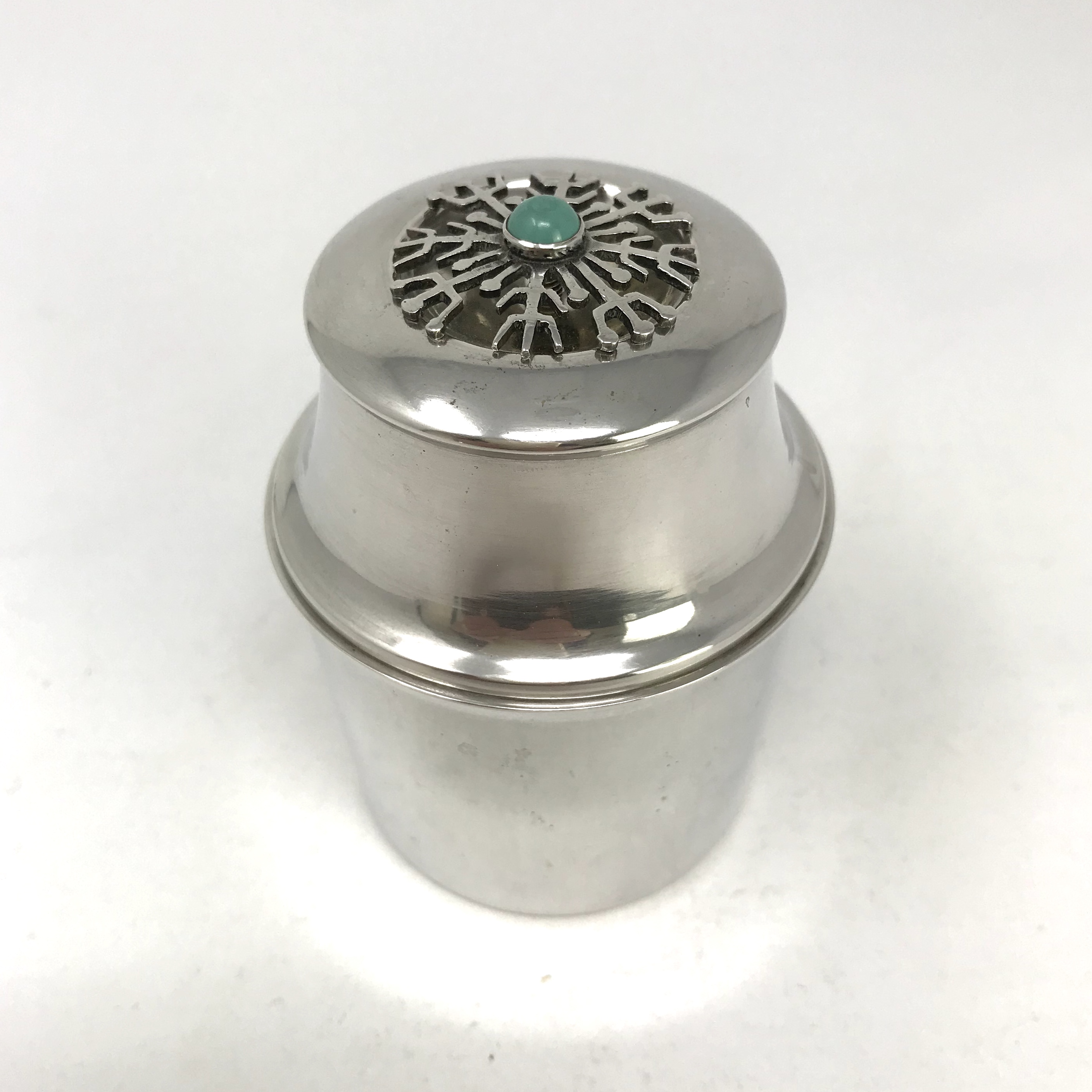 We also have two candle holders. The first is an iron and glass candelabra that hangs one metre designed by Bertil Vallien for Boda Smide in 1968. The second, in brass and copper, has a distinct Bauhaus look. It dates from the 1920s and is marked though we have been unable to identify the marker. We sourced this in Germany so there may be a direct Bauhaus connection.  At the very least there is a strong stylistic influence. A piece worthy of further research. 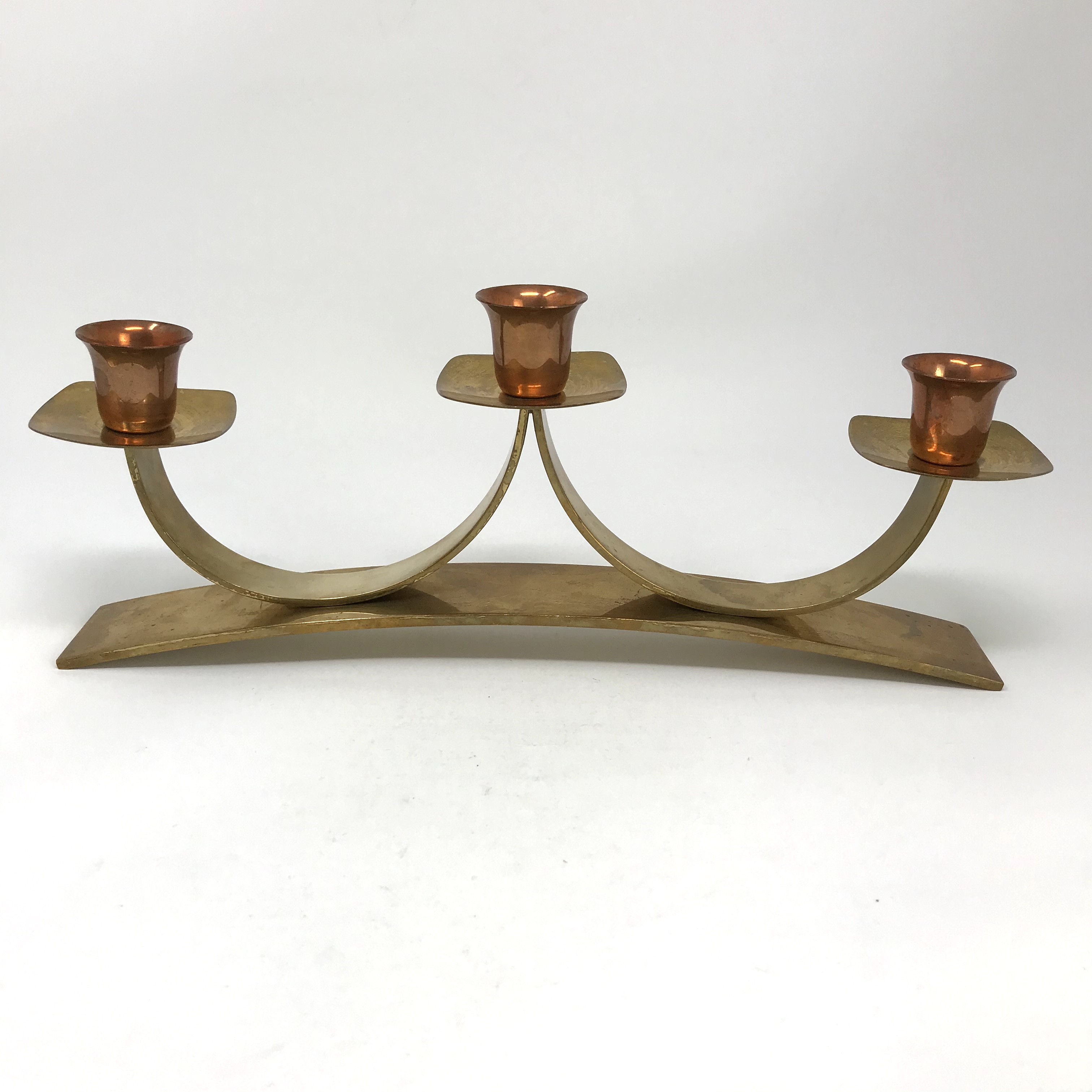 You will also find two rugs, a beautiful rya in autumn russet colours and a röllakan with geometric pattern in neutral tones that would sit well in just about any room décor. And for those of you who like a funky 70s vibe check out our West German swivelling Emsa snack trays in orange colours. Perfect for your next Abigail’s party nibbles selection. Cheese and pineapple to the ready! 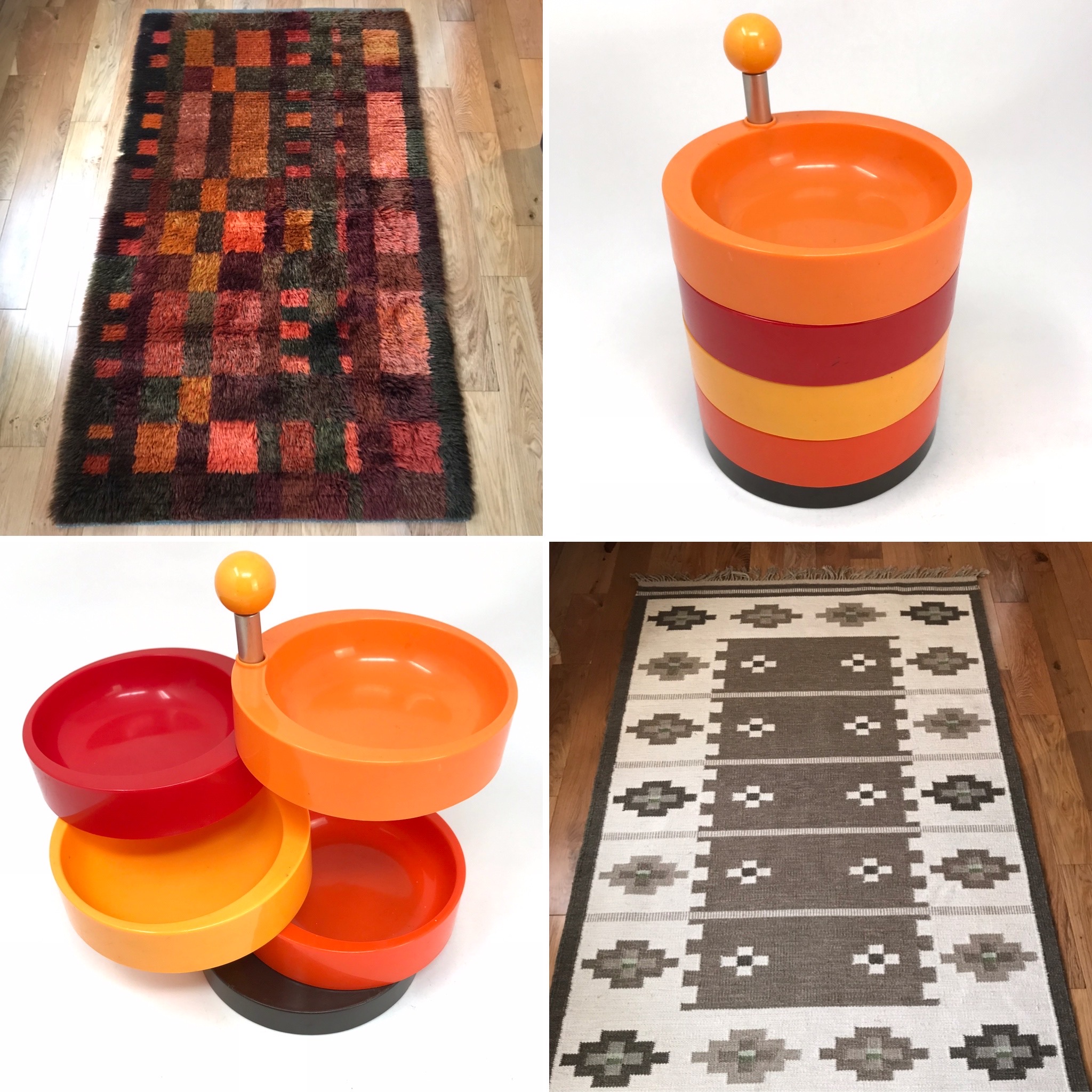 Next month, amongst our selection of items, we will be holding another selling exhibition, this time ceramics by the leading designer Gunnar Nylund who worked in both Denmark and Sweden. This includes a couple of early rarities as well as a good cross section across his wide ranging work from all periods from the 1920s-60s.