Here are the new stock items we are listing for June.

Starting with jewellery, we have a silver 'Ship of Good Fortune' pendant on a torque designed by Bjørn Sigurd Østern for Norwegian silversmiths David-Andersen. This has a lovely turquoise-blue Amazonite cabochon. There is a fine silver brooch by Danish jewellers N. E. From, a pendant by Arne Johanson and a vintage bangle. 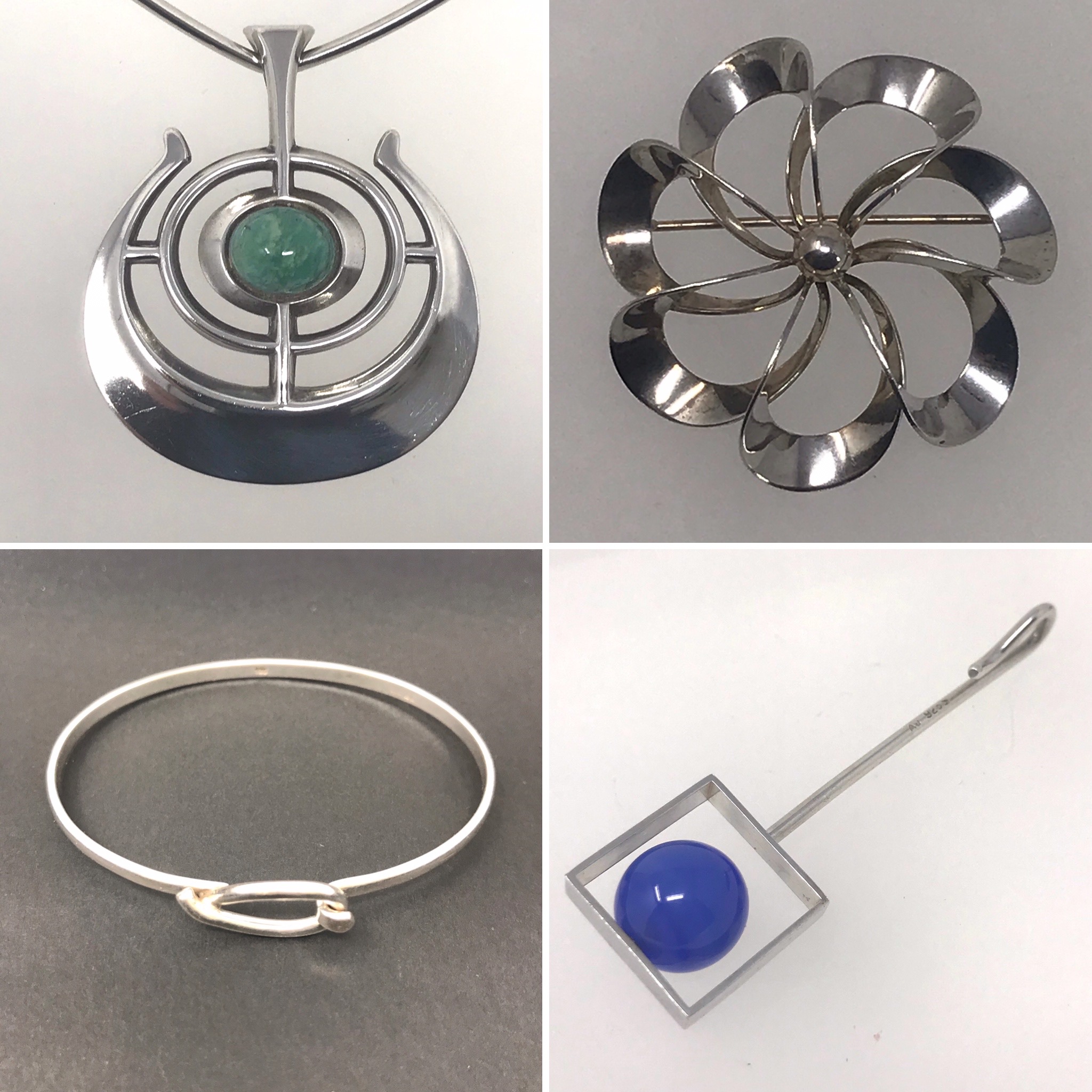 Art is well represented by an oil painting of an urban landscape by Gunnar Jonn, we have sold three of his works in the past and he is one of the Swedish artists we follow. This picture is signed and dated to 1959. Like most of his work it has a strong expressionist feel. There are two further original works by British based artists. The first is a portrait of the potter Ian Godfrey by the New Zealand-born artist Royce Sutcliffe. Sutcliffe spent some time in London and Paris in the early 1960s and had an exhibition in London in 1962. While there is no label to confirm it, we think this portrait, in its original simple exhibition frame, could well have been from that show. The other work is an abstract by Peter Dover called 'Wirral III'. This is dated to 1994. Dover is both an artist and musician and taught at Liverpool Hope University. 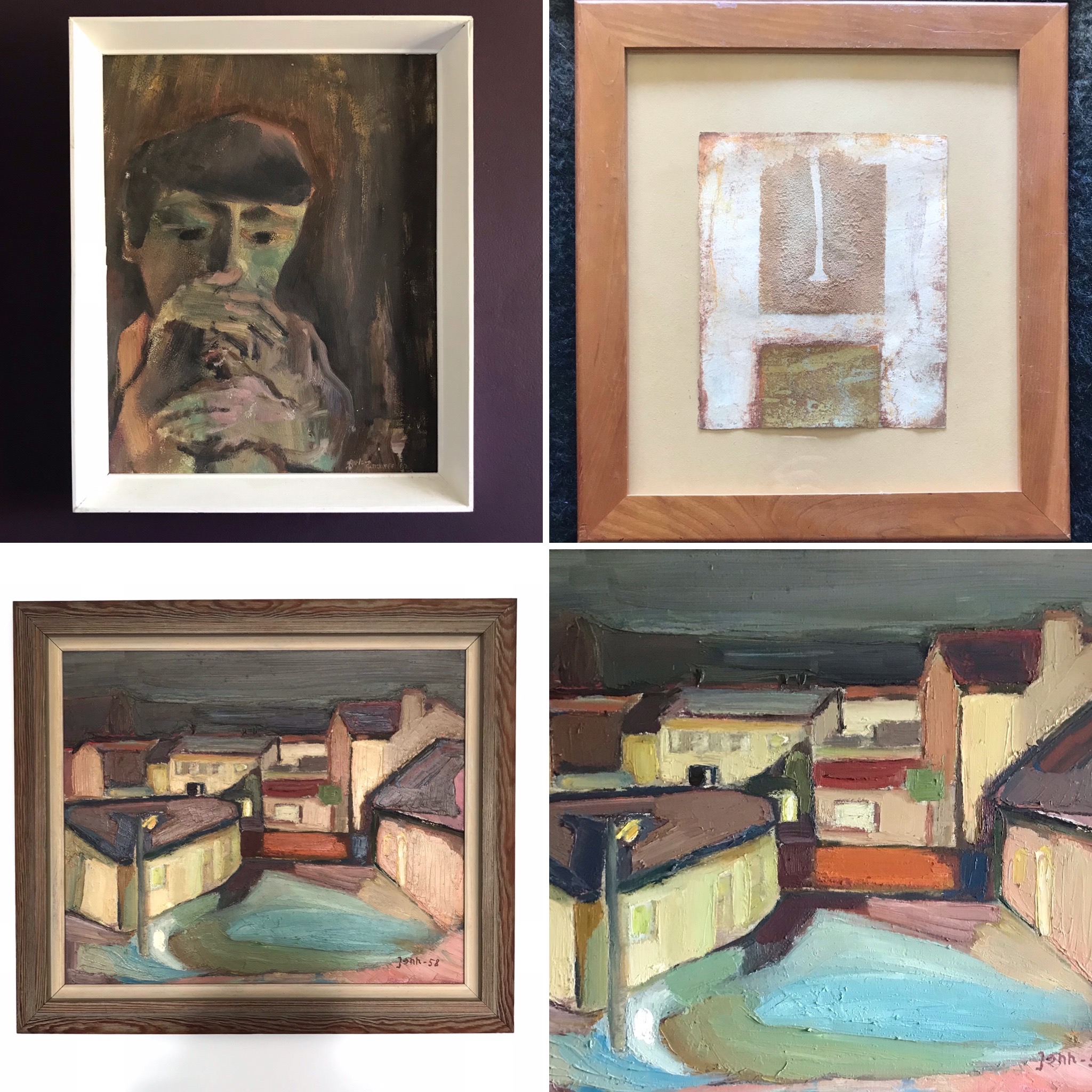 Following on from last month we have another signed lithograph by the French artist André Minaux. This one shows an interior scene and is a classic example of his work. This dates from a series produced in 1974. A second lithograph is by British-born but Paris based artist Roy Adzak. This bold and striking work from the early 70s is called‘Profiles I’ shows human head outlines in profile. 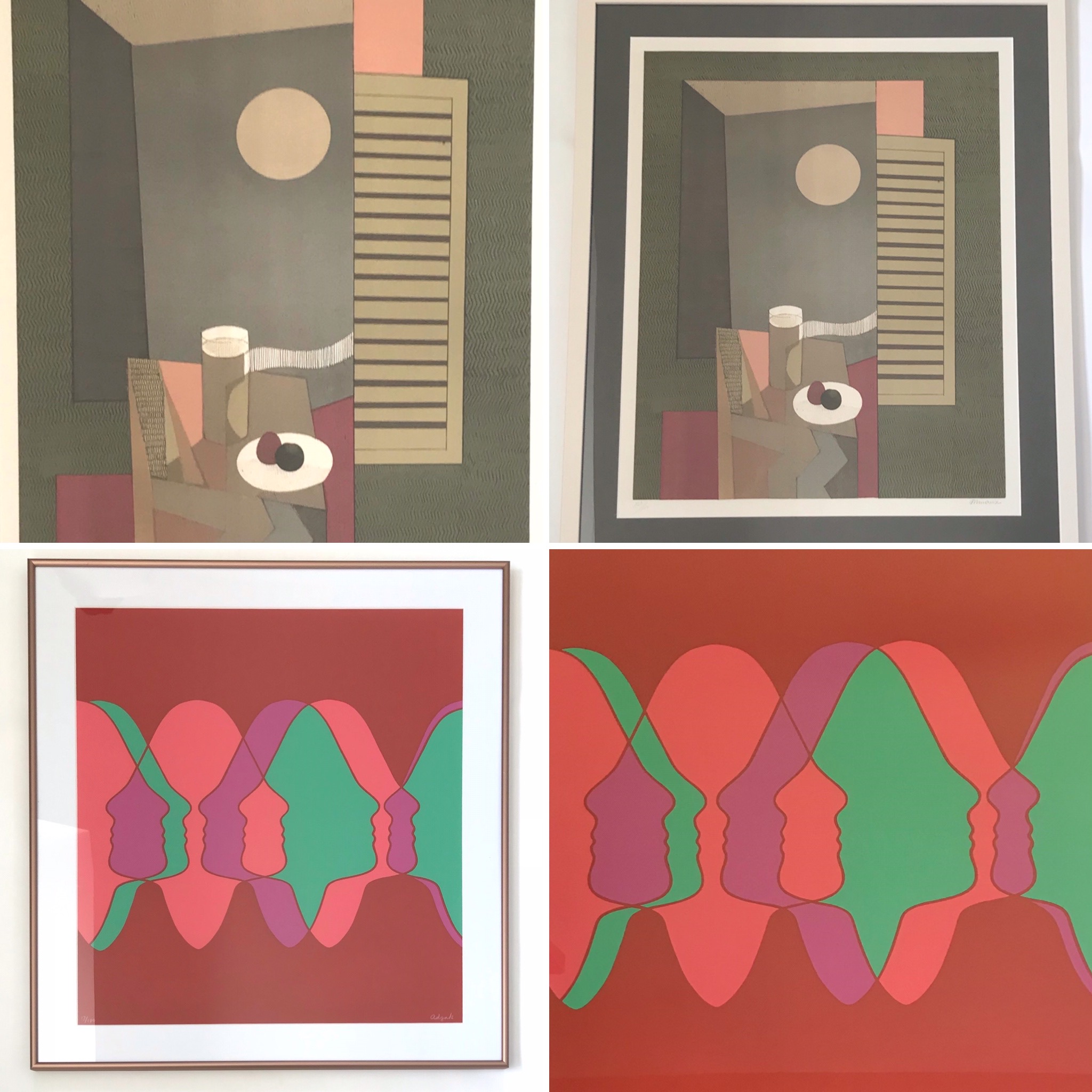 We also include four pieces of glass: a pre-war simple modernist vase by Elis Bergh for Kosta, a classic tall and slender vase in red by Vicke Lindstrand for Kosta from the 1950s, and a beautiful green Fuga bowl by Sven Palmqvist for Orrefors also from the 1950s. Our fourth piece is a bit of a puzzle. It is a slender Graal vase showing skulls in red and black that have a distinctly ghostly look. This is an Incalmo piece, meaning it is made of several sections of glass fused together during production. This was a technique that originated centuries ago in Venice but has remained in use until the present day. We have not been able to identify the maker of this stunning vase. The Incalmo technique was rarely used in Scandinavia so we don’t think it is from there. Our best guess is that it is a piece of studio glass from Stourbridge in England made some time in the last 30 years. It is likely to be a one-off. 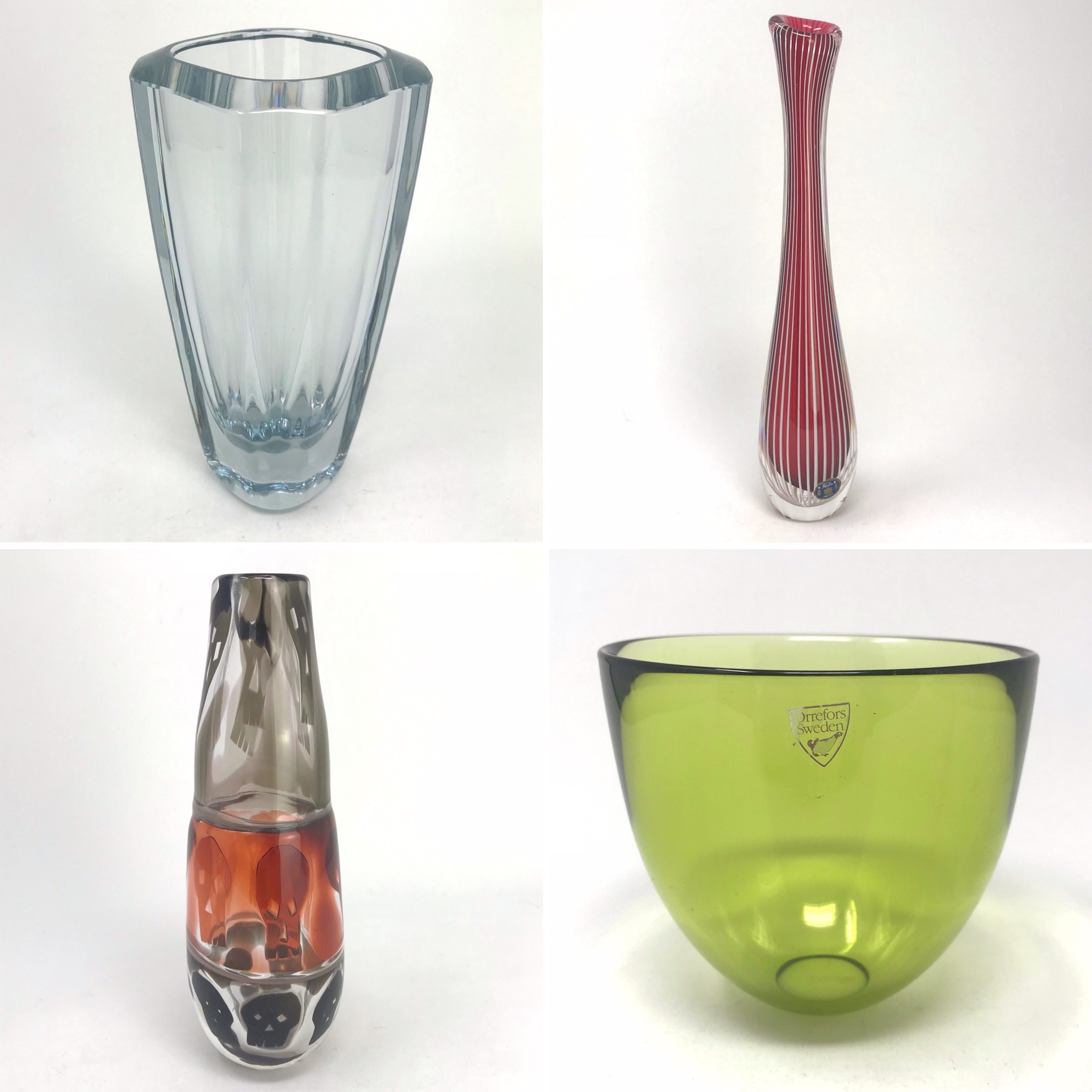 Our ceramics are all much easier to identify and are all Swedish. We have a KAPA piece by Wilhelm Kage for Gustavsberg, a unique studio vase by Rolf Palm and two unique planters and a bowl by Britt Louise Sundell for Gustavsberg. 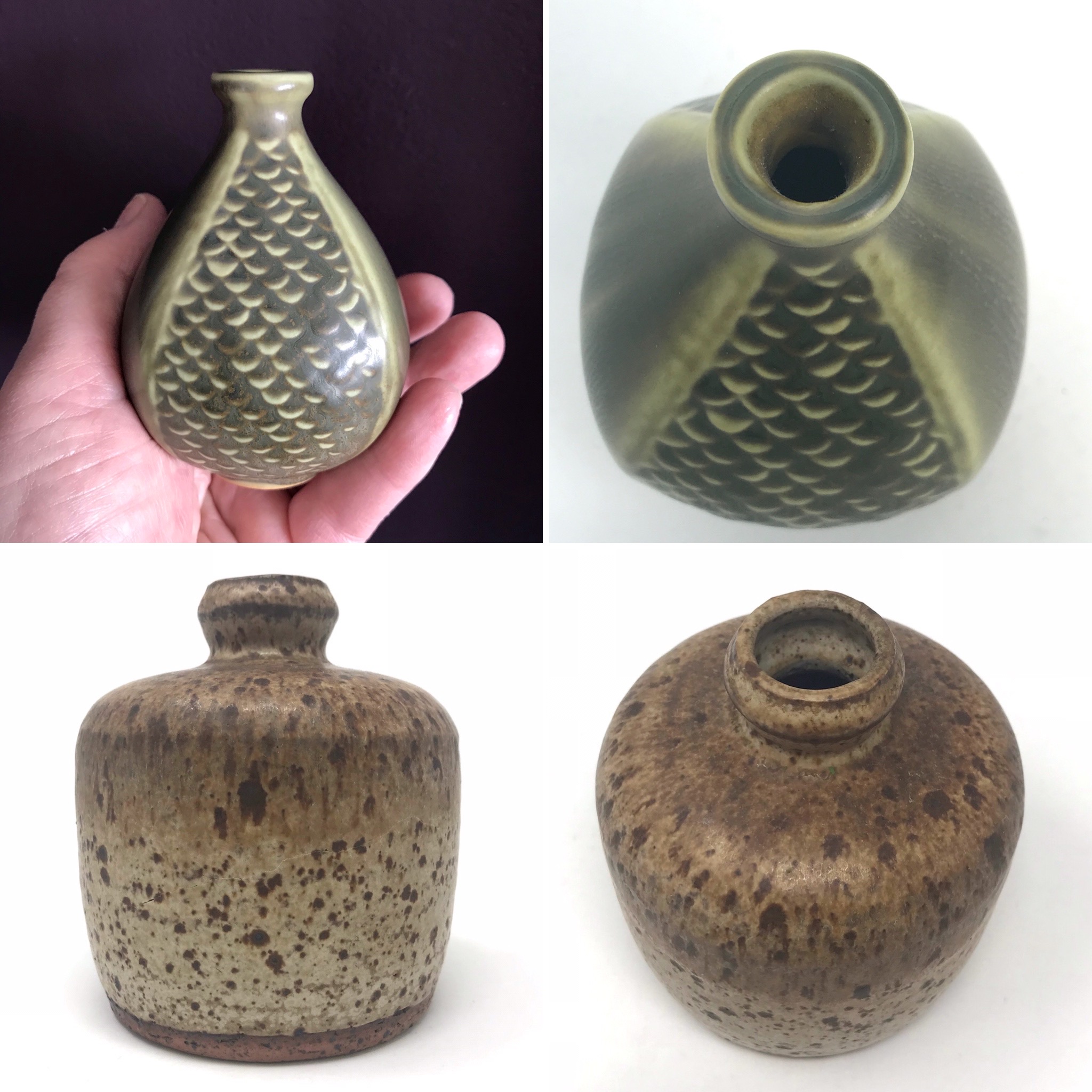 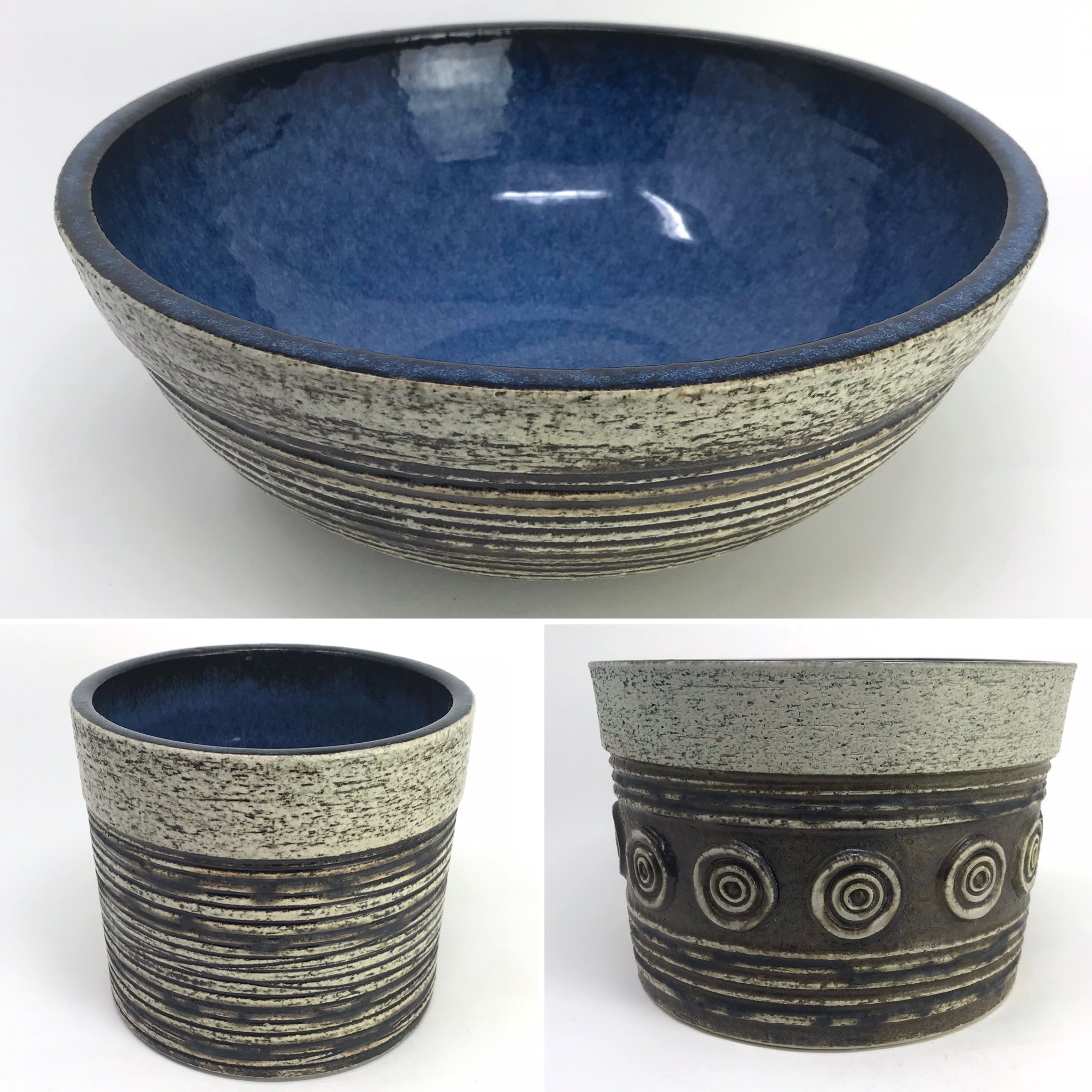