Scandinavia as a region comprises Denmark, Sweden and Norway. If you include Finland too you are really referring to the Nordic countries but the term has become synonymous with all of them. Workshops and designers in these nations have been producing high quality, craft-made objects and have had a keen interest in design for a long time. The Scandinavian style is most commonly associated with modernist design from the mid-century period, especially from 1945 to around 1970. Designers produced stylish objects that adopted the clean lines of modernism coupled with simple shapes, utility and accessibility. They created a new look for a new time coming out of a dark period in Europe’s history and wanting create a style that looked to the future rather than to the past.

In the early decades of the Twentieth Century the style adopted in the Nordic countries often reflected wider European influences and tastes. The Art Nouveau and Art Deco styles were as influential here as they were in other countries and high quality objects were made under their influences. For those interested in what the Scandinavian countries had to offer in the period from 1900 to around 1940 amongst the best examples are the silver jewellery made by Georg Jensen in Denmark, the bronze items designed by the Danish designer Just Andersen and the etched glass from Orrefors in Sweden.

Georg Jensen — the man — lived from 1865 to1935 and the company that bore his name continued after his death and is still going as an internationally recognised brand to the present day. Many of the early designs that he and others produced drew on the Art Nouveau fascination with nature. Foliage, flowers and animals often feature in the designs. This bracelet, called Moonlight Blossom, is typical of the style in this early period. 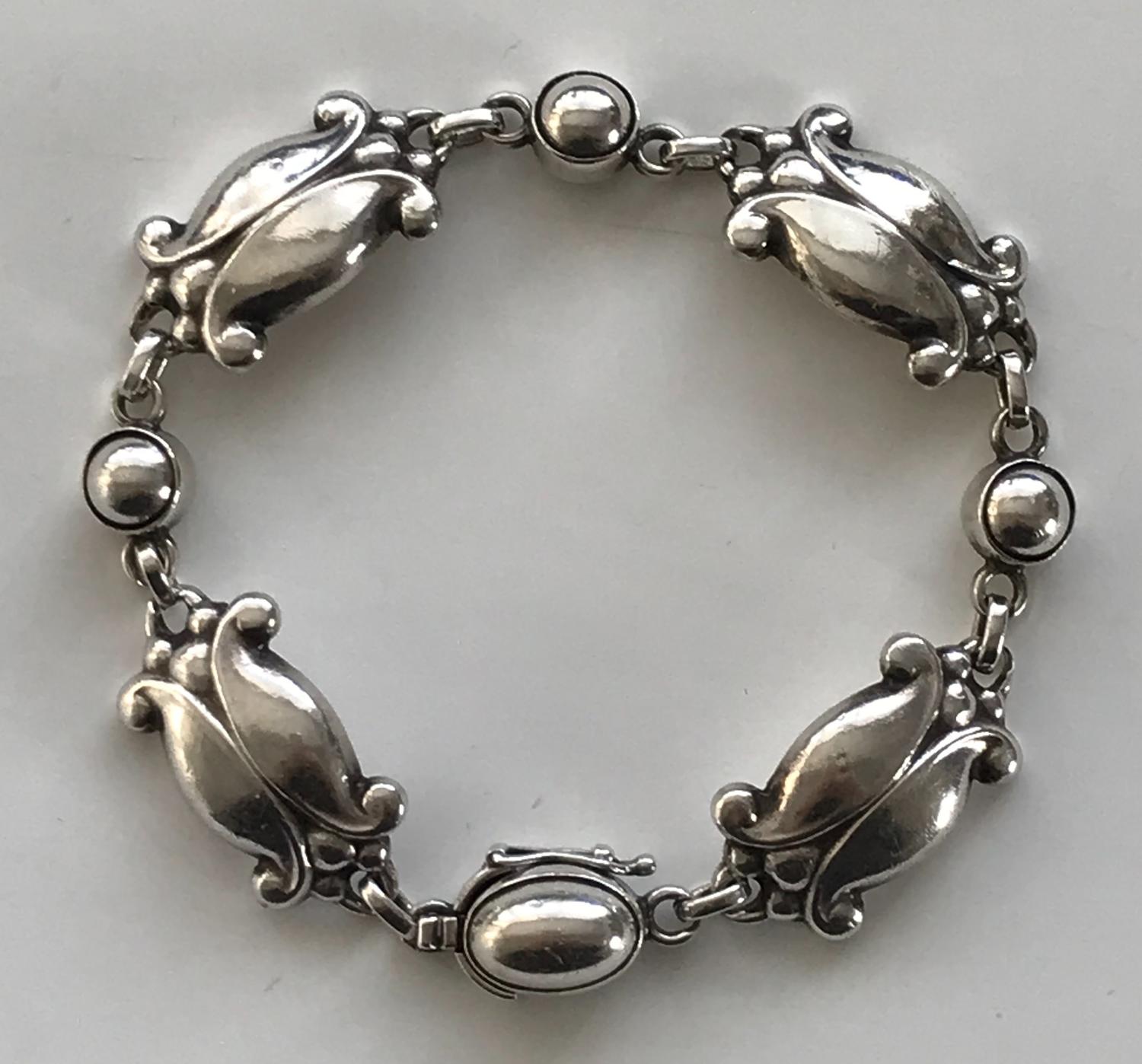 Just Andersen designed jewellery too but he is better known for his Art-Deco inspired work in bronze such as in this vase designed for the Swedish company GAB. 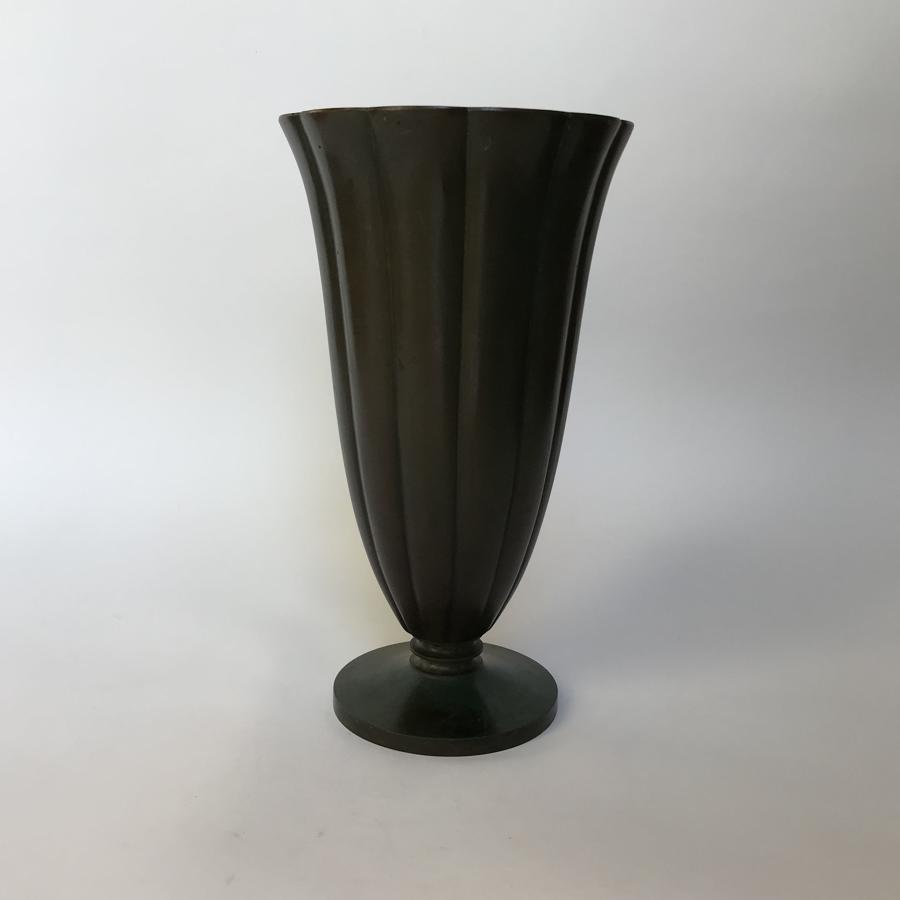 Among some of the greatest achievements, and best-known examples of the quality and beauty of Scandinavian design from the first half of the Twentieth Century, are their glass items. While a number of factories were in operation at this time including Kosta in Sweden, Holmegaard in Denmark and iittala and Karhula in Finland, some of the greatest work from this period was produced at the Orrefors factory in Sweden by leading designers such as Simon Gate, Edvard Hald and, a bit later on, Vicke Lindstrand and Edvin Öhrström. Specialising in etched glass, their elaborate designs led to the development of a particularly Swedish version of Art Deco known as Swedish Grace. 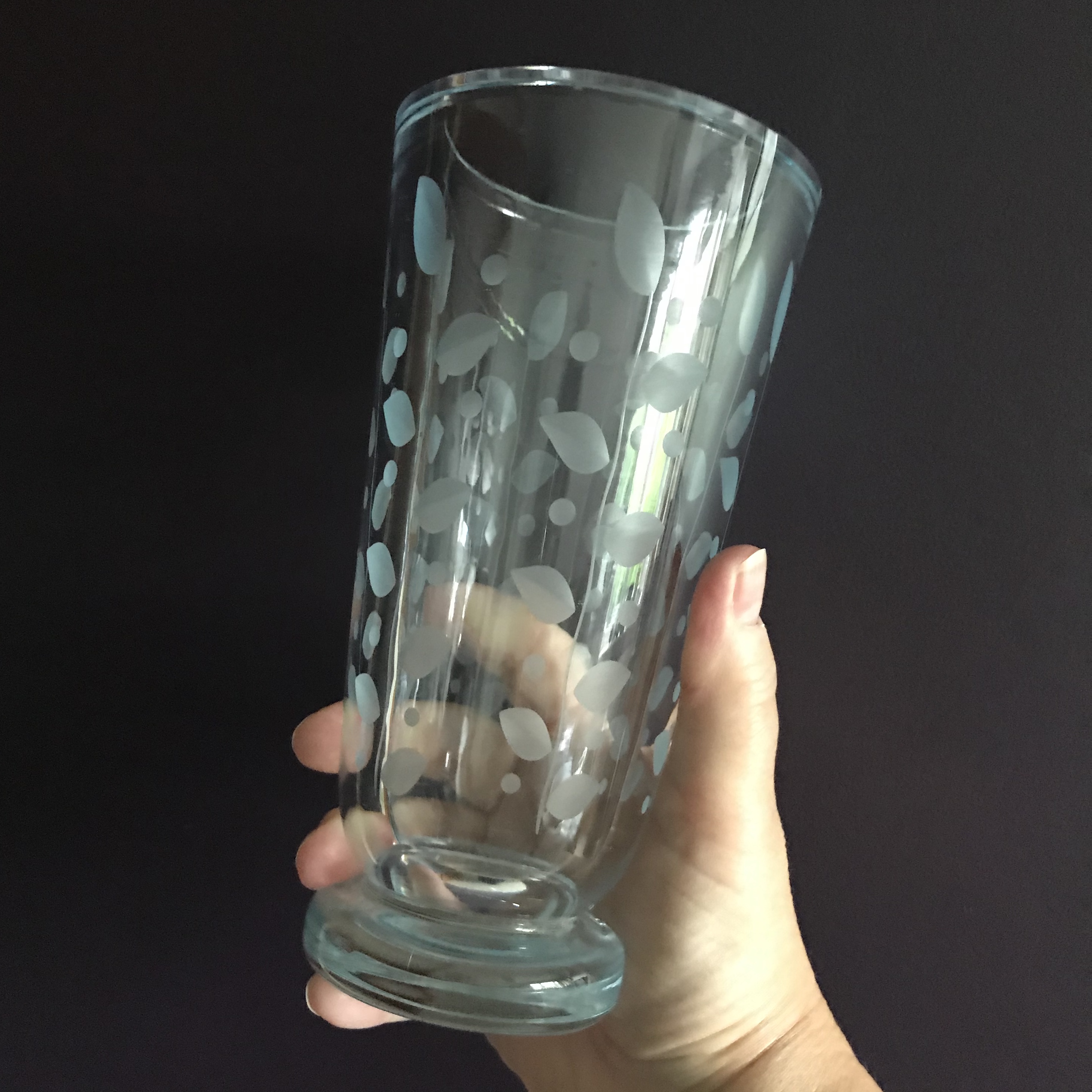 Similar influences can be found in ceramics too. Some of the greatest studio ceramics of the period were produced in Denmark by ceramicists who worked at the factories of Royal Copenhagen and Saxbo. Axel Salto, Jais Nielsen, Arne Bang and Knud Khyn produced some truly spectacular pieces that are now avidly sought by collectors world-wide, 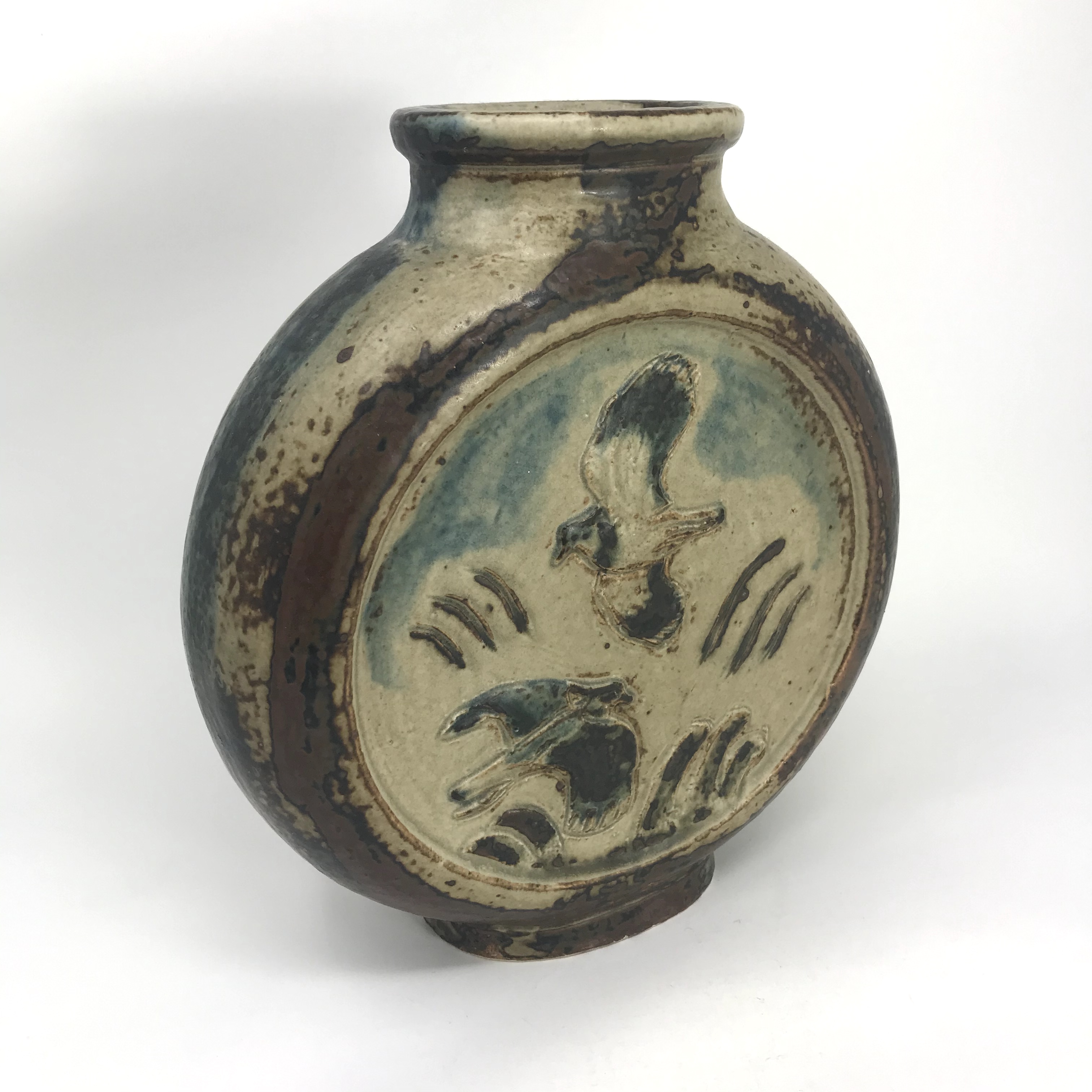 Beautiful and highly collectable though all these early pieces are, they are not what is typically associated with the Scandinavian look which embraced the clean lines and focus on functionalism found in modernism. In developing this new style the Scandinavians moved away from these earlier European influences to produce something quite distinctive and new. The first stirrings of a modernist look in objects for the home began in Scandinavia in the 1930s. Drawing on some of the design principles from modernist design schools such as the Bauhaus in Germany, ornamentation was pared back, shapes became less geometric and angular more biomorphic or serpentine and a desire to produce a new, sleek look for the machine age of mass consumption emerged. An early example is this glass bowl by Jacob E. Bang designed for Holmegaard in 1937. Stylistically this is a move away from the classical motifs and geometric shapes more typical of the Art-Deco style of the 1930s but it was made at the same time. 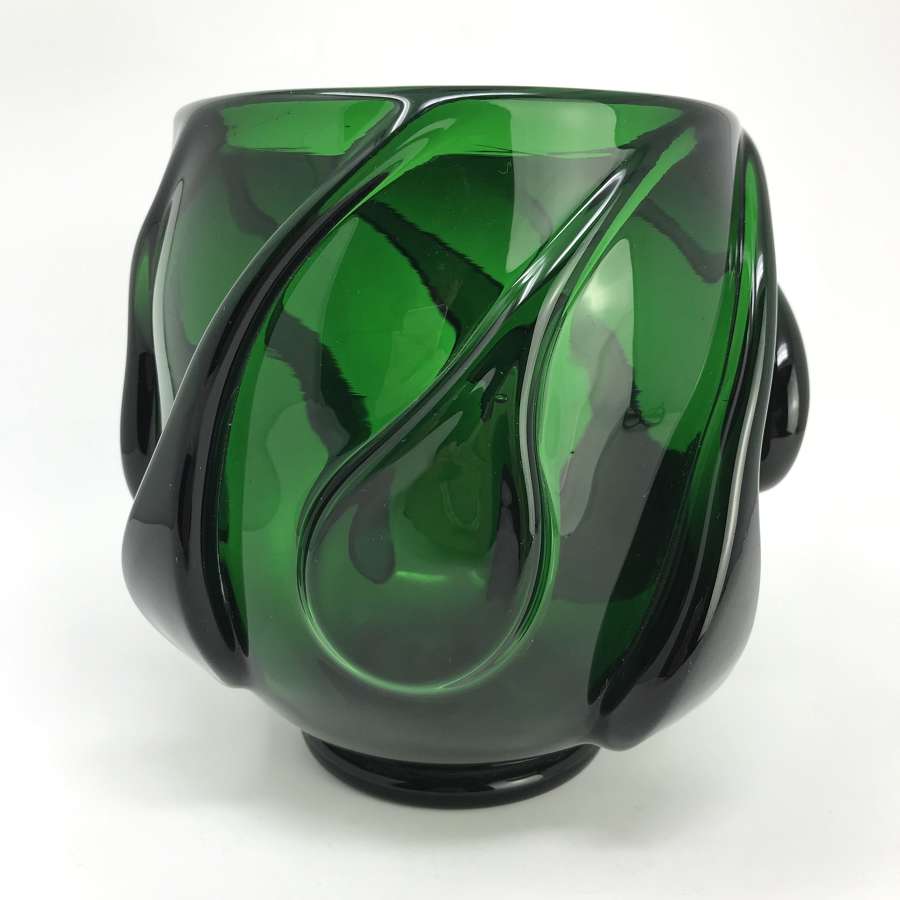 Perhaps one of the first and best illustrations a modernist aesthetic with its emphasis on simple form yet beautiful effect can be seen in this glass vase by the Finnish designer Gunnel Nyman. In her short life she produced only about a dozen or so designs in glass but they are arguably some of the finest pieces of Twentieth Century glass. Known as the String of Pearls vase she deliberately used a series of internal bubbles to catch the light and produce a series of repeating reflections depending from which angle you view it. The object is both simple and complex in its effect at the same time and an extremely beautiful work of art. 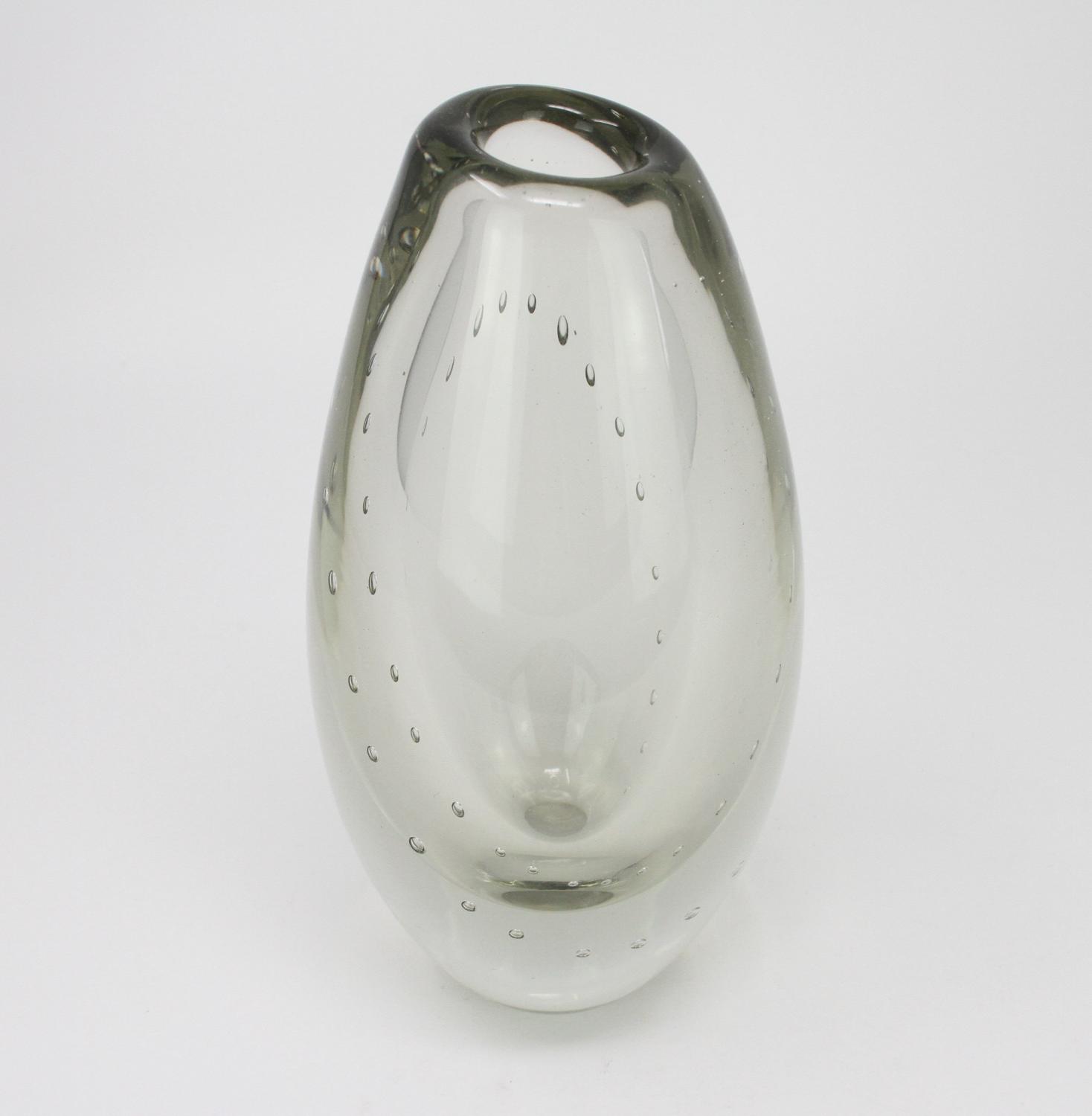 Glass design from Finland was truly inspired during this period of the 1940s and early 50s. Finnish designers like Tapio Wirkkala, Timo Sarpaneva and Kaj Franck led the way in transforming the style of both art glass and tablewares. 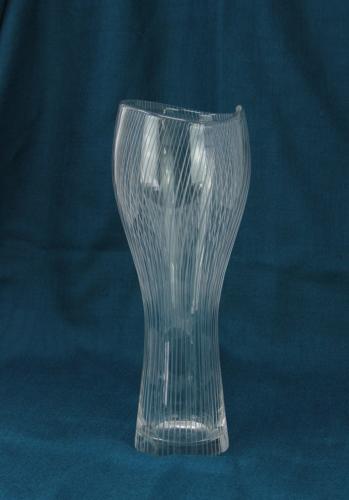 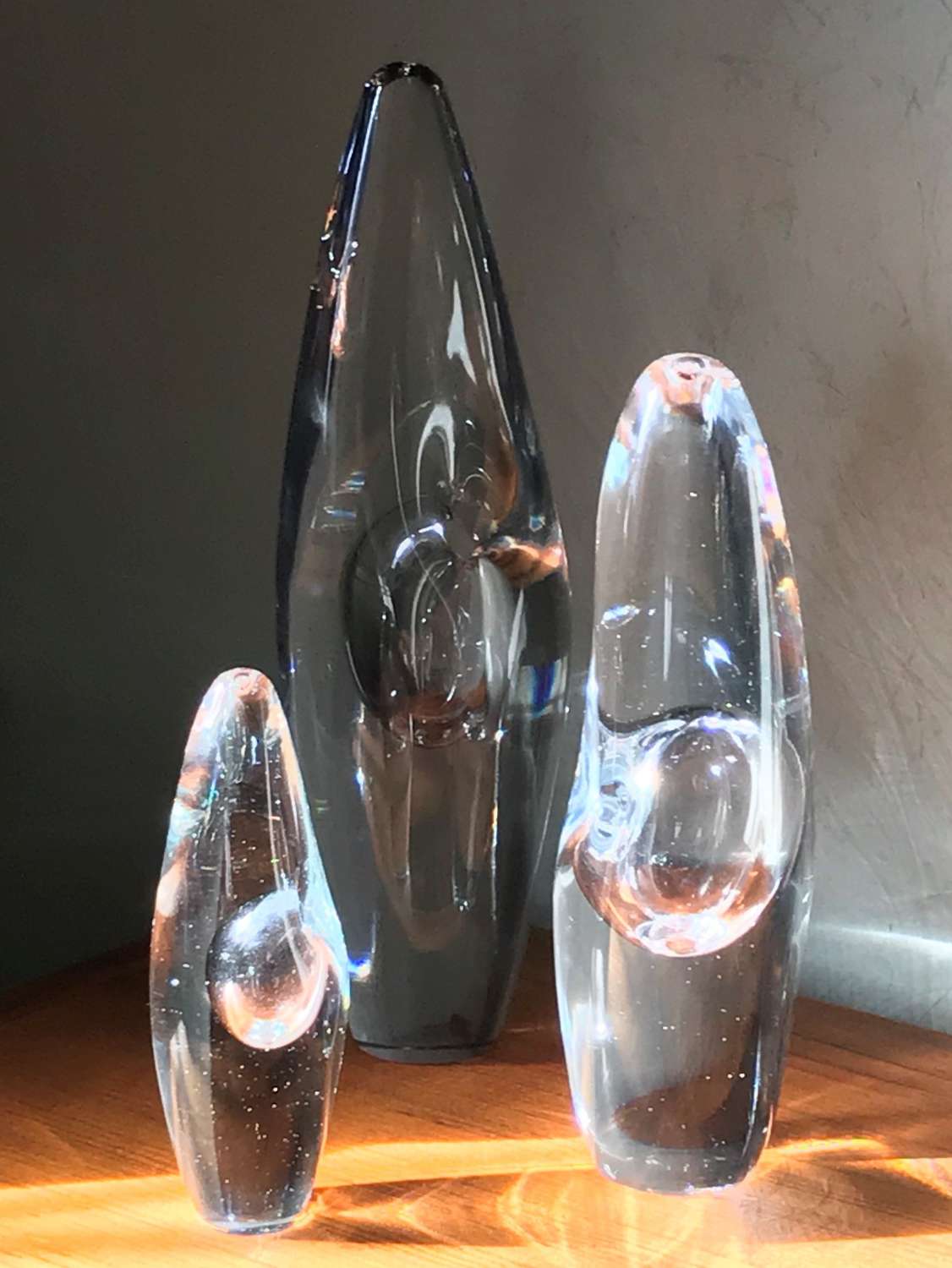 In Sweden similar developments were taking place at the Orrefors and Kosta glass factories with Vicke Lindstrand and Edvin Öhrström still at the forefront of the new design movement. Few could rival them in the development of glass making techniques such as in the use of layers of glass with internal colour to produce an intricate design (Graal glass) or glass which used both internal colour and air pockets to produce the design (Ariel glass) 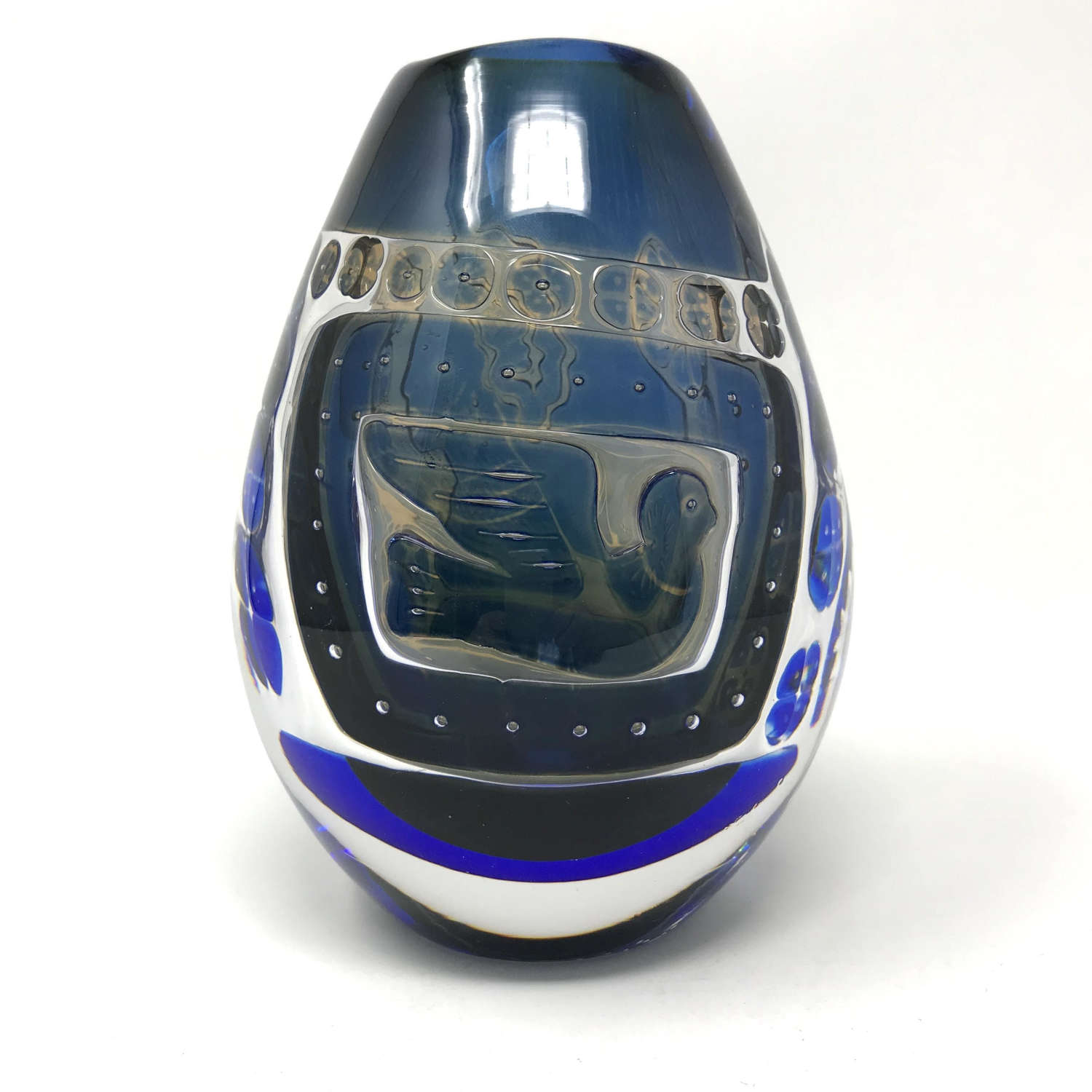 In ceramics, too, many ceramicists in Scandinavia were creating a distinctive look in the post-war years. A typical feature of the world of Scandinavian ceramics was not just the establishment of artisan studios that we might be familiar with from the Bernard Leach tradition of studio pottery in Britain but of art studios being set up within larger factories to produce unique studio works alongside mass-produced objects for everyday use. Two designers and ceramicists who illustrate well the different elements of the Scandinavian style in ceramics both worked at Gustavsberg in Sweden, Stig Lindberg and Berndt Friberg. Lindberg was a prolific designer who not only made unique studio pots he also designed cheaper ranges of studio ceramics and mass produced table wares. His colourful, quirky style and use of serpentine shapes is the look of the 1950s encapsulated, though in many cases his designs date from the 1940s making him a pioneering figure in this era. 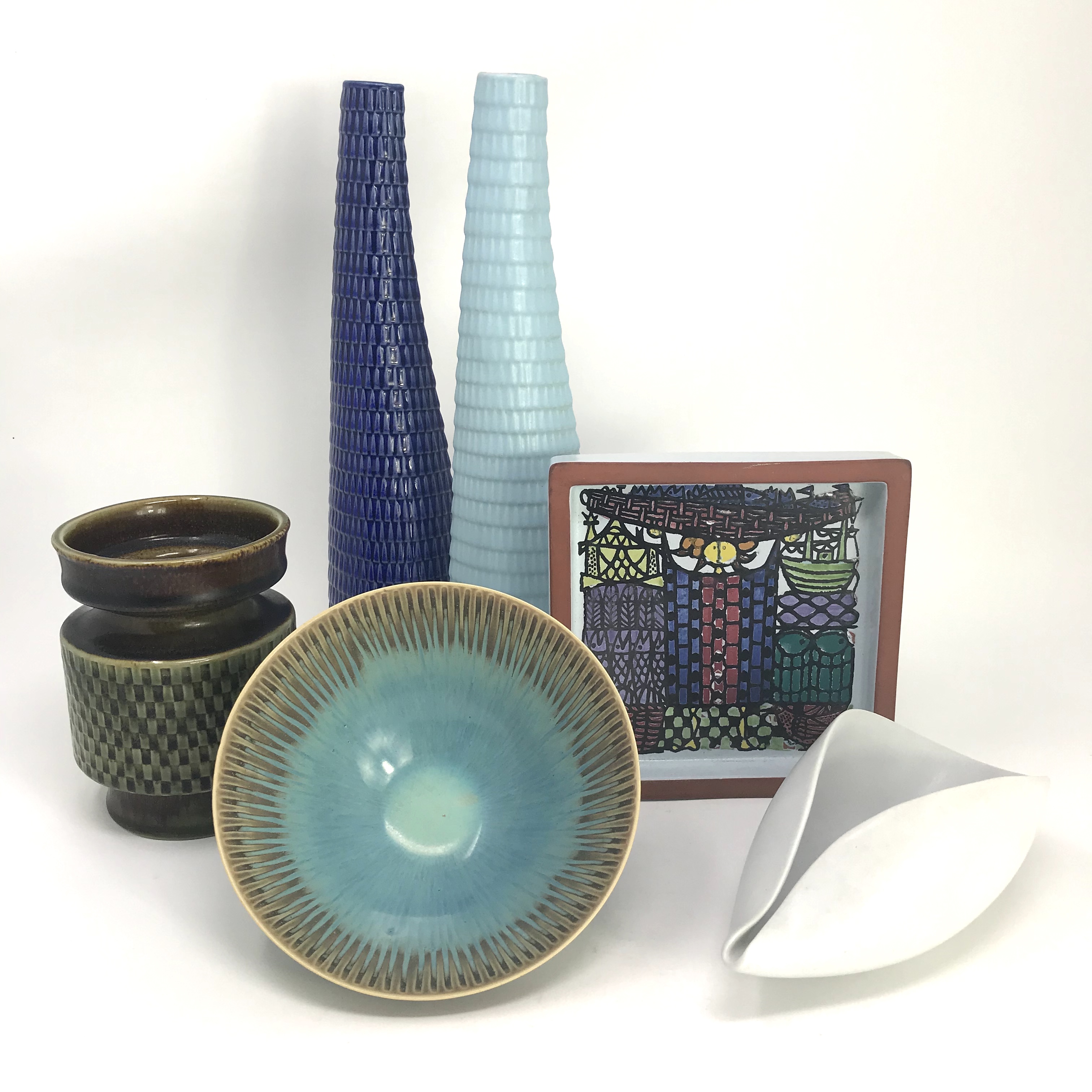 Berndt Friberg, on the other hand, was quite different and much more serious in outlook. He started out as a thrower for other designers before exhibiting his own work from the 1940s. Influenced by the ceramics of Japan and Korea, he added a touch of Scandinavian modernism with subtle fluidity in the shape and beautiful haresfur glazes as his hallmark. For their sheer potting quality, his work is unsurpassed and rivals the greatest works of some of the Japanese master potters. It is not for nothing that his nickname at Gustavsberg was “the Hand of God”. 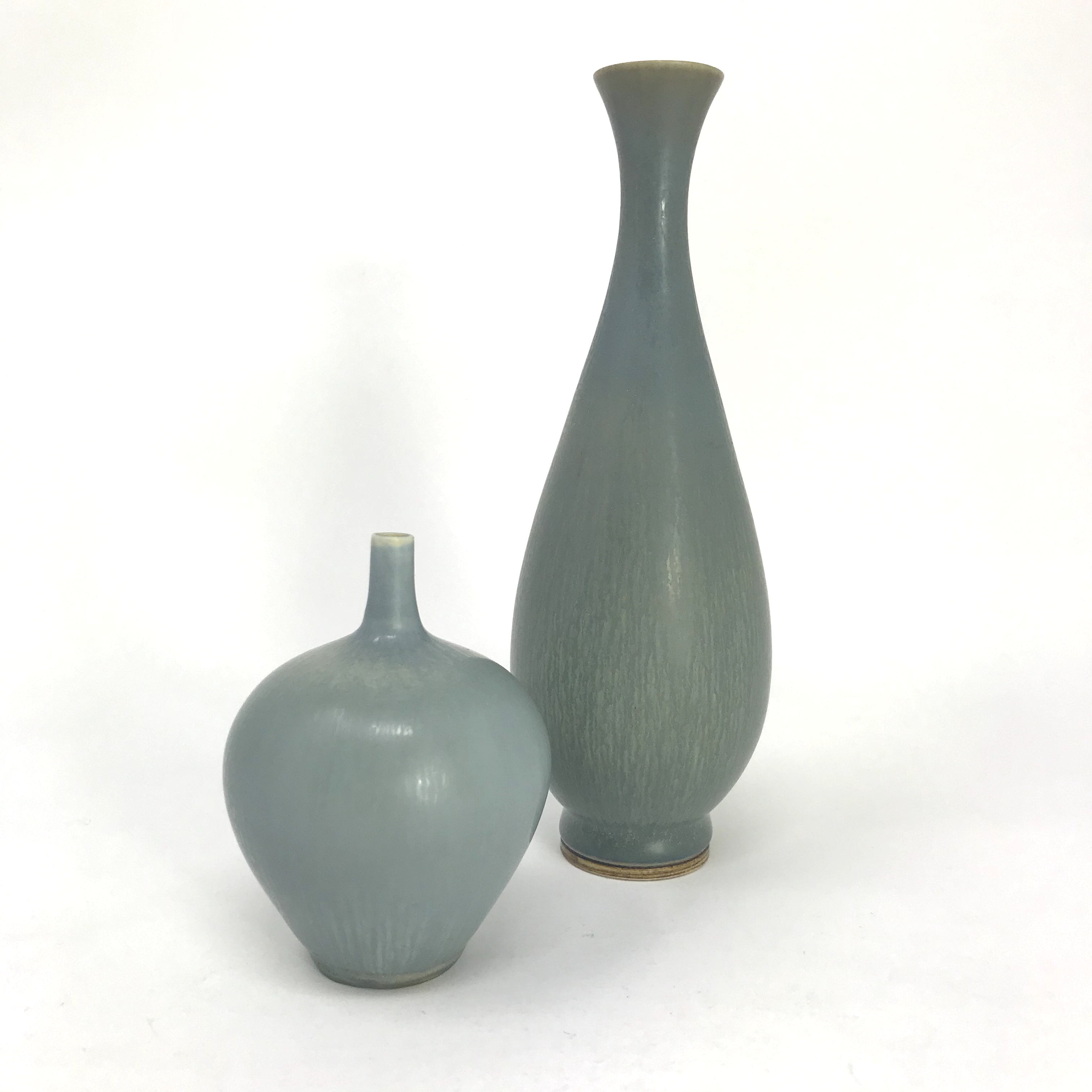 In jewellery, too, the more fluid, modern style became very popular. There were many studios prominent at this time such as David Andersen in Norway who specialised in enamel work, and Hans Hansen, Niels Erik From and Bent Knudsen in Denmark all producing great work in the modern style. But it is perhaps fitting to return to the Georg Jensen workshop. They worked with a series of designers such as Henning Koppel, Nanna Ditzel, Bent Gabrielsen and Vivianna Torun Bülow-Hübe who adopted the modern, Scandinavian look with its fluid shapes, simple but beautiful lines and unadorned simplicity. There are few items that better represent the beauty and accessibility of Scandinavian modernism than the jewellery of these designers in the 1940s and 50s. 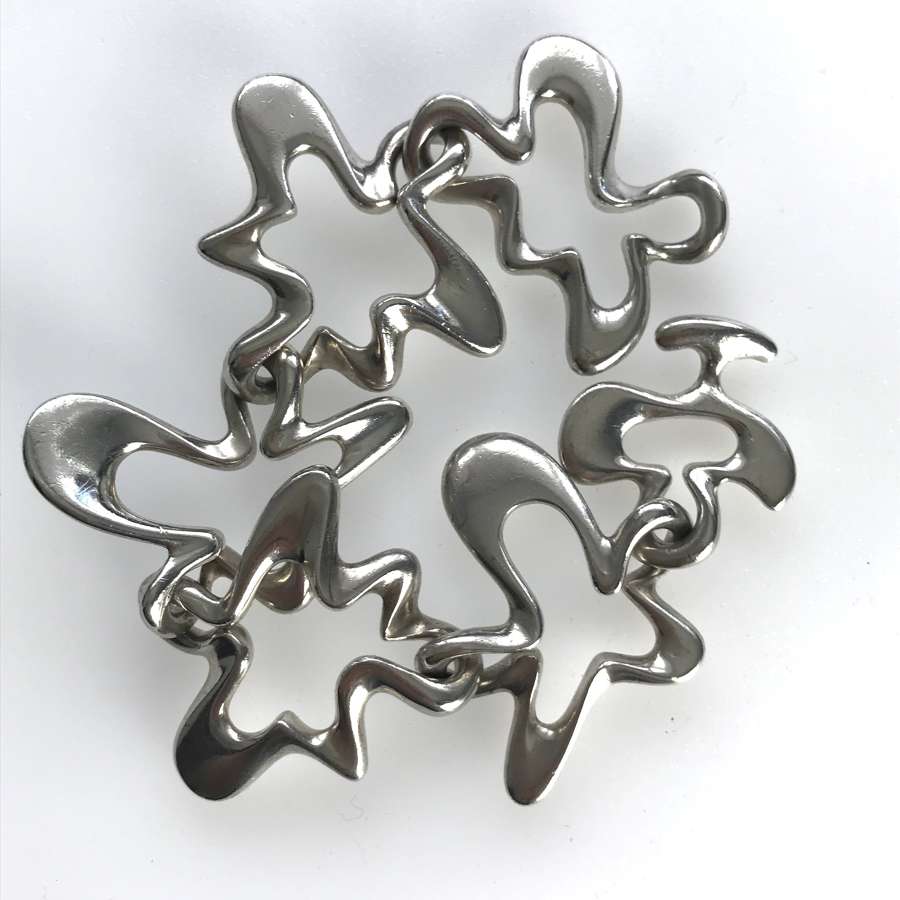 It will not have gone unnoticed that many of the designers mentioned here, except under jewellery, are men. Women, as was sadly too common during the last century, were typically not given as much prominence in the world of design as men and this has meant that they do not often get the recognition they deserve and do not feature as strongly as their male counterparts in written accounts and later collections. But there were many important women designers in the Scandinavian countries from Lisa Larson, Eva Staehr Nielsen, and Toini Muona in ceramics, Ingeborg Lundin, Nanny Still and Mona Morales-Schildt in glass, and Nanna Ditzel in furniture design. And we’d like to end by highlighting the work of one woman designer from Sweden, without doubt the greatest in her field, and one most influential of all the Scandinavian designers we have mentioned here, Märta Måås-Fjetterström.

In the world of Twentieth Century textile design her work is unsurpassed. She took what had previously been a peasant craft tradition and turned it into a modernist art form. She was commissioned to produce rugs for the Nobel Prize giving ceremonies in 1919 and after her death in her 50s in 1942 King Gustav V of Sweden and others set up a company to continue to produce her designs, so revered was her work in her native country. Examples of her work not only hang in the Royal Palace in Stockholm but can also be found in leading museums across the world such as the Louvre, Victoria and Albert Museum and Metropolitan Museum of Art.

Her designs are the embodiment of the Scandinavian style. They are both timeless and distinctly modern in their look and use of materials and epitomise the Scandinavian emphasis on craft production, simple design with a modern, progressive look, and with an aim of bringing beauty into the home and not just to palaces.

Scandinavian design changed the face of the second half of the Twentieth Century and brought modernism into the home in an accessible way. It is now starting to get the recognition it deserves as collectors begin to fully appreciate the high quality designs and beautifully crafted objects made in the post-war years. 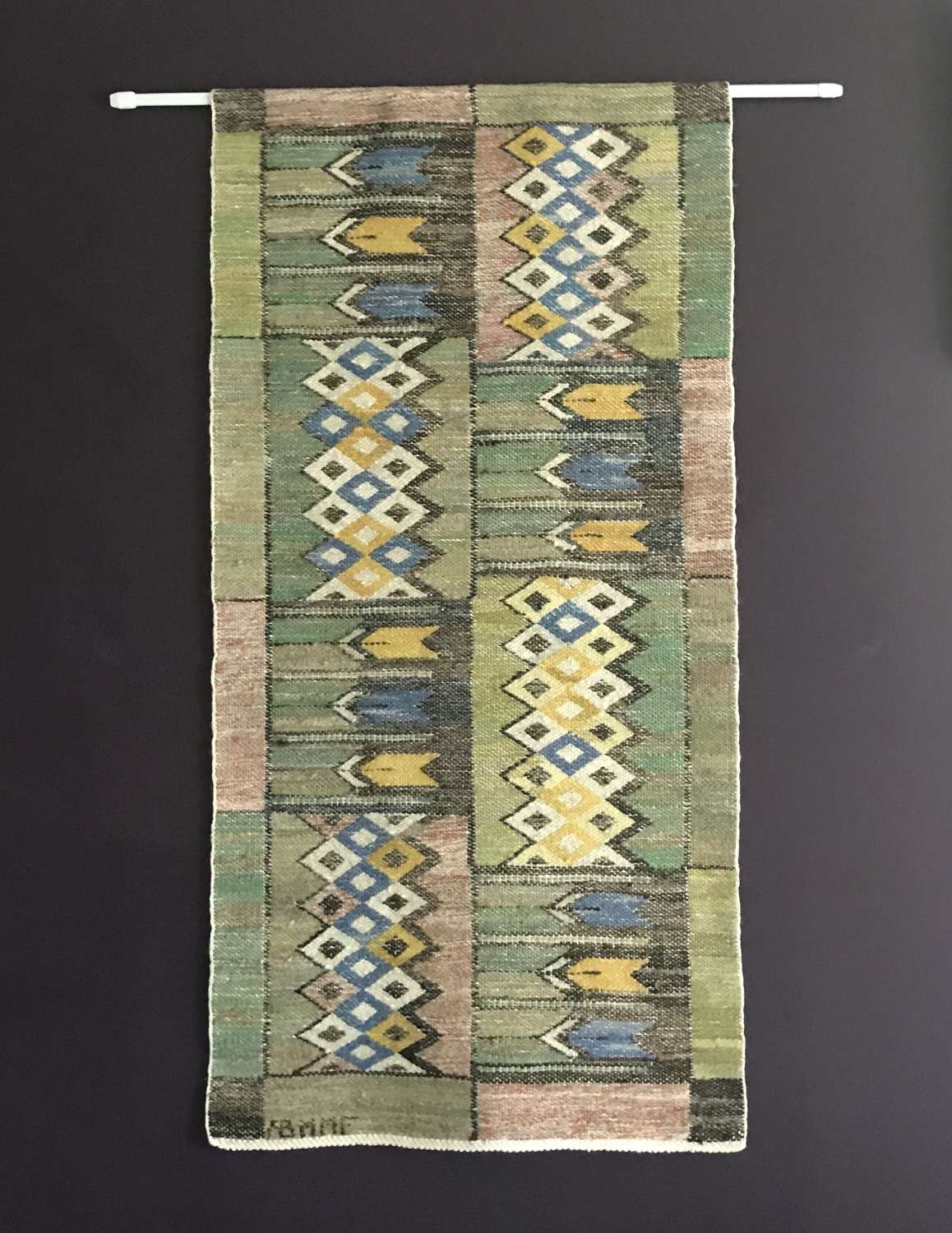 Please do not reprint without permission